From Ieper town railway station turn right off the ring road onto the N375 towards Dikkebus and Loker. Once in Loker the church is in front of you. The graves are either side of the church.

Just before the church you can see some memorials to French regiments and the fighting in this area in 1918. 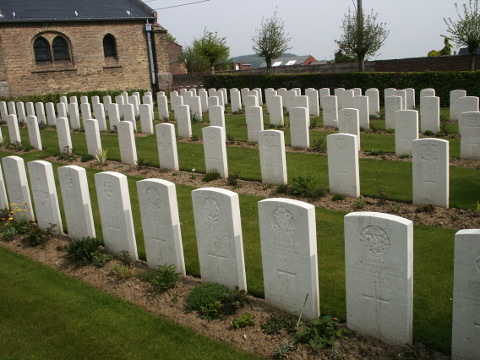 Right hand side of the church

Locre (now Loker) was in Allied hands during the greater part of the war, and field ambulances were stationed in the Convent of St Antoine.

The village changed hands several times between 25 and 30 April 1918, when it was recaptured by the French.

The hospice, or convent, was the scene of severe fighting on 20 May, but was not retaken until first week in July.

Loker Churchyard was used by field ambulances and fighting units from December 1914 to June 1917, and it contains two Commonwealth plots.

One grave was brought in after the Armistice. The churchyard contains 215 Commonwealth burials of the First World War. 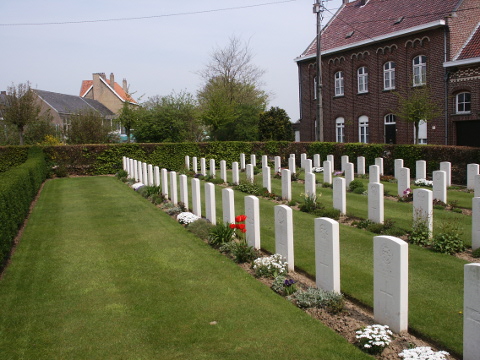 Left hand side of the church 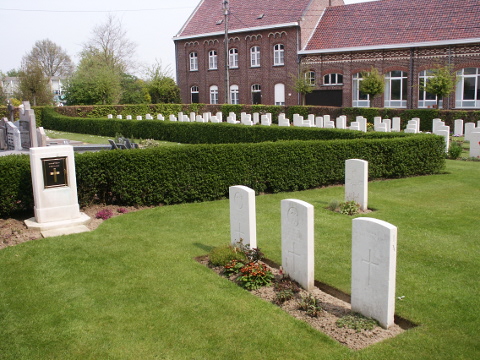 As you enter the left hand side of the cemetery, the first graves you come to have become quite famous in their own way. 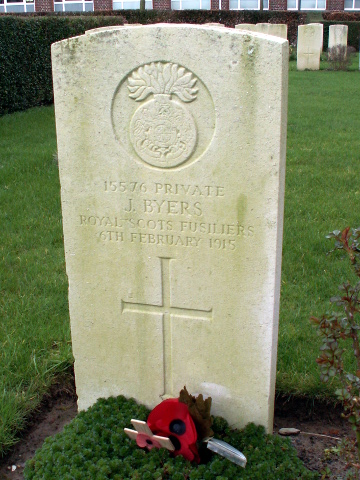 Young Byers is famous for having thought to have been the youngest soldier shot by the military authorities.

He gave his age as 19 but it had been thought that he could have been as young as 16. This has now been shown not to be the case.

On 8th January 1915 Byers was detailed as part of a ration party to collect supplies at Westouter. It would appear that Byers took the opportunity to go missing. What has always baffled me in cases like this is how the NCO in charge failed to notice that he was a man down, but there you go.

On 18th January Byers was spotted by a Gendarme walking along the Ieper-Poperinge road. Byers was arrested and later charged with attempting to desert.

Whilst being interrogated, Byers stated that he had been hospitalised at Kemmel for three days and had been, in effect, wandering the roads trying to rejoin his battalion.

At his Court Martial Byers admitted that he was guilty of attempting to desert and was duly sentenced to death.

Discipline in the 1st Battalion Royal Scots Fusiliers has been very bad for some time past and I think a severe example is very much wanted.

Smith-Dorrien also stated that he would have preferred the court to have insisted that Byers pleaded not guilty, thus ensuring that the evidence of witnesses was recorded.

Like Evans (below), he does not appear to have been able to put forward any evidence to show that he was making a real attempt to get back to his unit. Ultimately he admitted the offence, sealing his fate. 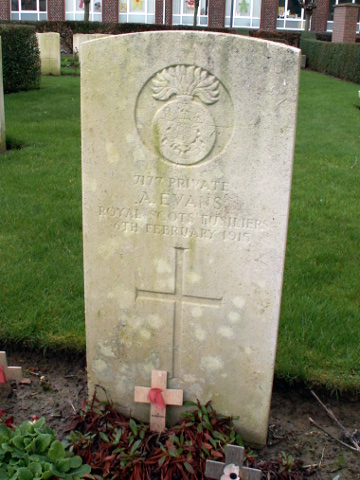 The same court that had tried Byers also heard the case of Private Andrew Evans from the same Battalion.

Evans had been a reservist when recalled in August 1914. Along with Byers he found himself billeted in Loker for the festive season in 1914. However, by New Year’s Eve, when the Battalion was ordered back to the trenches, Evans had disappeared.

Fifteen days later on 15th January, Evans was arrested at a farm near St George by a corporal from the French Army. He pleaded not guilty to being a deserter stating that he had been drunk on Christmas Day and had gone to Bailleul.

It must have been some session if it took him three weeks to recover and commence his return to his unit. The court took a similar view and within fifteen minutes Evans was sentenced to death for desertion. 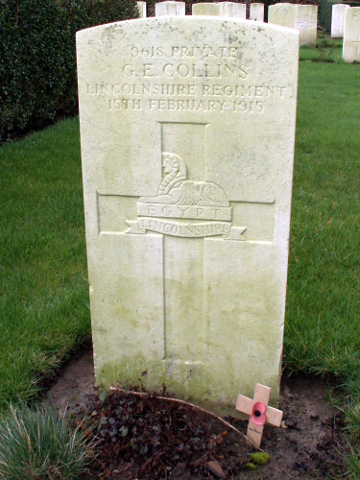 On the afternoon of 27th November 1914 the 1st Battalion Lincolnshire Regiment (billeted in Westouter) were ordered to return to the front line. It would appear that rather than get his kit in order Collins decided to get completely drunk.

The following morning, he later stated, he found himself in Paris and was unable to explain how he had got there. Following his arrest at Le Mans (south-west of Paris), he was brought back the 450 kilometres, to Westouter, and charged with desertion.

At his Court Martial on 7th February 1915 Collins stated that he had been sent to Le Mans to assist with horse transport but could produce nothing to prove that this was the case. Likewise, he could offer no reasonable explanation as to why, whilst everybody else was getting ready for the trenches he simply went absent and got drunk.

In the three days following his absence five men from his battalion were killed in action.

The court ignored Collins’s explanation that he had been intoxicated when he left his unit, and passed a sentence of death.

Collins was executed in Loker on 15th February 1915 and it is perhaps interesting to note that the following day a memorandum was circulated in which the Adjutant General wrote:

The Commander-in-Chief wishes to be assured that a good fighting man is not shot for absence arising out of (for example) a drunken spree. 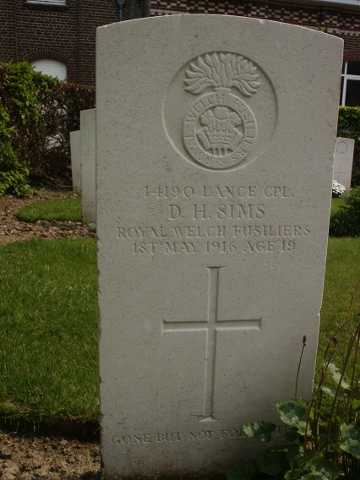