Webmatters : The Australian Memorial Park and Cobbers Monument at Fromelles

The Cobbers Monument at Fromelles

The village of Fromelles is 16 kilometres west of Lille and easily accessed from both there and Arras to the south. It is located on the road towards VC Corner Cemetery which is well indicated.

From Arras take the N17 towards Lens. This takes you onto the A211/A21 where you follow the signs for Armentières and then Lille at Junction 10. Remain on this road, N47, until it ends at La Bassée where you turn right onto the N41. At the Herlies roundabout you will see signs for Fromelles and the CWGC Cemetery at Pheasant Wood. Just follow these signs through Herlies. On Arrival in Fromelles you will see signs for the Australian Memorial which is a couple of kilometres further on from Pheasant Wood Cemetery and the Museum. 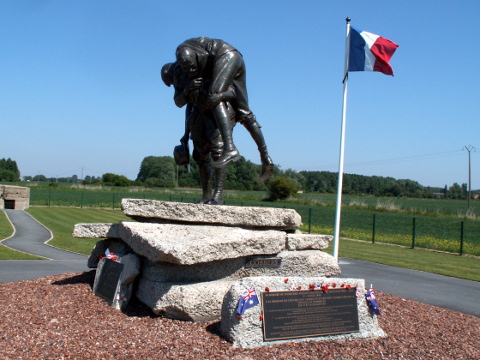 From Lille take the road towards Lens : the N41 which is reached from the A 25 Autoroute. At Herlies you will see the signs for Fromelles.

Note that the roads in the countryside around Fromelles are narrow and at times very twisting. Passing places have been put in and there is parking for a few vehicles at each of the main points.

Newly arrived in France the British 61st Division and 5th Australian Division were ordered to carry out a diversionary attack in front of Fromelles on 19th July 1916.

The plan had gone through numerous changes in the immediate run-up to the battle as circumstances and ideas changed at British Headquarters. The main objective of all the variants was to stop the Germans from diverting troops from Lille to support their front line on the Somme.

In the final version the troops involved were to take the German front line and continue on as far as their second line of trenches and remain there. Consolidating their position.

In front of the inter-divisional boundary was a German stronghold called the Sugar Loaf. The bombardment completely failed to neutralise it and this more than anything else caused the total failure of the assault.

Visitors to the area will note that the term ridge hardly seems to apply as Fromelles and Aubers are only a matter of perhaps ten metres higher than the surrounding countryside. However, from the top the British positions are clearly visible.

The final bombardment began at 1100 hours and at 1800 hours the British on the right and Australians on the left assaulted the 6 Bavarian Reserve Division (amongst whose units was Adolf Hitler’s 16 Bavarian reserve Infantry Regiment).

The machine guns in the Sugar Loaf crippled the British and Australian brigades trying to advance towards it. In many cases the wire had been uncut and almost none of the concrete bunkers dealt with. The British assault was stopped in its tracks.

Away from the Sugar Loaf and in the area of the Memorial Park 5the Australian 14th and 8th Brigades seized the Bavarians front line and then carried on, searching for the second line. They couldn’t find it because it didn’t exist.

Their orders having been to advance as far as the second line the Australians had not secured the front line — believing that everybody was advancing together.

Finding themselves amongst a system of old water filled shallow trenches and drainage ditches the Australians were reduced to bagging up mud in attempting to consolidate their new positions. These positions, moreover, were not continuous and as night fell the Bavarians began finding the holes between the battalions and reoccupied part of their front line — behind the Australians.

The end was inevitable. Having already suffered very high casualties the isolated groups realised that they were actually or threatened with being encircled. By 0900 hours on the 20th July those of them that could move had returned to their own trenches.

The British issued a statement saying that a number of raids had taken place to the south of Armentières: about 140 German prisoners had been taken. It made no mention of the 1,547 British casualties and the destruction of the Australian 5th Division.

In a single night the Division had suffered 5,333 casualties 400 of whom had been captured, Australia’s worst ever military defeat (More than Vietnam and Korea put together).

The Germans offered a truce in order to bring in the wounded but Major General McCay commanding the 5th Australian Division refused his permission.

Today a tall bronze figure of an Australian bringing in a wounded comrade commemorates this battle and the heroism of the many unknown soldiers who ventured out into no man’s land to bring in the wounded cobbers still there.

The statue is by Peter Corlett of Melbourne and was inaugurated on 5th July 1998.

It stands on the old German front line captured by the 14th Brigade and held overnight.

It is a depiction of a 40 year old ex farmer from Victoria : Sergeant Simon Fraser of the 57th Battalion AIF. Although permission for a truce had been refused over the next three days survivors of the 5th Division went out into no-mans land to retrieve their comrades.

Whilst he was out on the battlefield Fraser heard a wounded man shout out:

The injured soldier being duly rescued on Fraser’s next venture out.

Fraser was later promoted to 2nd Lieutenant in the 58th Battalion. He was to be killed at 2nd Bullecourt the following year. His body was never recovered and he is commemorated on the Villers-Bretonneux Memorial.

Behind the statue you will find German bunkers which had been subjected to damage following the war in an attempt to remove them. They now form part of this small memorial park.

View from the park

The park is on the German front line. If you face away from Fromelles towards VC Corner Cemetery, which was in no man’s land, you have the 14th Brigade coming coming towards you on a slight oblique from right to left. The 54th Battalion would be on your side of the road whilst the 53rd and Captain Arblaster were on the far side of the road. Off to you right came the 8th Brigade.

The Sugar Loaf is about 700 metres or so off to your left at about 45 degrees to the road from where you are.

In this area some of the Australians continued beyond where you are in search of the elusive second line. Lt Colonel Cass, commanding the 54th Battalion found a rather splendid German dug out off to your right about fifty metres or so beyond the bunkers.

Behind you is the junction with Rue Deleval (Easily confused with the Rue Delvas which is where you are). The first big farm you can see along Rue Delvas is Delaporte Farm.

It is all too easy to imagine the isolated groups of Australian soldiers being cut off by the Bavarian troops emanating from the farm.