Memorial to the animals, Couin

Couin is a village 15 kilometres east of Doullens. Visitors should follow the main Doullens to Arras road, N25, as far as the crossroads with the D23. Follow the D23 to Souastre, then the D2 to Couin.

Continue down the hill past the church. At the bottom at the junction you will see the memorial on the left side of the road. 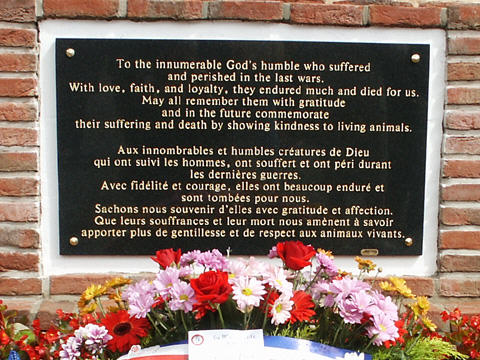 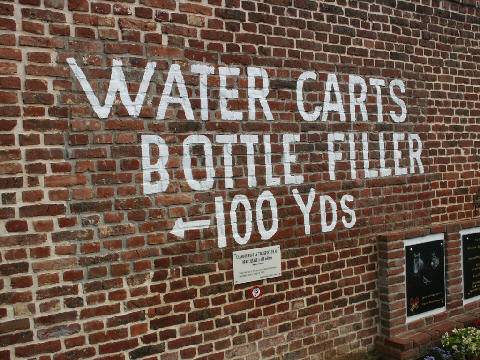 In this small village bordering on the Somme you will find a sign painted on the wall pointing British Carters in the direction of water supplies.

The sign is thought to have been put up by 94th Brigade in 1916 and has remained on the wall ever since, perhaps with a new coat of paint from time to time.

The 94th Brigade were part of 31st Division — The Pals Division that would be all but destroyed at Serre on the 1st July 1916. 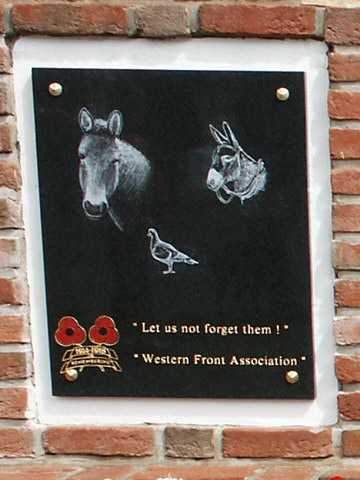 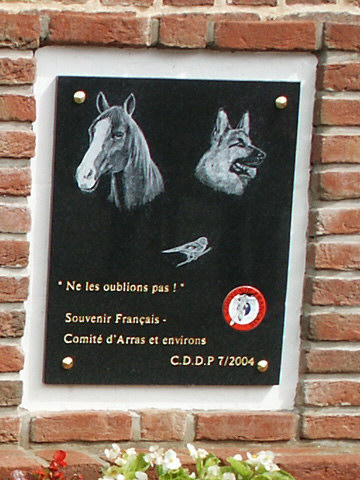 The owner of the wall was contacted with a view to erecting a permanent memorial for the millions of animals injured and killed during the Great War and those that have followed.

On 10th July 2004 a joint venture by Souvenir Français and the Western Front Association resulted in the erection of plaques commemorating all manner of beasts from horses and dogs, down to canaries.

Whilst the cost in human terms is well known, most of us tend to overlook the cost in animals who served in the same conditions as their human masters and often showed remarkable devotion and loyalty.

Following the ceremony, a temporary exhibition was created in the village church. Alongside pictures of dogs pulling machine guns, or some of the famous mascots of regiments were photographs of horses being stained a darker colour with potassium permanganate, or wearing their own gas masks. More surprisingly were photographs of pigeons also wearing gas masks.

At the beginning of the war the German Army had access to 4,000 dogs ready for various tasks, the French Army only had 150 and the British : zero.

The British Army lost about 3,000 horses and mules every week of the war.

The offshoot of the injuries was an advancement in veterinary medicine. Remedies and care had to be found for those that were simply exhausted by the long hours often struggling through the mud and mire of the rear areas of the battlefields.

Pigeons of course have been carrying messages for thousands of years, and canaries have been used down coal mines to detect gas. Following the first releases in 1915, gas became a danger to tunnellers and canaries found themselves under the front line. The Royal Engineers also used mice to detect gas.

There are two CWGC Cemeteries at the top of the village on the road towards Souastre and a single Australian burial in the Communal cemetery.