Kortrijk (Courtrai in French) is about 30 kilometres to the east of Ieper. Take the A19 Autoroute as far as Kortrijk and its R8 Ringroad. You need to take the direction Kortrijk Oost/Noord. This means coming off the autoroute and then turning around at the traffic lights to go back on yourself. Make sure that you are in the correct lane R8 Kortrijk Oost. Continue around the Ringlaan until Junction 5 marked Harelbeke. Once you have crossed the Leie river turn right at the major junction into Gentsesteenweg.

The Caribou is almost immediately on your right — within about 50 metres. There is just about enough room to park a vehicle. 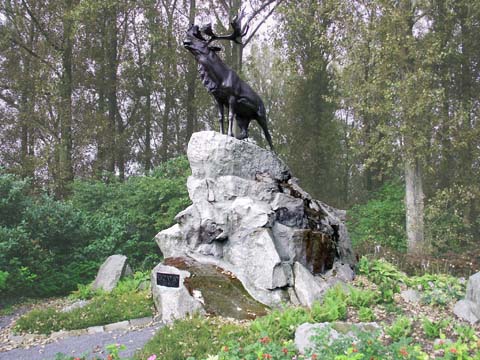 When the Germans launched their last great gamble in April 1918 — the Kaiserschlacht — the Royal Newfoundland Regiment were involved in defensive actions throughout the Battles of the Lys (In Belgium it is the Leie and you have just crossed it yourself — it continues on to flow through Gent).

In September they were transferred to the 28th Infantry Brigade, 9th (Scottish) Division, with whom they served for the remainder of the war.

The next few weeks of the war found the Division advancing over territory east of Ieper that had been won at great cost in 1917 and then lost so suddenly again earlier in the year.

Following a short period of reorganisation whilst the heavy guns were brought up, the general advance resumed on 14th October 1918 with the Battle of Courtrai.

On the northern flank of Second Army the 9th Division found itself with an enormous distance to cover before it could begin fighting in earnest. The Royal Newfoundland Regiment’s objective was the railway running north from Kortrijk — eight kilometres from their start line. If you continue around the Ringlaan for another few hundred metres you will cross the railway line.

Before they could reach their objective the 28thBrigade had to get across the River Lys between Harelbeke (where the Caribou is) and Bavikhove a little futher to the north.

Zero Hour was 0535 hours and the battalion discovered a number of German pillboxes in their path. The advance then found itself stalled by shelling from a German field gun on the right flank.

Private Ricketts volunteered to go with his section commander and a Lewis gun in an attempt to out-flank an enemy battery causing casualties at point-blank range. Their ammunition was exhausted when still 300 yards from the battery and the enemy began to bring up their gun teams.

Private Ricketts doubled back 100 yards under the heaviest machine-gun fire, procured ammunition and dashed back again to the Lewis gun.

They then drove the enemy and gun teams into a farm and the platoon was able to advance. They captured four field guns, four machine-guns and eight prisoners.

Thomas Ricketts a 17 year-old became the youngest winner of the Victoria Cross in the British Army. He survived the war returning home to become a pharmacist.

Over the next three days the British tried to get across the Lys but were repulsed — the Newfoundland Regiment suffering very heavy casualties. It would not be until the small hours of 20th October that the Regiment would be able to raft across as three Divisions finally managed to force the canal and river. 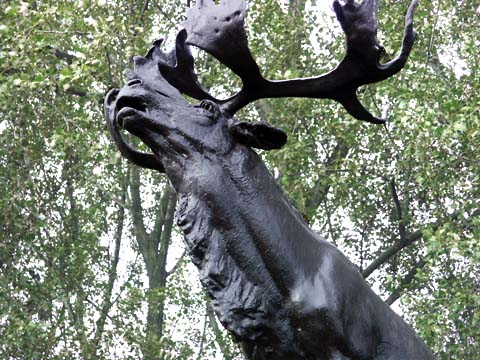