Abbeville is a major town situated on the banks of the Somme River near to its estuary. It is easily accessible either by the A16 coastal autoroute or the major road network. The D 1001 Boulogne-Paris Road (Formerly the N 1) runs north to south through the town whilst the D 928 connects with Doullens.

The church is on the Rue St Gilles which leads from the main town square towards Beauvais. At the Hôtel de Ville (Town Hall) turn right, driving down its right hand side. The church will be on your left opposite the former barracks.

Coming from Junction 22 of the A16 autoroute (or from Doullens/St Riquier keep left at the roundabout to join up with the autoroute exit) follow the signs for Beauvais descending the hill. At the next roundabout take right and then immediately right again. The route de Paris becomes the Rue St Gilles. At a large intersection with traffic lights you will see the old barracks on your left and the church in front of you. It is necessary to follow the dual carriageway right and then come back on yourself to reach the church.

This street like many of those in the town is Priority from the Right. Be prepared to give way to traffic coming from your right, especially in the area of the Tribunal (Courthouse). 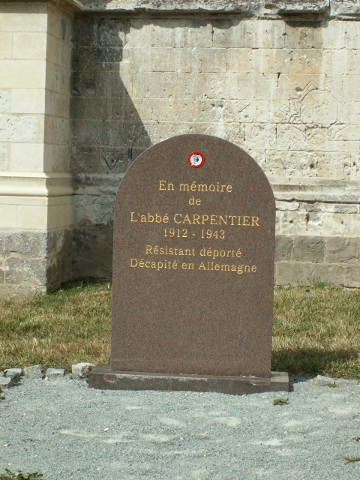 In memory of Abbé Carpentier 1912-1943. Deported member of the Resistance. Beheaded in Germany.

It was erected on 3rd September 2006 by Souvenir Français (A voluntary organisation dedicated to looking after the memorials).

The Abbeville Scouts carry his name and there is a square named after him in the town.

There is another commemorative stone to Abbé Carpentier in the communal Cemetery at Gavrelle.