Ors is a village about 30 kilometres away from Cambrai along the D 643 towards Le Cateau. Having driven through Le Cateau continue to the village of Bazuel and turn left towards Ors. Continue through the village to the canal — easier to park in the square and walk the few hundred metres. 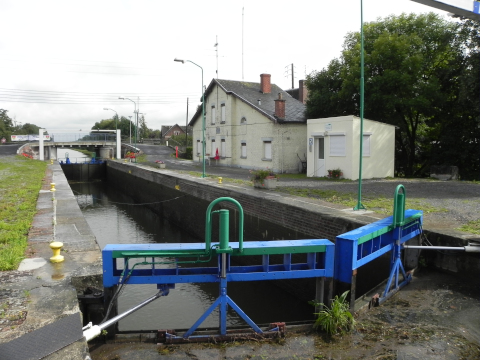 The canal lock at Ors

On 31st October 1918 as the war was coming to its close, the British Army was preparing to make an assault on the Sambre Canal to the east of Le Cateau. Amongst those present was the British war poet : Wilfred Owen, who was a Lieutenant in the 2nd Manchester Regiment.

Owen wrote home to his mother, from a cellar in the forest near Ors, how everything was going well, and that the war would be well over by the time she received the letter. A few weeks earlier he had been able to write how he had won the Military Cross by capturing a German machine gun and and scores of prisoners.

“I only shot one man with my revolver (About 30 yards!);
The rest I took with a smile.”

On the 4th November 1918 the assault began, but attempts by the Royal Engineers to bridge the canal were prevented by German machine gun positions on the far side and by heavy artillery fire. Casualties amongst the engineer ran high and the canal remained unbridged.

In the light of that failure the British tried using rafts, but they too proved ineffectual. 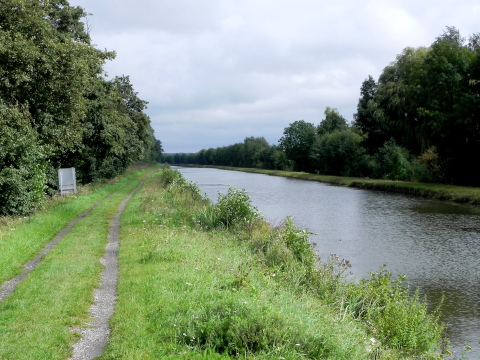 Wilfred Owen was killed somewhere near the bend in the canal

Standing at the edge of the canal encouraging his men to fashion together planks, Owen was hit, and killed.

At the point his men were attacking, the canal was never breached, and in fact his unit eventually crossed by a road bridge a few kilometres further south.

Shall life renew
These bodies?
Of a truth
All death will he annul.

The original has a question mark at the end of the last line as well. The change being made by his mother. She had heard of his death, as bells pealed out across the country to mark Armistice day a week afterwards.

There are two cemeteries at Ors, so be sure to visit the village one up near the Railway Station.

It is sign posted from the centre of the village along Rue de la gare.

Up at the top on the right looking towards the canal lies a small Commonwealth Cemetery. There you will find Owen’s grave alongside two of the four Victoria Cross recipients from that day :

The second cemetery in the village is a little further out. Return to the village and turn left following the signs for the British Cemetery — Rue d’Ouies. The cemetery sits in the middle of a field — beware of the cows which can sometimes be bulls !

Here you can find many of the engineers who were trying to put the pontoons and bridges across the canal that morning.

Heading back into the village turn left and within a hundred metres you will reach the canal and the lock gates.

On the right hand side you will see a memorial plaque raised by the Western Front Association.

On 4th November 1918, the British 32nd Division crossed the Sambre-Oise Canal here at Ors, in the face of strong opposition. During the assault four VCs were won. Among the casualties was the poet, Lieutenant Wilfred Owen MC, 2nd Battalion Manchester Regiment, who was killed on the towpath on this side of the canal about one kilometre north of the bridge.

At the 1962 Coventry Festival the composer Benjamin Britten presented his War Requiem to the world. A choral work which mixes the Latin Requiem Mass and the war poems of Wilfred Owen to powerful effect.

The cellar where Owen spent his last night can be visited.

He is buried in :