Webmatters : Chipilly : The memorial to the 58th (London) Division, the dying horse memorial

Chipilly is ten kilometres south-east of Albert and twenty-seven kilometres east of Amiens. From Albert, take the D42 in the direction of Morlancourt and Moreuil. As you pass through Morlancourt, on your left there will be a signpost indicating Bray and Chipilly. Turn left here, cross over the D1 Bray road south to Chipilly.

The monument is on your left as you arrive at the crossroads by the church. There is parking available at the Mairie next to it.

If you turn left towards Étinehem (left hand side of the church) you will find the Communal Cemetery with CWGC Plots situated to the far left and an Extension to the rear of the cemetery. 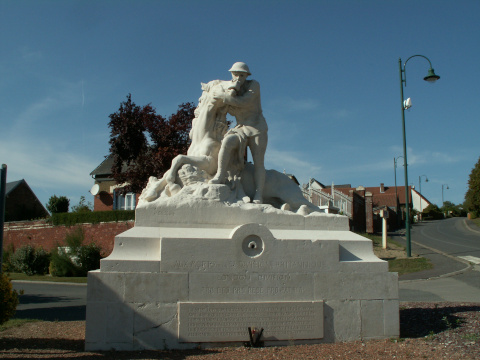 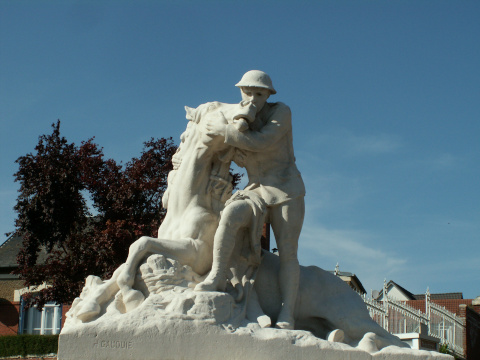 Having countered and held the various German offensives throughout the Spring and early Summer of 1918 the Allies began their counter-attacks in July with a French assault on Soissons. The Allied Commander in Chief, Maréchal Ferdinand Foch, followed this up with a Franco-British assault on the German position around Amiens on 8th August 1918.

The general axis of this offensive was along the main road from Amiens towards Roye. It was led on the British side by the Canadian Corps south of the railway line and the Australian Corps north of it : the French First Army advancing on the right of the Canadians.

The 58th Division (with the 18th Division on their left) had the task of covering the Australians’ left flank along the ridge of the Somme river. If you have ever driven the ridge you will be aware that it provides splendid views over the Somme valley whilst being cut by a number of very steep ravines.

Chipilly is at the bottom of one of these.

Both British Divisions had been caught up in the fighting during the Germans’ Operation Michael in March and the 58th Division had taken part in the recapture of Villers-Bretonneux in April. The losses had been heavy and although partially made up, the new soldiers were very raw conscripts and numbers failed to make up for the loss of experienced NCOs.

To complicate matters even further, on the 6th August, two days before the planned Allied offensive, the 27 Württemberg Division had attacked the 18th Division and part of the 58th’s front. This did little to improve the morale of the British and required new jumping off trenches to be prepared as well as a recalculation of the covering artillery fire.

At 0420 hours on 8th August the infantry left their trenches and began following their rolling bombardment. One worry had been the village of Sailly-Lorette along the Somme river but that was taken care of and the 58th Division advanced to its first objective on the eastern edge of Malard Wood (it still exists on the Sailly side of Chipilly — though not as large as it used to be).

There now came a number of misunderstandings, for at 0845 hours as the troops were trying to follow the barrage out of Malard Wood, word was received that the final objective on the eastern side of the Chipilly spur had been reached. This was far from the case because the Germans in the village were putting up a spirited defence whilst at the same time causing heavy casualties to the Australians on the far side of the river.

Reserves were brought up and a renewal of the advance was planned for 1300 hours but once again reports from the air suggested that the spur had been taken and the bombardment was cancelled. When 2/2nd Bn London Regiment advanced two hours later they were met, once more, by a storm of bullets and forced to retire. A third attempt later in the evening also failed to make any progress.

With casualties running high III Corps asked for permission to bring up the 131st US Infantry Regiment from reserve. The regiment had a compliment of men as large as a British Brigade.

At 1615 hours on 9th August the 6th Bn London Regiment (down to an effective strength of 95 men) advanced out of Malard Wood towards the next wood, les Celestins (which hardly exists at all today. It is the small wood on the left as you head north out of Chipilly). They were completely held up by machine-gun fire from above on the spur and the village.

At this stage the 1st Bn Australian Infantry sent across a patrol and met up with the 2/10th London who had taken Sailly-Lorette the previous day and were in the area of Malard Wood. With the aid of a smoke screen they gained the village. K Company 3rd Bn 131st US Infantry joined in and by 2000 hours had set up a defensive line guarding the north-eastern boundary of the village.

When the main operation commenced at 1730 hours the bombardment fell short leaving the defenders on the spur unmolested. The attack was held up until the village below had been taken.

The other battalions of the 131st US Infantry did excellent work further up towards the crest of the ridge along with the remainder of the 58th Division. With word coming through that the Canadians and Australians had forced the Germans back a considerable distance orders were issued to advance on the old Amiens Outer Line and occupy it. 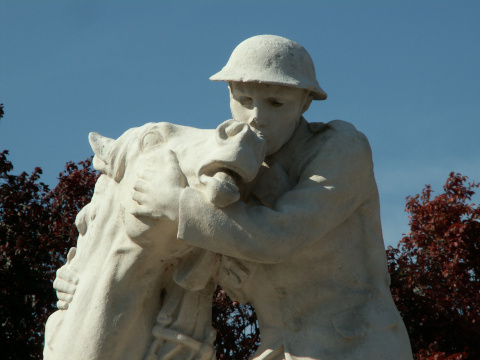 With its vivid image of an artilleryman and his wounded horse it is not surprising that the monument has gained a number of names, such as the dying horse monument. Locally it is is known as L’Artilleur britannique : the gunner.

The monument is the work of the French sculptor Henri Gauquié and was inaugurated in 1922 (five years before his death in 1927). Henri Gauquié was a well known sculptor and has a number of statues and memorials across northern France (he was born at what is now Villeneuve d’Ascq). One of his most visible works is the candelabra street lights on the Alexander III bridge in Paris.

Representing a gunner holding the head of his wounded horse the monument is quite exceptional for showing how animals also suffered and died during the war (millions of horses were killed).

The monument soon became as much a memorial to animals as the Division it was representing a priori. The inscription is, for the most part, in French.