Belloy en Santerre is forty-three kilometres east of Amiens just off the D 1029 main road towards Saint Quentin. It is right alongside junction 13 of the A1 Autoroute. Immediately after the autoroute turn left onto the D 79 and then left again into the Rue de Catalogne. 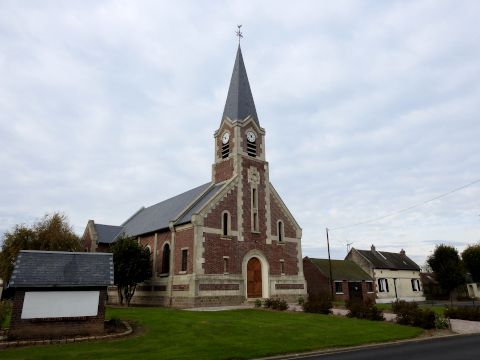 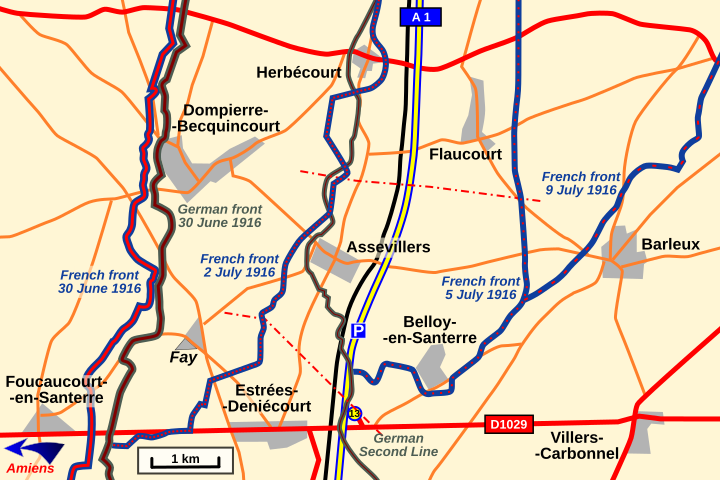 Following the very heavy casualties of 1915 the various regiments of the French Foreign Legion were reorganised into one unit on 11 November 1915.

It was now designated the Régiment de marche de la Légion étrangère (RMLE). At its formation it had a strength of about 70 officers and 3,000 Légionnaires.

In the French army a regiment was generally made up of three battalions which served together (like their German counterparts). Where this was not the case and the unit was made up of a mixture it was given the title of Régiment de marche…, in this respect it could be equated to a British Brigade where there would often be a mixture of different regiments. 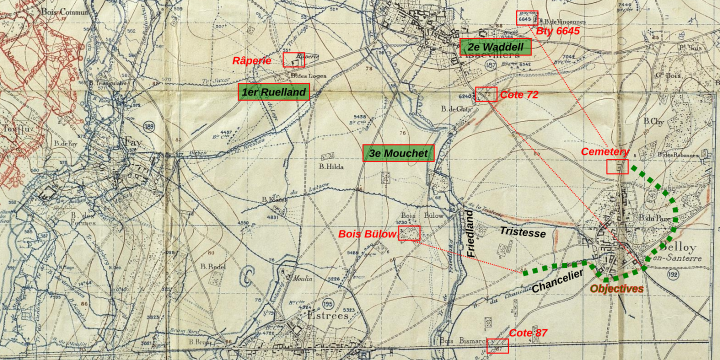 Observations throughout the 3rd July had noted that, having been pushed back, the Germans were working feverishly to reinforce their positions along the front, including Belloy. Orders were issued to continue the offensive with all rapidity before the Germans managed to finish their labour.

Although forming part of the Division Marocaine, the RMLE was attached to the 3e Division d’Infanterie coloniale for the assault on Belloy en Santerre.

As with many a French Regiment their War Diary (Journal de manoeuvres et ordres) refers to the battalions by their commanding officer rather than the number. If you refer to the map above you can get the general disposition of the regiment. Waddell on the left, Mouchet on the right and Ruelland in reserve.

There is a lot of talk about the mud of the Somme, but the opening days of the battle had been carried out in hot sunny weather. The RMLE had a slight upwards slope in front of them that was completely devoid of any cover. To give them every advantage the hour of the attack was fixed for 1700 hours so that the Germans would be looking directly into the setting sun.

That was the plan, however, as the regiment moved up, to take over their jump off positions, it clouded over and began to pour with rain.

Thirty minutes before Zero hour Mouchet’s battalion (3e Btn) was still slipping sliding its way forward through the communication trenches, now running with water. The Commanding Officer of the RMLE, Lt Colonel Cot, tried to get a delay on the assault but by then other units had already begun their assault.

As things turned out the 3e Bataillon scrambled into position just in time to commence their attack — without any chance to even look at the lie of the land.

On the left Waddell’s men (2e Btn) rushed forward and in two bounds stormed the village, gaining its eastern edges.

Mouchet’s men had no such luck. Coming under murderous fire from hidden machine-guns they found themselves up against a solid defence in the Tranchée du Friedland and then the Tranchée du Chancelier.

The battalion had lost all of its officers and most of its NCOs. The remnants battled forward whilst the multitude of wounded were forced to ground and lay out in the long grass. Then, from the village, they heard a bugler sounding the charge : Belloy had been taken.

By 1800 hours the village was in French hands. To their great surprise they had even found a villager hiding in a cellar.

The battle, however, was far from over as the Germans still held the high ground to the east of the village. To the south the offensive the 35e Corps had also been held up at Friedland and for that reason Lt-Colonel Cot ordered his reserve forward moving part of Ruelland’s battalion into the Boyau de la tristesse to cover any counter-attacks from the south.

In general the French use the word tranchée for a trench parallel to the front line and the word boyau for those perpendicular to it — often communications trenches.

During the night, German reinforcements arriving by vehicle along the main road from Villers Carbonnel carried out a number of counter-attacks on the southern edge of the village — all of which were beaten off. 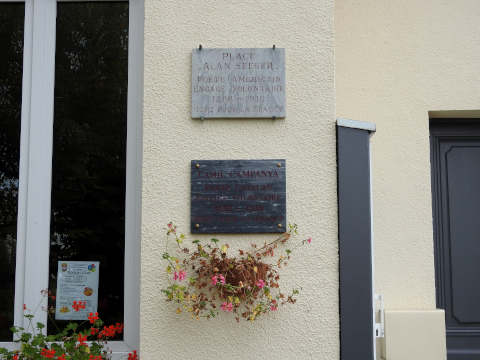 The attack had in many respects been a great success ; a fortified village had been taken and 750 enemy captured. The counterpart to the story being that those 750 prisoners represented more than the Legion had in remaining numbers.

In their short period of combat at the beginning of July 1916 the regiment lost :

Amongst the fallen was the American poet Alan Seeger, killed on the 4th July. He had been serving with the 11e Compagnie of the 3e Bataillon (whose commander, Mouchet, was himself killed).

His best known poem is called : I have a rendezvous with Death.

He is believed to be buried in Ossuaire No 1 (mass grave) in the French Military Cemetery at Lihons.

The village was reconstructed in part with aid from Barcelona and the Catalan poet Camila Campaña is also remembered within the village.

Commandant (Major) Ruelland was injured during the battle and later dies of his wounds at Marcelcave. He is buried in the French Military cemetery there along with a number of his men. 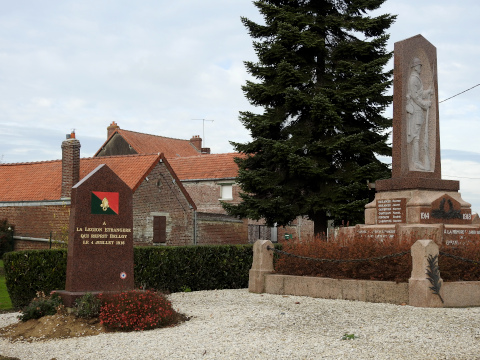 The monument was unveiled on the 100th Anniversary of the battle by Général Jean Maurin, Commanding Officer of the Légion Étrangère. Amongst others present was Stéphane Demilly, Député (MP), whose great-grand-father, Paul Hannecart, was killed at Belloy on 8 September 1916. 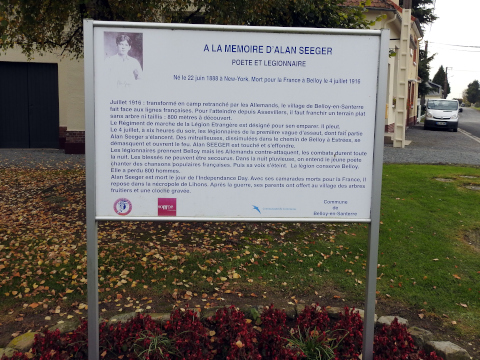 There are a couple of information boards alongside the monument.

Seeger’s parents offered the village a church bell called Charlotte Elisabeth (named after his mother) which was sadly destroyed in 1940. They also donated apple trees and a new one was planted on the 100th anniversary by Seeger’s niece, Peggy Seeger.

The American folk singer and social activist Pete Seeger was a nephew. Peggy is famous in her own right ; married to British singer Ewan MacColl, who wrote “The First Time Ever I Saw Your Face” in her honour.