The Ploegsteert Memorial stands in Berks Cemetery Extension, which is located 12.5 Km south of Ieper town centre, on the N365 leading from Ieper to Mesen (Messines), Ploegsteert and on to Armentières. From Ieper town centre the Rijselsestraat runs from the market square, through the Lille Gate (Rijselpoort) and directly over the crossroads with the Ieper ring road. The road name then changes to the Rijselseweg (N336).

This is at Sint Elooi and you will see a cannon and memorial at the junction.

Take the right hand fork N336 in the direction of Mesen.

Continue through Wijtschate and Mesen. The road will ascend Hill 63 (Note the information panels on the right) and then come down into Ploegsteert Wood. You will soon see the Ploegsteert Memorial on your right with a small cemetery and a café on your left.

The smaller cemetery is Hyde Park Corner and the Berks Cemetery Extension is the larger one next to the memorial. 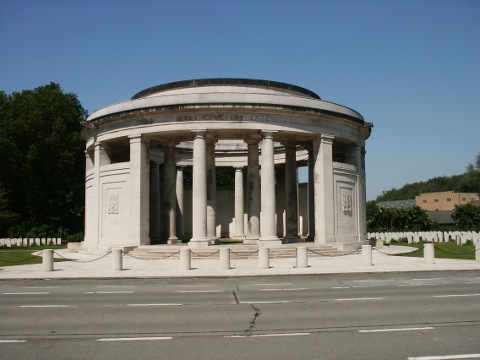 The sounding of the Last Post takes place at the memorial on the first Friday of every month at 1900 hours.

The casualties are arranged by Regiment (In order of precedence and not alphabetically) then their respective Ranks. It is usually easier to use the register to get the panel number rather than search blindly. 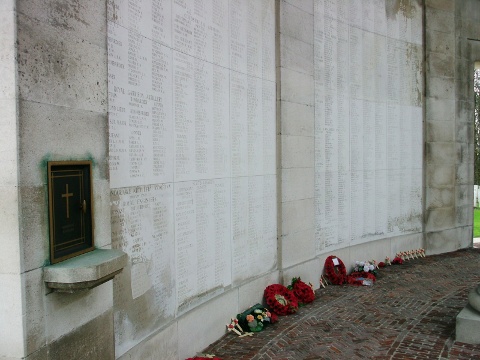 The Ploegsteert Memorial commemorates more than 11,000 servicemen of the United Kingdom and South African forces who died in this sector during the First World War and have no known grave.

The memorial serves the area from the line Caestre-Dranoutre-Warneton to the north, to Haverskerque-Éstaires-Fournes to the south, including the towns of Hazebrouck, Merville, Bailleul and Armentières, the Forest of Nieppe, and Ploegsteert Wood. 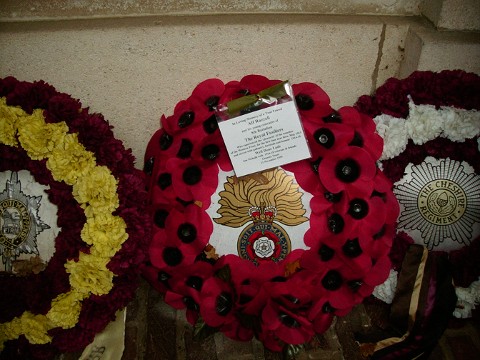 The original intention had been to erect the memorial in Lille. Most of those commemorated by the memorial did not die in major offensives, such as those which took place around Ypres to the north, or Loos to the south. Most were killed in the course of the day-to-day trench warfare which characterised this part of the line, or in small scale set engagements, usually carried out in support of the major attacks taking place elsewhere.

It does not include the names of officers and men of Canadian or Indian regiments (they are found on the Memorials at Vimy and Neuve-Chapelle) and those lost at the Battle of Aubers Ridge, 9th May 1915, who were involved in the Southern Pincer (the 1st, 2nd, Meerut and 47th Divisions – they are commemorated on the Le Touret Memorial). 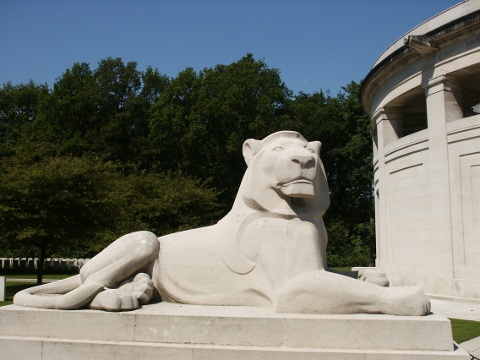 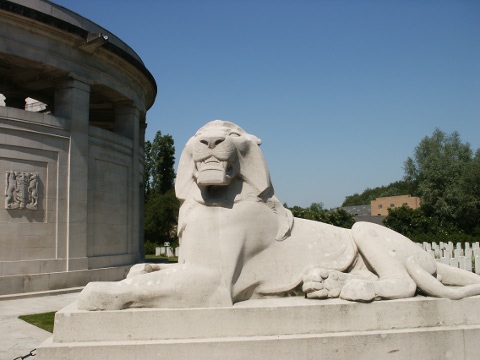 Berks Cemetery Extension, in which the memorial stands, was begun in June 1916 and used continuously until September 1917. At the Armistice, the extension comprised Plot I only, but Plots II and III were added in 1930 when graves were brought in from Rosenberg Chateau Military Cemetery and Extension, about 1 Km to the north-west, when it was established that these sites could not be acquired in perpetuity.

Rosenberg Chateau Military Cemetery was used by fighting units from November 1914 to August 1916. The extension was begun in May 1916 and used until March 1918. Together, the Rosenberg Chateau cemetery and extension were sometimes referred to as Red Lodge. Berks Cemetery Extension now contains 876 First World War burials.

Hyde Park Corner (Royal Berks) Cemetery is separated from Berks Cemetery Extension by a road. It was begun in April 1915 by the 1st/4th Royal Berkshire Regiment and was used at intervals until November 1917. Hyde Park Corner was a road junction to the north of Ploegsteert Wood. Hill 63 was to the north-west and nearby were the Catacombs, deep shelters capable of holding two battalions, which were used from November 1916 onwards. The cemetery contains 83 Commonwealth burials of the First World War and four German war graves.

The cemetery, cemetery extension and memorial were designed by Harold Chalton Bradshaw, with sculpture by Gilbert Ledward.

The memorial was unveiled by the Duke of Brabant on 7th June 1931. 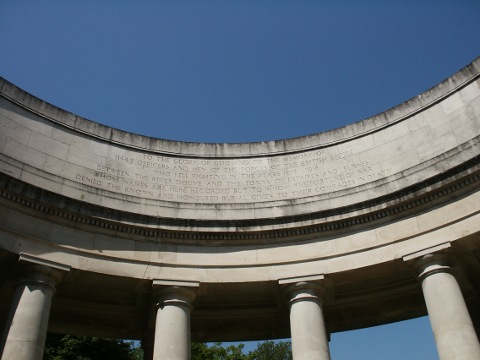 There are three recipients of the Victoria Cross commemorated.

For conspicuous bravery at Rouges Bancs on the 19th December 1914, in rescuing a severely wounded man from in front of the German trenches, under a very heavy fire and after a stretcher-bearer party had been compelled to abandon the attempt. Private Mackenzie was subsequently killed on that day whilst in the performance of a similar act of gallant conduct.

For most conspicuous bravery, devotion to duty, and self-sacrifice when in command of a flank on the left of the Grenadier Guards. Having been ordered to attack a village he personally led forward two platoons, working from house to house, killing some thirty of the enemy, seven of whom he killed himself. The next day he was occupying a position with some thirty to forty men, the remainder of his company having become casualties.

As early as 8.15 a.m., his left flank was surrounded and the enemy was enfilading him. He was attacked no less than four times during the day, and each time beat off the hostile attack, killing many of the enemy. Meanwhile the enemy brought three field guns to within 300 yards of his line, and were firing over open sights and knocking his trench in. At 6.15 p.m., the enemy had worked to within sixty yards of his trench. He then called on his men, telling them to cheer and charge the enemy and fight to the last.

Led by Captain Pryce, they left their trench and drove back the enemy with the bayonet some 100 yards. Half an hour later the enemy had again approached in stronger force. By this time Captain Pryce had only 17 men left, and every round of his ammunition had been fired. Determined that there should be no surrender, he once again led his men forward in a bayonet charge, and was last seen engaged in a fierce hand-to-hand struggle with overwhelming numbers of the enemy. With some forty men he had held back at least one enemy battalion for over ten hours. His company undoubtedly stopped the advance through the British line, and thus had great influence on the battle. 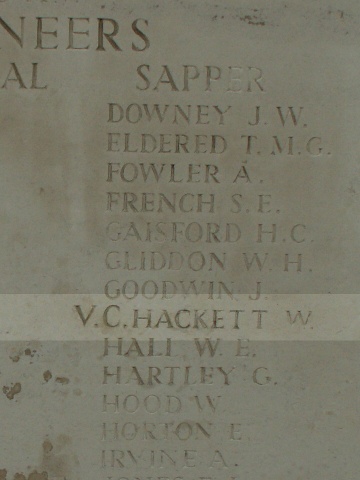 For most conspicuous bravery when entombed with four others in a gallery owing to the explosion of an enemy mine. After working for 20 hours, a hole was made through fallen earth and broken timber, and the outside party was met.

Sapper Hackett helped three of the men through the hole and could easily have followed, but refused to leave the fourth, who had been seriously injured, saying,“I am a tunneller, I must look after the others first.” Meantime, the hole was getting smaller, yet he still refused to leave his injured comrade.

Finally, the gallery collapsed, and though the rescue party worked desperately for four days the attempt to reach the two men failed. Sapper Hackett well knowing the nature of sliding earth, the chances against him, deliberately gave his life for his comrade.

William Hackett was the only Tunneller to receive the Victoria Cross. The man he was trying to save was Private Thomas Collins who is commemorated on the Thiepval Memorial. Both men lie where they were entombed at Givenchy lès la Bassée (near Béthune) where you will find the Tunnellers’ Memorial.

There are a number of pairs of brothers commemorated on the memorial (and at least one pair buried in the cemetery). 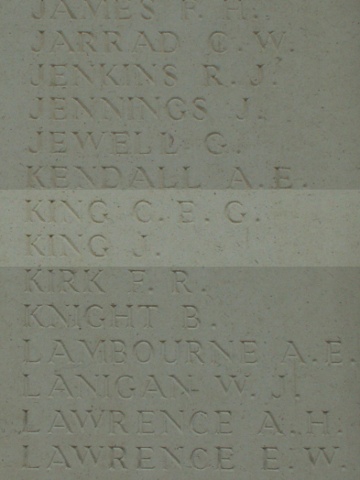 There are three executed soldiers commemorated. 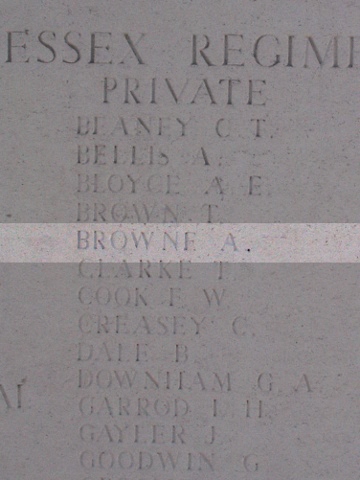 Browne had absconded in November 1914 but was quickly found by French Police in a house in Hazebrouck wearing civilian clothes. His tale of having been captured by the Germans was not accepted.

Hope had only been with his unit for a couple of months when he disappeared during a ration run. He was picked up masquerading as a Military Police Officer.

Pitts made off in the midst of battle and made his way to Boulogne trying to get back to England. Despite false ID papers he was identified and returned for Court Martial.