Boezinge is located north of the town of Ieper on the N369 road in the direction of Diksmuide. Leaving the town you will pass Essex Farm cemetery on your right.

On arriving at Boezinge turn right and cross the bridge at the traffic lights into Langemarkseweg. Follow the this road around to the right and after about a kilometre you will see a green CWGC sign towards Artillery Wood Cemetery. The cemetery is on the left hand side, about 250 metres from the junction of Langemarkseweg.

At this crossroads you will see the Breton Memorial which commemorates the French casualties of the first gas attack on 22nd April 1015. 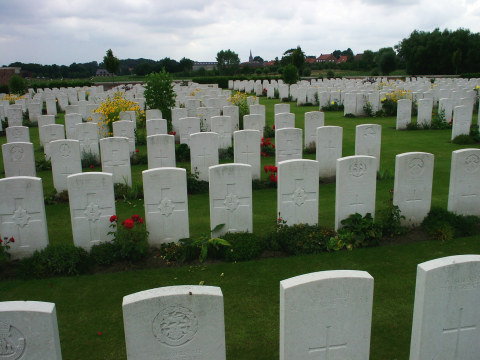 Until July 1917, the village of Boesinghe (now Boezinge) directly faced the German front line over the Yser canal, but at the end of that month, the Battle of Pilkem Ridge pushed the German line back and Artillery Wood, just east of the canal, was captured by the Guards Division. They began the cemetery just north of the wood when the fighting was over and it continued as a front line cemetery until March 1918.

At the time of the Armistice, the cemetery contained 141 graves (of which 42 belonged to the Royal Artillery), but it was then greatly enlarged when graves were brought in from the battlefields and small burial grounds around Boesinghe, including the following:-

There are now 1,307 First World War casualties buried or commemorated in this cemetery. 506 of the burials are unidentified but special memorials commemorate 12 casualties known or believed to be buried among them. 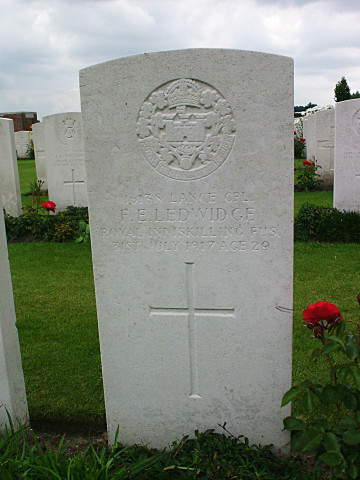 A prolific poet noted for his pastoral pieces about Ireland; his last poems made subtle reference to war.

He had already served in Gallipoli and Salonika with the 5th Bn of the Inniskillings before returning to France with the 1st Bn in December 1916. 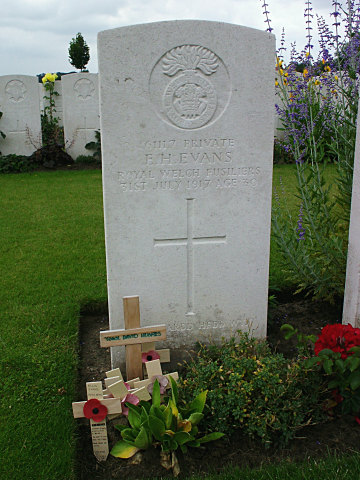 Writing in Welsh he had made a name for himself before joining up. A poem called Yr Arwr (The Hero) won him another prize (This time posthumously) at the 1917 Eisteddfod.

His poem, Rhyfel (“War”), remains one of his most frequently quoted works.

Gwae fi fy myw mewn oes mor ddreng,
A Duw ar drai ar orwel pell;
O’i ôl mae dyn, yn deyrn a gwreng,
Yn codi ei awdurdod hell.
Pan deimlodd fyned ymaith Dduw
Cyfododd gledd i ladd ei frawd;
Mae swn yr ymladd ar ein clyw,
A’i gysgod ar fythynnod tlawd.
Mae’r hen delynau genid gynt,
Ynghrog ar gangau’r helyg draw,
A gwaedd y bechgyn lond y gwynt,
A’u gwaed yn gymysg efo’r glaw
Why must I live in this grim age,
When, to a far horizon, God
Has ebbed away, and man, with rage,
Now wields the sceptre and the rod?
Man raised his sword, once God had gone,
To slay his brother, and the roar
Of battlefields now casts upon
Our homes the shadow of the war.
The harps to which we sang are hung,
On willow boughs, and their refrain
Drowned by the anguish of the young
Whose blood is mingled with the rain 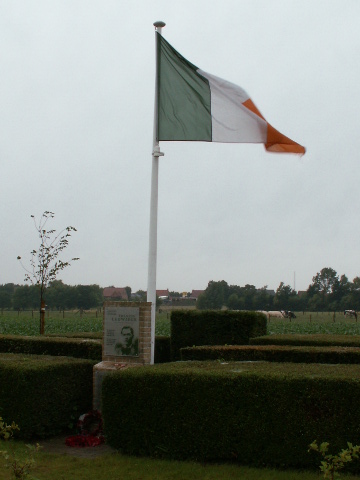 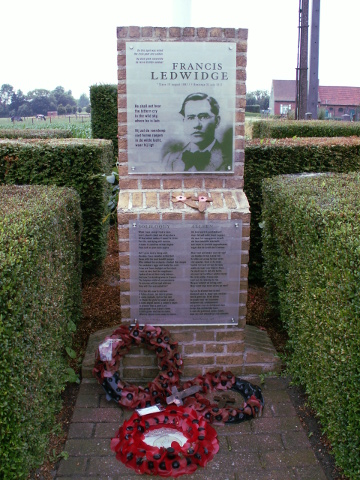 This monument is a short distance from the cemetery.

It marks the spot where the poet was killed in July 1917.

The plaque contains his poem Soliloquy.