Webmatters : Home rule and the forming of the new Irish Divisions

Some background about the Irish Divisions

How to tread carefully over Irish politics?
It isn’t easy but I shall try to give an even handed resumé.

By the time that war broke out in August 1914 the situation in Ireland was already approaching the possibility of open conflict between the two traditions as well as the British Army.

For some decades before the turn of the century Home Rule for Ireland had been a topic for debate within the British Parliament. In 1910 it became once more a deciding issue.

In a general election that year, the Liberal Party under Asquith had won but needed the backing of the Irish MPs, led by John Redmond, to remain in government. Redmond wanted Home Rule and was quick to pounce. The Irish MPs would support the Asquith Government as long as the Liberals gave Ireland, Home Rule.

In 1912 the Third Home Rule Bill passed the House of Commons and would pass its final legislative stage in May 1914.

Hardly surprisingly such a move brought immediate support from the three southern provinces of Ireland whilst in the northern province of Ulster support amongst the Catholic community caused the Protestants there to fear that if Home Rule was actually implemented their civil rights and religious freedom would be swiftly eroded.

Sir Edward Carson MP called upon all righteous Protestants to sign up to a covenant expressing their resistance to any such move — they were British, and were prepared to fight the British to remain so. 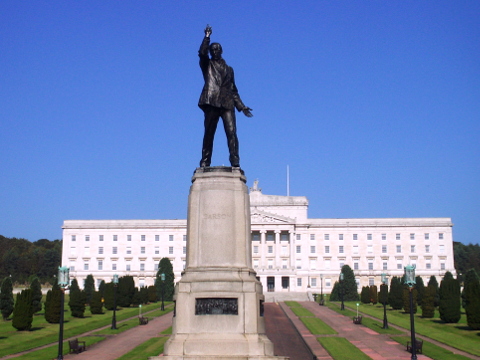 Although Redmond thought it was a bit of a bluff, both Carson and his ally James Craig, declared themselves ready to fight rather than accept Home Rule.

In the wake of Carson’s appeal, the 28th September 1912 was declared Ulster Day. On that day a Solemn League and Covenant was signed by men (some in their own blood) whilst women were allowed to put their names to a separate declaration. The total number of signatures recorded was 471,414.

Soon paramilitary organisations were formed by both sides under Carson in (for the sake of ease and modern parlance) the North and Redmond in the South.

The military wing of Carson’s political presence was to be the Ulster Volunteer Force.

Openly flouting law and order (In some cases forcing the Royal Irish Constabulary to remain in their own barracks) the UVF gathered, drilled and formed its own veritable army often with the aid of ex-officers from the British Army.

Such a formation did not go unchallenged, but whilst the National Volunteers counted 180,000 members amongst its ranks, it was never as well organised and bound by the one ideal as the 85,000 strong UVF.

What the UVF needed to really make the British Government sit up and take notice was: guns.

Thus on the night of Friday 24th April 1914 the UVF took over the Port of Larne outside Belfast and allowed a boat called the Clyde Valley to dock and offload her contents: rifles for the UVF.

Amongst other wealthy patrons who believed in Ulster’s cause and had supported the gun running was Rudyard Kipling.

In two months time on 28th June, Archduke Franz-Ferdinand would be assassinated and Europe plunged into war. The guns that had been shipped in to arm the UVF against the British/Nationalists were mostly German Mausers and Austrian Mannlicher rifles.

At the outbreak of the Great War all parties in the Home Rule affair agreed that for the moment there were bigger things at stake. The bill would be put on hold until after the war was over.

Redmond resisted the immediate impulse to consider that Britain’s woe was Ireland’s gain. The British Army was going to war on behalf of the rights of a small nation: Belgium. Here was a cause worthy of Irishmen from both persuasions — the right for small states to exist. An act of loyalty now would no doubt reap dividends later.

However Redmond’s desire to form an Irish Army were quickly turned down by the British War Office: Kitchener didn’t like the idea. Instead, three new Divisions would be formed from volunteers (Conscription was never actually introduced in Ireland as the government realised that they would never be able to enforce it — though it was considered in 1918).

For his part Carson feared that if his men joined the ranks of Kitchener’s New Army the British Government would try some deft trick to hand over the country to the Nationalists. He was thus wary about handing over his already well organised Ulster Volunteer Force to serve overseas. It should not be forgotten that everyone thought the war would be over within months.

The Royal Assent to Home Rule was given on 18th September. However it never actually came into law; even after the war had ended. That as they say is another piece of history.