Boezinge is a village in the province of West Flanders, north of Ieper on the Diksmuidseweg road (N369). From the station turn left into M.Fochlaan and go to the roundabout, then turn right and continue to the next roundabout. Turn left and drive to the next roundabout and then turn right into Oude Veurnestraat. At the roundabout turn left onto the Diksmuidseweg, and follow the road under the motorway bridge; Essex Farm Cemetery will be found on the right hand side of the road.

The obelisk is situated to the rear of the cemetery on the bank of the canal. 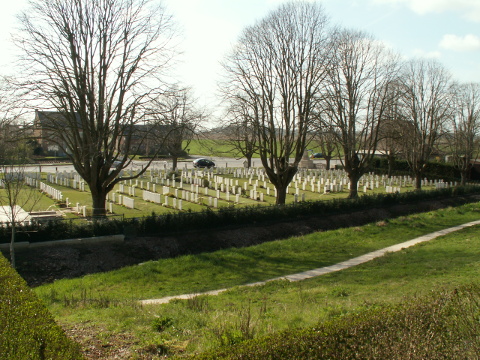 The 49th Division was a Territorial division drawn mainly from the north of England. It arrived in France in April 1915 and took part in the one-day wonder that was the Battle of Aubers Ridge. Moved to Belgium later in the year it was subjected to the first Phosgene gas attack (together with the 6th Division) on 19th December 1915. 120 men died during the attack and a further 900 were incapacitated.

Following the war the current location was considered the most fitting for the Division.

The obelisk is inscribed on all four sides :

The architects were : Brierly and Rutherford. The monument was inaugurated on 22nd June 1924 by Major General Sir Edward Perceval, who had been the commander of the 49th Division in 1915. The Commonwealth War Graves Commission are currently responsible for the monument.