Ville sur Haine is a town about seven kilometres to the north-east of Mons/Bergen. from the centre of the town take the N90 for a short distance before turning on to the N538 in the direction of Obourg. Continue along this road passing through the town of Havré.

On the far side of Havré you will come to a small bascule bridge as you reach the canal. Immediately after this bridge the road turns sharply right and as it does so you will see the George Price footbridge in front of you. There is a parking area a short distance further on from which you can cross the bridge to the plaque on the far side of the canal.

Or if you wish continue across the road bridge and then turn left into Ville sur Haine. Turn left into the Chausée de Mons and you will see the footbridge at the far end. The plaque is at the end of the street on your right. 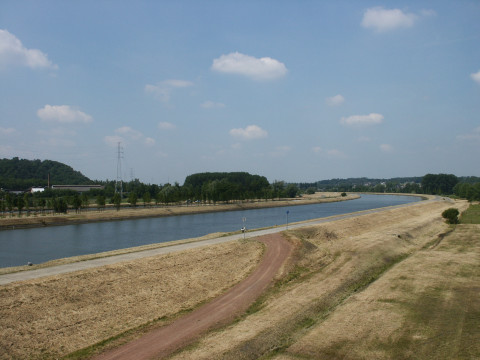 The modern (and now wider) Canal du Centre at Havre

On the 7th November 1918 a group of German plenipotentiaries had crossed the lines at the Pierre d’Haudroy to ask Maréchal Ferdinand Foch for an armistice. As supreme Commander in Chief of the Allied and American forces on the Western Front, Foch fully realised that whilst the Germans were not necessarily beaten militarily they were no longer capable of winning and both sides in the affair knew it.

Foch’s terms were severe and he had every intention of ensuring that the German army was harried right up until the last moment.

Over the next few days the Germans consulted with their new government back in Berlin (The Kaiser had been removed) before returning to Compiègne in the early hours of the morning of the 11th. At 0505 hours an Armistice was signed; to come into effect at 1100 hours on the 11th November 1918.

On the evening of the 10th the 28th Bn Canadian Infantry (Saskatchewan Regiment) were under orders to advance from Frameries (South of Mons) through the 19th Battalion at 0800 hours and then continue to the village of Havré and secure all bridges on the Canal du Centre in front of them.

At 0400 hours the battalion moved off passing around the outskirts of Mons to Hyon which they reached by 0700 hours. On their march forward they had witnessed numerous celebrations by the Belgians wishing to greet their liberators. The church bells in Mons were peeling and the Canadians felt at ease for the coming operation.

At 0800 hours the Canadians launched their attack against an enemy that seemed to have little will left to fight. An hour later as the Norwesters battled their way through the Bois de Havré a message was received from headquarters — All hostilities would cease at 1100 hours. 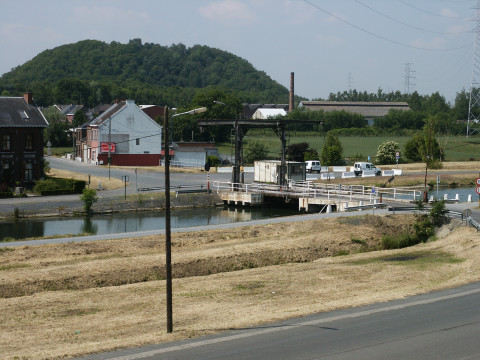 The bascule bridge on the canal at Ville sur Haine

By that time all their objectives were taken, the Germans were retiring and the civil population in Havré was out in the streets celebrating victory and an end to the occupation.

The Battalion suffered on this operation one casualty only Pte Price of “A” Company being killed by an enemy machine gunner at 10.50 hours. 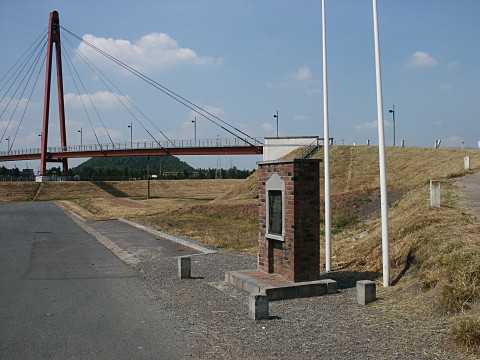 The monument to George Price and the new footbridge

Despite the fact that there was only to be a further two hours of combat, it was decided to press on towards the Canal du Centre and the objectives — but with all due care, there was little point now in getting embroiled in more bloodshed.

B Company had been the first into Havré followed by A Company. The Germans on the far side of the canal in Ville sur Haine could be seen retreating away from the canal.

There was little to no cover available for the Canadians and Private Arthur Goodmurphy near one of the bridges noted that on the other side the house gables had been knocked out to form loopholes. 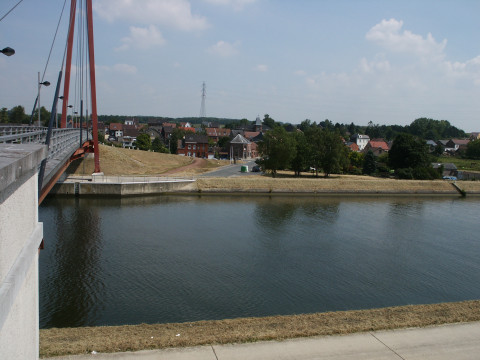 Deciding to go forward Goodmurphy rounded up four other soldiers including Private George Price and they made a dash across the bridge, charging into the end house by the simple expedient of knocking the door down.

Inside they found the owner and his son who told them (in French) that the Germans had fled by the back door some minutes beforehand. Next door it was the same story — an elderly couple, all too glad to see khaki uniforms.

Perhaps realising that the attacking Canadians were in fact nothing more than a small patrol the Germans recovered their aggression and opened fire from a small hill further up the street. Having managed to get into Ville sur Haine Goodmurphy and his compatriots were now stuck with the problem of getting back out again, across the exposed bridge.

The Belgians tried in vain to get them to remain in the house out of harms way but as Price stepped outside he fell back onto Goodmurphy mortally wounded.

A young Belgian nurse ran across the road but there was little that could be done for Price who had been hit in the chest by a single round fired. He died at 1058 hours and a few minutes later his four companions were able to carry his body, unmolested, across the bridge to the rest of the Battalion.

Their Company Commander: Captain Evans Ross was extremely upset that his men had carried out such a venture in the last moments of the war, but it would appear that neither Goodmurphy nor his party were aware of the news that an Armistice had been signed and had simply gone about their duty.

The official records state that Price was shot by an enemy sniper near the canal at 1057 hours. He was hit in the right breast and died shortly afterwards despite the attention paid to him by soldiers and civilians alike.

A native of Port Williams in Nova Scotia, Price was born on the 15th December 1892 had been working as a farm labourer in the town of Moose Jaw, Saskatchewan when he was conscripted on the 15th October 1917.

George Price is considered to have been the last Commonwealth soldier killed in the great war.

Originally he was buried in the communal cemetery at Havré, however he now rests in the Military Cemetery at St Symphorien (Grave V C 4) a few kilometres to the south. By chance he is surrounded by the first and last British soldiers killed in action as well as the first Victoria Cross recipient killed in action. 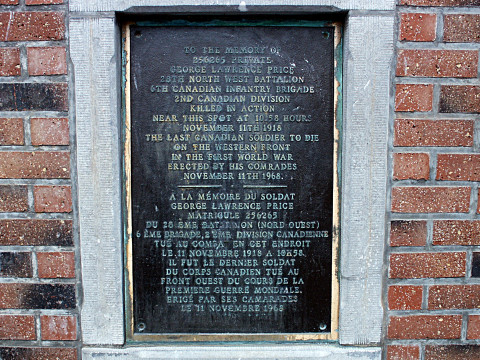 On the 50th Anniversary of his death veterans from the 28th Battalion gathered at the canal side to unveil a plaque to George Price which was placed on the wall of M Stievenart’s home — the first house that they had entered.

Time has passed on and the canal has been widened and the old road bridge replaced. The Stievenart’s house was demolished and for a while the plaque was displayed on the Hôtel de Ville. It has since been returned to its original position attached to a small brick monument (Which it is suggested came from the original house. It would be nice to think that the council had the foresight to retain some of the bricks).

The inscription in both French and English reads :

To the memory of Private George Lawrence Price 256265 of the 28th North West Battalion, 6th Canadian Infantry Brigade, 2nd Canadian Division, killed in action near this spot at 10.58 hours, November 11th, 1918, the last Canadian soldier to die on the Western Front in the First World War. Erected by his comrades, November 11th, 1968.

Just behind it a pedestrian bridge has replaced the previous road bridge but it is still possible to walk across and have a rough idea from looking back as to what Price and his comrades saw and did that fateful morning. 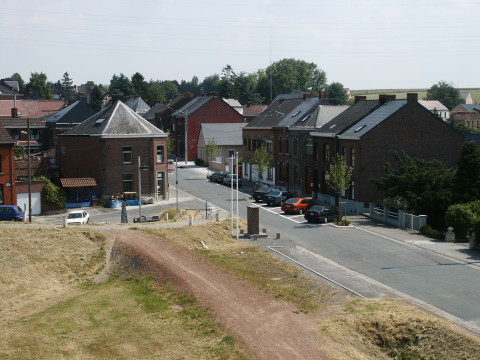 Looking down on the Monument from the bridge