La Capelle is a town about sixty kilometres from Cambrai on the D 1043 towards Hirson. From the main road follow the signs for the Monument de l’‘Armistice – Pierre d’‘Haudroy.

Turn right onto the D 285 and follow it for about one kilometre. The monument is on your right with a parking area to your left. 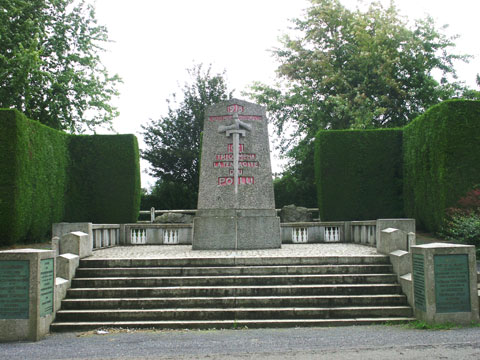 On 8th August 1918 Field Marshal Sir Douglas Haig launched the Battle of Amiens which began a period known as the hundred days during which the German Army, now over extended and in short supply of men and supplies, was steadily pushed back towards the Belgian frontier.

On the right of the British Armies the French retook the Chemin des Dames, scene of their disastrous offensive in 1917, and fighting alongside the American Expeditionary Force, pushed ever northwards.

On 4th November 1918 attempts by the German army to quell a mutiny by the sailors of the High Seas Fleet ended with the soldiers joining the sailors (who were declining the chance to have one last fight to the death with the British Royal Navy).

The German government under Prince Max of Baden had corresponded with President Woodrow Wilson and had asked him to open the way for an armistice.

Certain general conditions had been imposed on Germany and they had been told to nominate their delegation to Maréchal Ferdinand Foch the Commander in Chief on the Western Front.

That done the Germans were given details of where to approach the French lines and the regiment concerned was warned of the delegation’‘s expected arrival.

In the small hours of the morning of 7th November 1918 Matthias Erzberger leading the plenipotentaries arrived at the German OHL (Oberste Heeresleitung—German High Command) in the Belgian town of Spa.

Erzberger was fully aware that the results of any negotiations would be lain at his doorstep and not that of the military. The selected representative of OHL had already withdrawn. Erzberger’‘s thoughts were quite prophetic, because on 26th August 1921 he would be assassinated by fanatics.

The Germans were told to approach Général Debeney’‘s army along the front between Givet – La Capelle — Guise. They had asked for a provisional cease fire but this had been refused apart from the route leading into La Capelle where the French 166e Division d’‘Infanterie had been alerted to their possible arrival.

At noon following the transmission of messages to Maréchal Foch the German deputation set out.\r\n\r\nAt 2020 hours four cars, with full headlights, displaying white flags and carrying a trumpeter sounding the cease fire approached the French lines at this point near the hamlet of Haudroy. It was pouring with rain and a thick mist hung over the ground.

The party was met by the 25 year old Captain Lhuillier, the Commandant of the 1st Battalion of the 171e Régiment d’‘Infanterie.

A Bugler called Pierre Sellier replaced the German trumpeter on the duckboard of the first German car and the convoy set off again through the French lines to the Villa Pâques at La Capelle. From there they were taken on to Compiègne.

Part of Hitler’s rise to power was borne on the idea that it had been the civilian government that had humiliated and betrayed Germany and not the Army, who remained unbeaten on foreign soil at the time of the Armistice.

To mark the location a monument in Vosges granite was erected on 5th November 1925. It was funded by a subscription organised by the 171e Régiment d’‘Infanterie and its reserve regiment the 371e RI.

For the next 23 years until his death in 1948 Pierre Sellier returned to the location to sound the Cease Fire on the anniversary of the Armistice. He has a memorial plaque which was unveiled on 5th November 2006 to the left of the steps.

The monument was deemed offensive to the Germans and was one of the first things they blew up in 1940 – on 14th August. The monument was reconstructed and inaugurated on 14 November 1948, and it is this that you can see today.

The main inscription tells how:

At the base are tablets telling the story of the construction, destruction and replacement of the monument.