Vrigne-Meuse is a village situated between Charleville-Mézières and Sedan on the banks of the Meuse river. Take the A 34 Autoroute and leave at Sortie 6 (Exit). Follow the D 105 south towards Vrigne-Meuse.

As you enter the village turn right onto the Chemin de Mézières and mount the hill. After about 800 metres turn left following the sign. The monument and viewpoint are situated on what was known as the Signal de l’Epine Cote 249 (Hill 249). 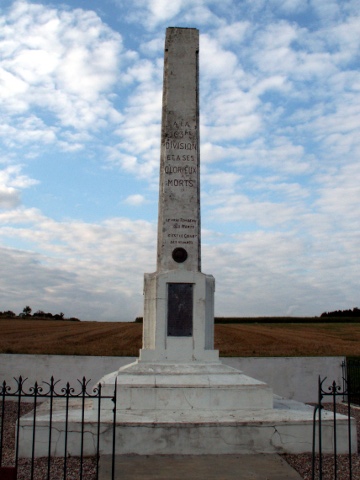 The monument marks the last battle fought by the French Army on the last day of the war. 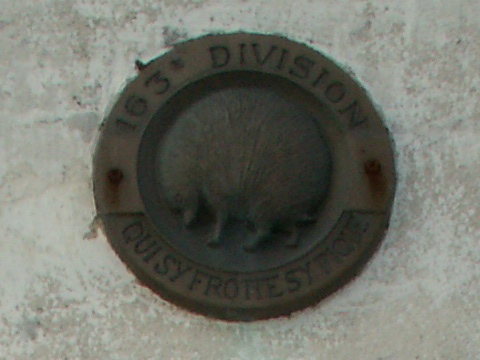 The 163e Division d’Infanterie (DI) was composed of three regiments of three battalions each :

The artillery was provided by the 244e Régiment d’Artillery de Campagne (RAC — Field Artillery) and there were three companies of Genie (Engineers) plus the usual services including the 17th Motor Ambulance from the British Red Cross (Section Sanitaire Automobile No 17).

The 163e DI had spent the last two weeks in constant combat pushing the Germans back from the Champagne area towards the north. On the 8th November they had reached the southern side of the River Meuse and had installed themselves where they could in the villages between Charleville-Mézières and Sedan.

At 2000 hours on the 9th November the Division received orders from the 14e Corps d’Armée advising them that they were to :

Cross the Meuse.
Occupy the village of Vrigne-Meuse.
Operation to be carried out urgently.
Do not await daylight.

For the Corps Headquarters Staff it was a matter of not letting up on the pressure, pushing the Germans to accept Foch’s terms for an Armistice.

Using the cover of the fog the engineers manage to get a footbridge across anchored on the lock and about 0800 hours on the 10th November some 700 men from the 415e RI crossed the river and installed a telephone line to their HQ in the post office at Dom-le-Mesnil.

The regiment was strung out on a three kilometre front between the river and the railway line running parallel to it (east to west). The crossing, carried out in absolute silence, had been a great success but the reality of their position would only truly be known when the fog lifted.

As soon as the fog cleared the Germans opened up with their artillery in an attempt to drive the French back across the river and a number of counter attacks were carried out by the Bavarian Guards and Fusiliers. The 415e RI however managed to hang on with the aid of a box barrage falling around them and so preventing the enemy from getting too close.

In the early hours of the 11th November 1918 word circulated that the Armistice was about to come into effect but the shelling and machine gun fire continued.

At approximately 1050 hours Soldier Augustin Trébuchon a runner in the 9e Compagnie was running towards his Battalion Headquarters with a message about soup being served after the cease-fire when he was hit by a round and killed. He was later officially declared France’s last battle casualty (many more from all armies would later die of their wounds).

At 1100 hours Bugler Octave Delalucque sounded the cease-fire. The war was over.

Officially there were no French casualties on the last day of the war. If you visit the churchyard you will notice that Augustin Trébuchon and his comrades are all noted as having been killed the day before.

The railway line is just behind the house in the foreground. The river just beyond that

The monument pays homage to the entire Division despite the fact that most of the heavy fighting was carried out by the one regiment : 415e RI after whom the main street in the village is named. There are also streets named in honour of Augustin Trébuchon and Octave Delaplanque. 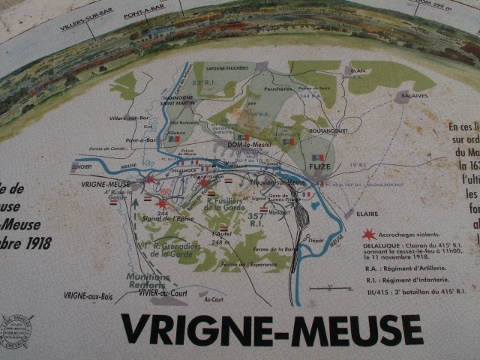 On the upper part of the column can be read the words :

To the 163rd Division and its glorious dead

Followed by a quote from Jean Cocteau

Under it is a small plaque of the Divisional badge : a hedgehog with Louis XII’s motto Qui s’y frotte s’y pique (Whoever rubs me will be pricked).

Throughout all of the 10th November and the following night, and despite numerous counter-attacks by the Bavarian Guards, these fine Regiments reinforced by a battalion of the 19e RI heroically held on to the conquered ground on the right bank until 1100 hours on the 11th November when the buglers sounded the Armistice.

Alongside is a descriptive panel with an annotated panorama. This can at first be confusing because the view is from the German lines looking towards the oncoming French. Once that is understood the unfolding of the engagement is easier to follow with the French crossing the river towards you.

The final moments of the war
La Pierre d’Haudroy