Webmatters : The Monument to the DAN at Mont Kemmel

Mont Kemmel lies just inside the Belgian frontier. It is easily visible alongside the Mont des Cats and is well sign posted as Kemmelberg (Its Dutch name).

Between Ieper and Armentières, Kemmel village lies on the N 331. Coming from Bailleul or Poperinge follow the signs for Loker (Locre) or Klijte. From there, or other villages such as Mesen or Ploegsteert, just follow the signs.

Once in Kemmel village, follow the signs to Kemmelberg and go up the hill.

Note that the road up and over the hill via the belvedere is wooded, steep, narrow and in places cobbled. This is a popular place to find walkers and cyclists ! There are also rides in horse drawn carriages which can slow your ascent. Be wary of children and families on the road.

Just after the Belvedere you will find on your left a small clearing with a parking area. 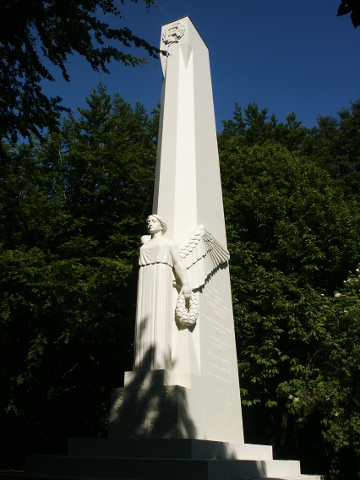 To the south and west of Ieper are a number of high hills, including Mont Kemmel, Mont Noir and the Mont des Cats (Which is in France and identified today by its abbey and massive aerial).

As the changes in locality names took place post-war all the battles in this area take their French names. In Belgium the signs are for Kemmelberg and Zwarteberg, though the latter’s summit (Mont Noir) is in France, the border running, at one point, right up the centre of the main street.

Mont Kemmel from Dranouter, the strategic importance of the hill is quite evident

On 9th April 1918 the Germans had launched Operation Georgette as part of their ongoing Spring Offensive. This is known as the Battle of the Lys (Or sometimes 4th Ypres) and for a week they made startling gains, pushing the British further and further back. Towns that had been in Allied hands for years were now occupied.

By the 16th April the Germans had reached the foot of Mont Kemmel but an attempt to break through the British defences the following day failed in its objective. Both sides were weary but the British in General Sir Herbert Plumer’s Second Army were almost completely out of reserves.

Some of its Divisions had already been involved in the desperate fighting on the Somme in March and a report showed that Divisional effective strengths were for some down to about 5,000 men (a third of what they should have been).

Field Marshal Haig had repeatedly requested that Général Foch (now in overall command of the Allied forces) send fresh French troops to the beleaguered area, but Foch was far from convinced that he was witnessing the Germans last offensive (in which he was proved correct).

However, five French Divisions were sent to the Flanders front and they began taking over the defence of Kemmel Hill on the night of the 17th April. In fairly typical Foch style the defence would be conducted by attacking, so although the defence works that the British had started would be continued, greater energy would be spent in preparing for a counter-attack.

Covering Kemmel village and the hill itself was the 28e Division d’Infanterie. On their left was the 9th (Scottish) Division and on their right covering Dranouter was the 154e DI.

From the top looking out across the plain towards Bailleul

The Germans, having failed to take the hill in a rush, began preparing a set-piece attack. They knew the importance of the hills to the Allies and that they would be resolutely defended. The X Reserve Corps (3 front line Divisions with 2 in reserve) occupied the line between Bailleul and Lindenhoek. The Alpenkorps (actually a Division) and the 4th Bavarian Reserve Division faced Kemmel Hill.

On the right facing Kemmel village and then as far as Saint Eloi (now Sint Elooi) was the XVIII Reserve Corps (4 front line Divisions with 2 in reserve). General von Arnim’s Fourth Army had a further two Divisions in reserve.

In order to regain lost ground and smooth out the front line the 28e DI on the hill prepared a number of local attacks for the night of the 24th April, but the men are wary. There was a lot of noise coming from the German lines and they feared that the Germans have got wind of their movements.

At 2100 hours the French attacked but were stopped dead by the Germans. They tried again but the result was the same. They did not know it but they had been knocking on a door that was about to be opened. The Germans were indeed on the alert but not because they knew of the French plans but because they were about to launch their own offensive. All the French had succeeded in doing was lose precious time. Time that, with hindsight, could have been better used for preparing their defences.

At 0230 hours on the 25th April over 250 batteries of German guns opened up on Allied artillery positions with a mixture of gas and high explosive. For the next two hours they concentrated solely on destroying the gun emplacements.

After a short pause, at 0500 hours the German barrage was switched to the French front line at Mont Kemmel. French soldiers who had survived the horrors of Verdun described it as the worst they had ever encountered.

An hour of furious bombardment was considered sufficient by the Germans and at 0600 hours they launched their infantry to the attack. If the French put up any form of resistance, the attackers flowed around them. It wasn’t before too long that the French trying to contact neighbouring units realised that they were being systematically isolated. Then came the flame-throwers followed by the heavy machine guns and trench mortars.

For the III/99e Régiment d’Infanterie (A French Regiment consisted of three battalions that fought together) on the summit it was clear, within half an hour, they had been surrounded.

By 0710 hours the Reserve-Jäger-Bataillon Nr.10 (Hannover) began clearing up the survivors on Kemmel Hill. By 1030 hours it was all over. The hill which had remained in Allied hands for four years had been taken by a spectacular display of brute force.

Even the German air force had joined in with 96 aircraft dropping 700 bombs and machine gunning the French positions as the Leib Regiment of the Alpenkorps stormed forward.

The fact that the French Ossuary just down the hill from the monument contains the remains of more than 5,000 unidentifiable soldiers, mostly, from fighting in this area in April says more about the fury of the bombardment than mere words.

Although the Germans would press on for a couple of kilometres towards the Scherpenberg and Loker village (Locre) they feared counter-attacks and had been warned not to extend themselves beyond their own artillery. In all probability their troops were exhausted as well but this failure to exploit the rupture in the Allied lines would inevitably lead to their defeat.

Mont Kemmel would remain in German hands until the end of August when the American 27th Division and British 34th Divisions would finally drive them back from the area. A monument to the US Divisions involved in the fighting is only a short drive away at Vierstraat, in the direction of Ieper. 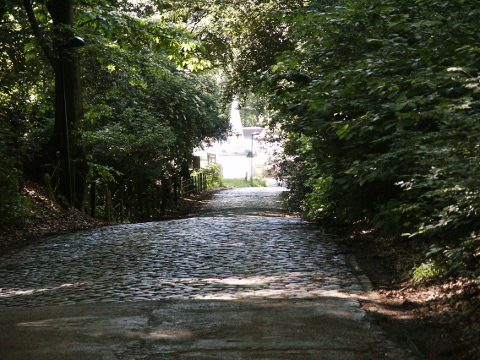 Looking down the slope towards the French Ossuary

Known locally as Den Engel (the angel) this 16 metre high French monument depicts Nike, the Greek goddess of victory (So now you know !) looking out towards the area where the French fought.

The first stone was placed on 4th July 1932 by King Albert I.

The monument was unveiled on 18th September 1932 in the presence of a number of personalities, including France’s Maréchal Pétain and the Belgian Generals Garde and Dubois.

On its sides you can read the names of the major units that formed Général de Mitry’s Détachement d’armée du Nord.