Webmatters : Monument to the 27th and 30th US Divisions at Vierstraat

This monument to both the 27th and 30th Divisions US Army lies just south of Vierstraat between Ieper and Kemmel on the N331.

It is signposted from a number of locations. 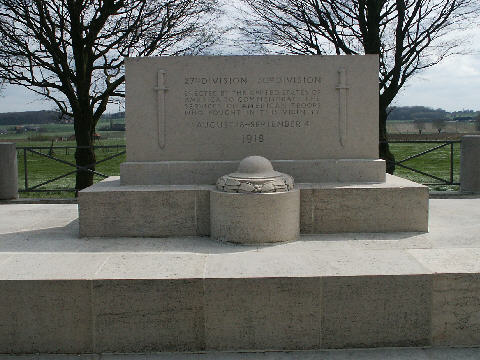 These two Divisions had arrived in Belgium in May 1917.

To acclimatise the American troops into the way of European warfare, their units were usually placed alongside either French or British Divisions from whom they would receive technical assistance and instruction.

In this case they served with the British Army throughout the remainder of the war.

Following the opening of the last great German offensive in the Spring of 1918 Mont Kemmel (Kemmelberg today) had been swiftly taken from the French who had arrived on location only a matter of weeks before.

The area was slowly won back and by 31st August 1918 the Germans had retired from Mont Kemmel and the Americans found themselves in the front line.

The 27th Division advanced on Vierstraat and the following day both Divisions continued the advance towards Voormezele.

In the space of just a few days they suffered 2,100 casualties, some of whom are buried in the only American Cemetery in Belgium; at Flanders Field Cemetery Waregem. 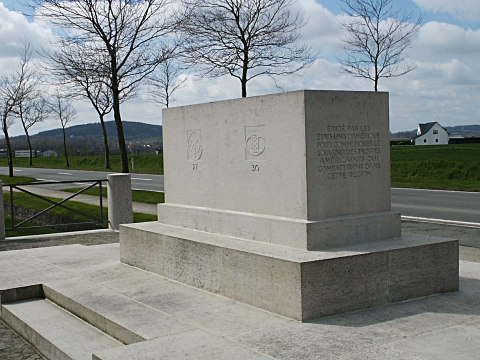 The Divisional Badges and Mont Kemmel

The monument on a low platform consists of a rectangular white stone block, in front of which is carved a soldier’s helmet upon a wreath. It was designed by George Howe of Philadelphia.

There is an explanation and map showing the situation in and around Mont Kemmel. 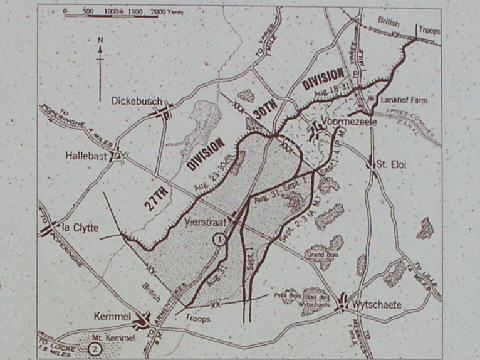