To visit these trenches the first thing that you have to do is visit the Tourist Information Office at Kemmel. This is situated behind the church in Sint-Laurentiusplein.

If you have the time, visit Kemmel Château Cemetery which is a few hundred metres away.

From Kemmel roundabout turn left towards Ieper on the N331. You will pass the Laiterie Cemetery on your left and a short time later the US Monument on your right.

At the crossroads at Vierstraat turn right towards Wijtschate. As you come up the hill you will see woods in front of you and then a signpost cutting back to the left for Bayernwald and also Croonaert Chapel CWGC Cemetery.

Within a few hundred metres there is a small parking area on the left — often filled with coaches. Park here and walk a little further and around to the right (note the panoramic photo at the road junction).

The entrance to the trenches is on your right and you gain access by scanning the barcode on your ticket.

Looking out towards the British Lines
Elzenwalle Château in the woods on the right horizon.

As you can see from the brass relief map just inside the entrance this small wood was near the front line from 1914.

The Allies called it Croonaert Wood but because the occupying soldiers were from the Bavarian Army it soon became known to the Germans as Bayernwald — Bavarian Wood — regardless of who were the actual tenants.

The trenches here are recreations around original bunkers, and the main interest is the fact that Adolf Hitler served here as a runner whilst still a young soldier. It was in this area that he gained his Iron Cross and he returned to visit the wood in June 1940.

The wood was captured by the 19th (Western) Division on the 7th June 1917 on the first day of the Battle of Messines.

The Hollandscheschuur Group of three mines were blown in the dip across the road from the wood.

The area had originally been rediscovered in 1971 by a local teacher, André Becquart, who uncovered the bunkers. However, the site fell into disrepair on his death until it was reopened in 2004.

Although the trenches are recreated the Kemmel Tourist Office and local enthusiasts have followed original German 1915 Trench Maps in their work on the site.

Immediately inside the entrance is a covered area with the relief map and numerous informative panels with some good photos and historical accounts. 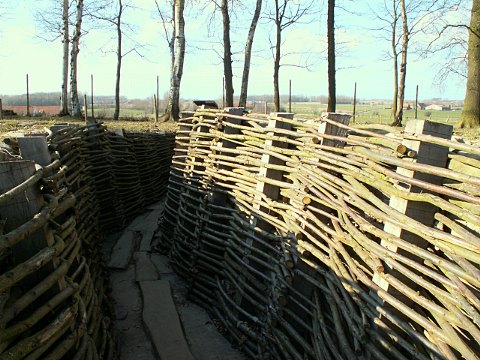 The photos show that the wattle frames along the trenches are authentic from the early years of the war.

The trench system is quite short but can be entered by a number of entrances. Some of it can get a little overgrown, but do not be put off as the bunkers are worth seeing. 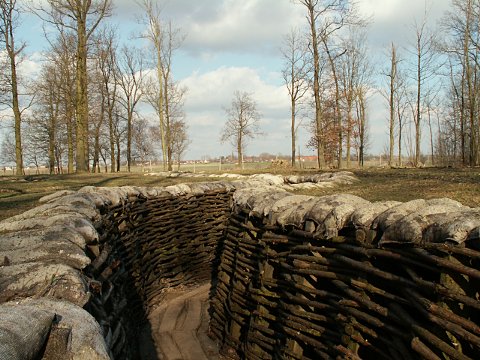 There are four bunkers within the site and the explanatory panels mention how it was necessary to construct those bunkers near the front line with prefabricated blocks. As you went further back poured concrete would have been used. 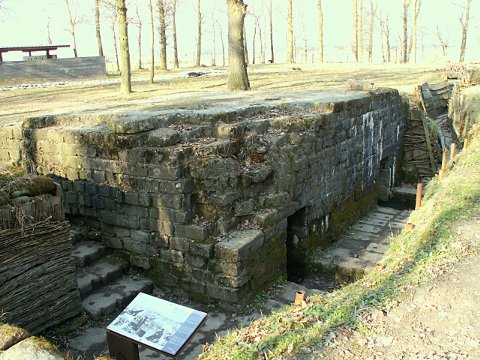 One of the bunkers

It has often been said that one of the differences between Allied and German trench systems was the depth and durability of the German positions. The Germans were here to stay – you move us. The Allies were trying to recover lost territory and thus insisted on the idea that trenches were for a wee while and not forever. If the men got too comfortable, they might forget about recapturing lost ground.

Here at Bayernwald a notice is displayed next to one of the bunkers explaining the interior height was limited to 1.2 metres. 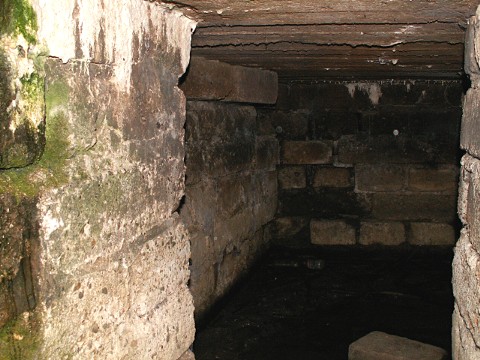 Inside the bunker — crouching space only

The objective was to ensure that although it afforded a good degree of shelter it was by no means comfortable. 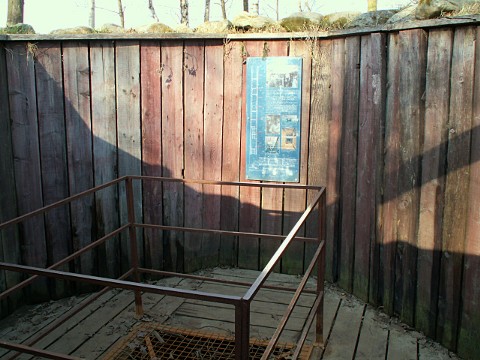 One of the mine shafts

You can also see one of the mine shaft entrances dug to counter British mining activities. This particular one was known as Berta 4 and is 17 metres deep.