Mesen is located on the N365 road between Ieper, Wijtschate, Mesen, Ploegsteert and Armentières.

Coming from Armentières and Ploegsteert drive up the hill past the Irish Peace Park and then turn left into Nieuwzeelanderstraat.

Coming from the Ieper direction you have a sharp right hand turn at the church square, continue round to the left descending the hill and take the second on the right : Nieuwzeelanderstraat.

After about three hundred metres you will see the pedestrian entrance. Immediately afterwards there is a parking area on your left by a garage. As the sign says, you park here at your own risk.

Do not confuse this battlefield memorial with the New Zealand Memorial to their Missing at Messines Ridge British Cemetery, a short drive away. 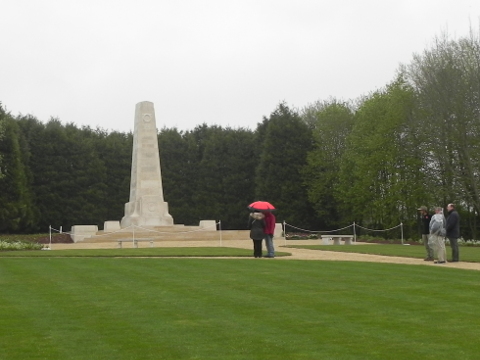 Although situated in West Flanders, Mesen is officially bilingual and was always knows as Messines to the British. It is Belgium’s smallest city and has been twinned with the town of Featherstone in New Zealand since 1975. Featherstone was a training camp during the First World War.

Messines fell into the area of the British Second Army under the command of General Sir Hubert Plumer. From the very moment that the British lost this ridge to the south of Ieper Plumer realised that at some stage it would have to be won back again.

Over 2,000 guns with a third of them heavy or medium batteries, would be brought together. A medium or heavy gun was allocated to every 40 metres of front. 144,000 tons of shells were allotted to the attack. In the preliminary bombardment 3,500,000 rounds would be fired.

However, the characteristic that sets this battle apart from others was the use of over 400 tons of explosives in nineteen mines.

Looking towards Messines. The New Zealand Obelisk is on the left

On the southern end of the attack, 3rd Australian Division under Major General John Monash had a hard time coming up through Ploegsteert Wood whilst undergoing a heavy gas barrage and losing about 500 casualties.

They arrived at the front line just as the mines at Trenches 122 and 127 detonated and found themselves having to go straight into the attack. Opposition was minimal as those Germans encountered, were by and large shocked and bewildered beyond the capacity to resist.

On their left the New Zealand Division made rapid progress up towards Messines village.

The New Zealanders should have had a mine at Petite Douve Ferme on their front, but this was the one mine that had been discovered by the Germans and collapsed (with a camouflet) causing the loss of four men on 27th August 1916. The charge had to be left where it was — and it would appear to be there yet!

The farm is still in the same family and was renamed La Basse Cour after the war.
The mine is under the barn !

The front line trench system was known as Uhlan Trench and in it were a number of concrete blockhauses. Two of them are within confines of the park.

The village of Messines had been completely demolished by the shelling but the Germans had made every use of the cellars and the ruins of both the church and the abbey. These all provided excellent machine gun positions, but ultimately no match for the men from down under and the tanks supporting them.

Dawn had only just risen and after 150 minutes of fighting Messines and the trenches on the eastern crest of the hill were in Allied hands.

One tragedy for the 1st New Zealand Brigade was the loss of their commanding officer Brigadier General Brown who was killed by shellfire near to where the monument stands. He is buried in the Communal Cemetery Extension at Bailleul. 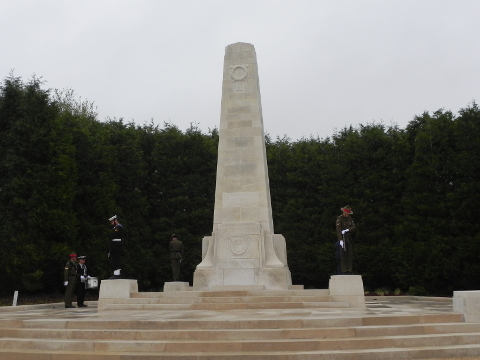 The obelisk is similar in style to other New Zealand memorials including the one at ‘s Graventafel.

It takes the form of a column on a raised stepped base. At the base of each side there is a panel.

In honour of the men of the New Zealand Division.
The battle of Messines 7th to 14th of June 1917

Underneath this is a design of a Maori carving surrounding the words New Zealand and a fern-leaf. Beneath that is the phrase From the uttermost ends of the earth.

The sides carry (in English, Flemish and French) the story of the day.

The New Zealand division on the 7th of June captured this ridge and advanced 2000 yards through Messines to their objective on the eastern side.

The memorial was unveiled on 1st August 1924 in the presence of King Albert I and Sir Alexander Russell, former commander of the New Zealand Division. 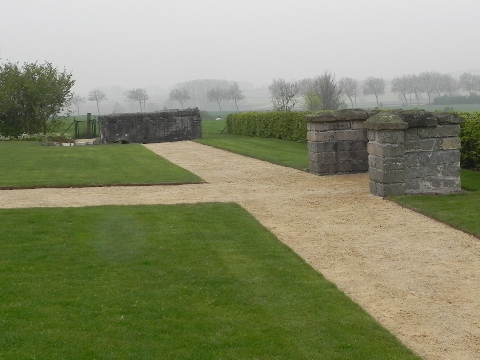 As you enter the park you will see two bunkers on your right. These were in Uhlan Trench, captured by the New Zealand Division on 7th June 1917.

The two bunkers are opposite the monument on your right as you enter the park.

With your back to Mesen village you can look out across the valley and the approach route made by II ANZAC.

Within the village at the Messines Ridge Cemetery you will also find the New Zealand Memorial to their Missing.

The City of Mesen has a number of interesting sites including a museum and the church/crypt. A new addition in 2014 was Sergeant Kiwi as he is known locally a new statue on the city square.