During the war, the ridge and village were spelt Gravenstafel — it should be noted that the current Flemish spelling is: ‘s Graventafel. Likewise, the ultimate objective of the 3rd Battle of Ypres is now sign posted: Passendale.

The best way to approach the monument is probably from Dochy Farm New British Cemetery (signposted from Zonnebeke) which is on the same road as the car park of the Canadian Memorial at Vancouver Corner.

From Ieper take the N 37 towards Zonnebeke. Just after the entrance to the Memorial Museum turn left at he roundabout which will bring you to Dochy Farm Cemetery.

Having taken in the view of what faced the New Zealanders continue along the road towards the Canadian Monument and at the next junction turn right into Roeselarestraat.

The monument is at the top of the hill. Continuing on will take you into Passendale from where you can visit Tyne Cot Cemetery and the New Zealand Memorial to the Missing.

If you wish to visit the Canadian Memorial turn left at the monument into Schipstraat which then becomes OL Vrouwstraat.

This is the area in which the gas attack against the Canadians took place and you will find an explanatory memorial plaque to the 48th Highlanders of Canada on your right as you travel the ridge. This road will bring you out close to Vancouver Corner which will be on your right at the junction — Dochy Farm is back down the road on your left. 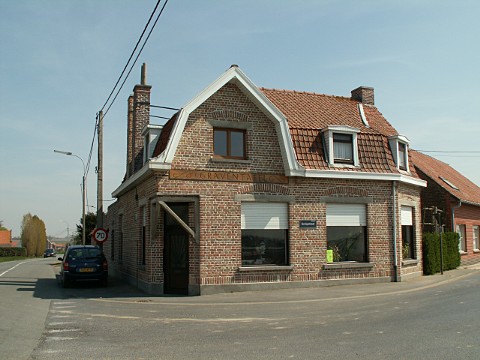 The village of ‘s Graventafel

On the 4th October 1917 as part of what is generally called the 3rd Battle of Ypres (Passchendaele) the battle of Broodseinde was fought.

The New Zealand Division of II ANZAC Corps was to be heavily involved in this attempt to take the village of Gravenstafel and a spur to its right nicknamed the Abraham Heights by the Canadians in 1915. The 1st and 4th Brigades of the Division formed the front line of the assault with the 4th on the right. To their right was the 3rd Australian Division.

The Commander of the British Second Army, General Sir Herbert Plumer, was an advocate of small advances which would then be consolidated before moving on. A system of bite and hold. For this reason the objectives were quite meagre when compared with the grand sweep intended on the first day of the Somme.

A good view can be had from Dochy Farm New British Cemetery.

Dochy Farm and the Tyne Cot Cemetery on the right of the horizon.
Behind and to the left of Dochy Farm is a white obelisk.
This is the New Zealand Memorial at ‘s Graventafel
The New Zealanders’ attack in the battle of Broodseinde on 4 October 1917 crossed this area

Looked at today it is hard to comprehend how these slight rises in the ground were so important strategically. Yet because the land is by and large so flat every bump in the terrain took on enormous significance.

By this stage in the war the German system of defence was far more elastic than it had been a year earlier on the Somme. There the British Army had been flung against an entrenched and heavily defended system.

The Germans had replaced this with a system of mutually supporting bunkers and pill boxes with interlacing but lightly held trench systems. The intention was to suck the enemy in and attack them from all sides.

Many of these pill boxes have survived until today. They were invulnerable to all but a direct hit from very heavy artillery — something the British did not have large numbers of.

Nevertheless, things had also changed on the Allied side and the artillery barrage that went down that morning prior to the attack was no longer a simple rolling line of shells, but a mixture of static bombardments and creeping barrages.

In a twist of fate, just prior to the allies advance the Germans put down a barrage in preparation for one of their own attacks. This caused numerous casualties but they in turn were equally badly mauled as the British bombardment began on their forward lines.

The terrain in October was heavy going, the streams and drainage systems that should have been carrying the rain away had long been pulverised into nothingness.

Today, the very word Passendale conjures up a vision of life sucking mud and horror. Fortunately the weather had been kind for the previous few weeks, but there was pressure on the commanders to make significant headway before the autumn settled in properly.

Despite the heaviness of the ground the New Zealanders made excellent progress and by the end of the day they had succeeded in taking all of their objectives. 3rd Otago took the village of Gravenstafel and captured a number of German prisoners.

The Division now pushed on up the road towards their final objective: the Bellevue Spur on the main road and on the southern edge of the Passchendaele Ridge itself. Evidence of the intended German attack manifested itself in the number of German dead in the trenches — caught by the sudden counter bombardment.

General Plumer’s system of bite and hold seemed to be working. By the end of the day the Division had taken 1500 Germans prisoner and taken all of their objectives.

That night the feared autumn rain began. In just over a week’s time New Zealand would suffer its greatest number of casualties in a single day, as good planning turned to bad. On 12th October, 846 New Zealanders were killed within a few hours, about 2,000 more were injured or missing. 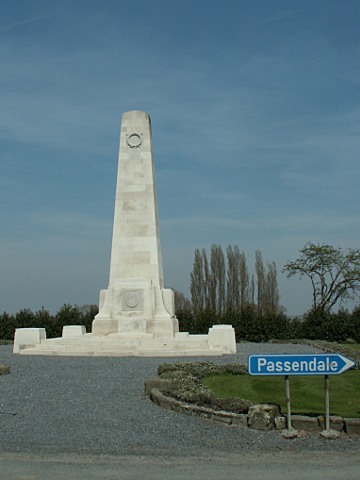 The obelisk is similar in style to other New Zealand memorials including the one at Mesen (Messines).

It takes the form of a column on a raised stepped base. At the base of each side there is a panel.

Underneath this is a design of a Maori carving surrounding the words New Zealand and a fern-leaf.

The sides carry (in English, French and Flemish) the story of the day.

This monument marks the site of Gravenstafel which on October the 4th 1917 was captured by the New Zealand Division as part of the general advance towards Passchendaele.

The memorial was unveiled on Friday 1st August 1924 in the presence of the High Commissioner for New Zealand Sir James Allen and Major-General Alexander Russell former commander of the New Zealand Division.