The memorial is easily be reached by taking the main road from Ieper to Brugge (N 313). Just after passing through Sint Juliaan you will come to a large crossroads.

Turn right and immediately in front of you is the memorial car park. 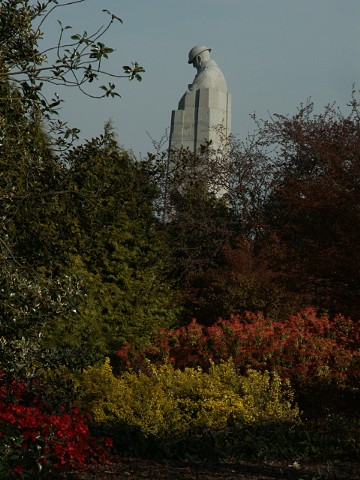 There are only two major Canadian Memorials on the Western Front that at Vimy Ridge in France and this one in Sint Juliaan (St Julien) to the north of Ieper.

For the battles I have used the old form of Ypres but when referring to the town itself I have stuck to the Flemish version of Ieper as that is invariably the form you will see on road signs and general tourist information. 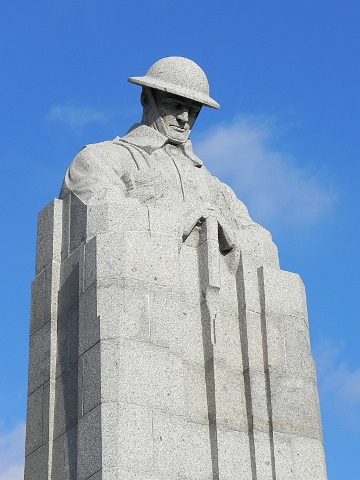 Ypres had been desperately fought over in October and November 1914 during the race for the sea. Once trench warfare became the way of life on the western front each side endeavoured to find some way to break through.

This bombardment was followed by a massive discharge of chlorine gas. A green mist that gently floated on a light breeze into the French Lines.

The gas attacked the lungs of the soldiers and soon they were choking – literally drowning as their lungs filled with fluid. The French Line collapsed leaving the Canadians to their right badly exposed.

The breach in the Allied line was far greater than the Germans had been expecting and they were not able to fully exploit it.

Canadian and British troops were flung into the gap to prevent a total collapse and the loss of Ypres.

The German pressure started to mount again and on 24th April they launched another gas attack this time against the Canadian troops defending St Julien (Sint Juliaan). Gas masks had yet to be invented and the soldiers had to fight with soaked handkerchiefs as their only protection.

The Canadians managed to hold on until they were relieved, but ultimately they and the British were forced back closer to Ypres.

In their first major engagement of the war the Canadians suffered 6,035 casualties. As the memorial points out 2,000 of them lie in the cemeteries nearby.

Gas masks were introduced, but the men still only had moments to fit them properly before they would be overcome.

One of Wilfred Owen’s most evocative poems puts us there in the trench as we fit :

…the clumsy helmets just in time.

In all my dreams, before my helpless sight,
He plunges at me, guttering, choking, drowning.

Despite the protestations of barbarity — German observers were quite correct when they replied that it would not be long before the British and French replied in kind. In the case of the British at Loos in September 1915.

With the prevailing winds generally in their favour on the Western Front the British would make full use of a weapon now deemed: normal.

The Brooding Soldier surmounts an almost eleven metre high column of granite — his head bowed a Canadian soldier stands with his hands face down resting on arms reversed.

The statue is set in the middle of a garden surrounded by tall cedars, which are formed in the shape of cones to match and complement the statue.

The designer of the monument was a Regina architect, Frederick Clemesha, who was wounded while serving with the Canadian Corps during the war. The stone for the shaft was cut in quarries of the Vosges and the surmounting bust was carved in Brussels.

The Memorial was unveiled on 8th July 1923, by HRH the Duke of Connaught (Canada’s Governor General).

The Canadians paid heavily for their sacrifice and the corner of earth on which this Memorial of gratitude and piety rises has been bathed in their blood. They wrote here the first page in that Book of Glory which is the history of their participation in the war.

The inscription on the Memorial recalls the Canadian participation in the Second Battle of Ypres:

This column marks the battlefield where 18,000 Canadians on the British left withstood the first German gas attacks the 22nd-24th of april 1915. 2,000 fell and here lie buried.

The plaque suggests that those who died are buried on the site, that is not the case. Many have no known grave and are commemorated on the Menin Gate Memorial in Ieper. 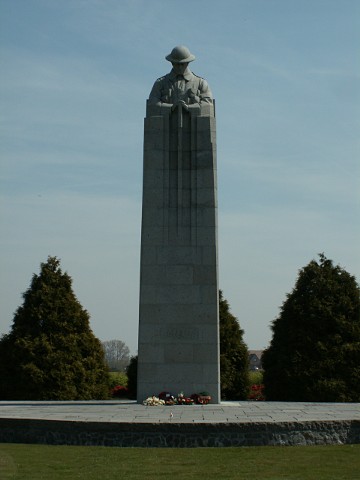