The monument to the stand by the PPCLI is situated on the ground where they fought on the Frezenberg Ridge.

Coming from Ieper take the main road towards Bellewaarde and Menen (N8).

Just after the Hooge Museum and Bellewaarde attraction park you will come to what was known as Clapham Junction with two memorials.

On the right is that to the 18th Division and opposite that to the Gloucestershire Regiment.

Look to your left and you will see a CWGC panel sign directing you left towards the PPCLI Monument. You then turn left again into Frezenbergstraat.

Continue straight on into the village of Westhoek. Here you will turn left into a narrow road aptly named: Princess Patriciastraat.

Taking care along this windy road you will come to the monument on your left. It is a round seat so take care you do not drive past it.

If on leaving you continue straight on you will eventually come out alongside RE Grave Cemetery and the Ieper-Zonnebeke Road (N37). 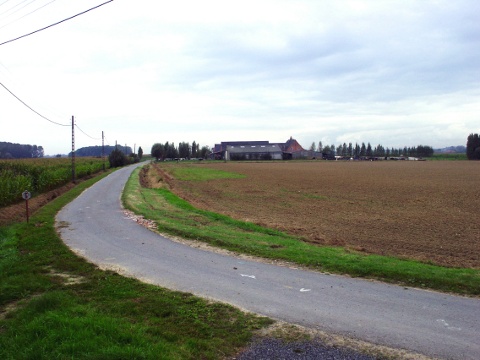 The Regiment was born in Ottawa in August 1914 as a result of the offer of Captain Andrew Hamilton Gault to provide Cdn$100,000 to finance and equip a Battalion for overseas service.

Authority was formally granted on the 10th August by the Canadian Government and on the next day mobilisation began. Eight days later, it was completed, as old soldiers flocked from every part of Canada. Out of 1,098 all ranks accepted into the new Regiment, 1,049 had seen previous service in South Africa or in the regular forces of the British Empire. In addition to personnel from the Royal Navy and Marines, almost every unit in the British Army had its representation. 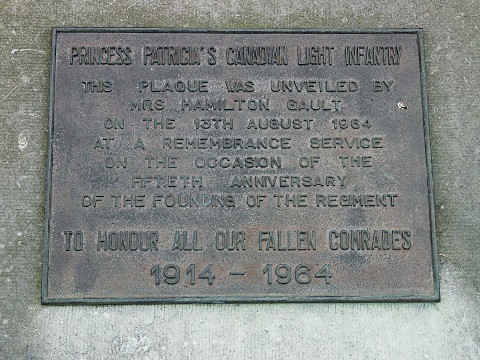 Lt Colonel Francis Farquhar DSO, of the Coldstream Guards was selected to command the new battalion and it was he who suggested that the Regiment bear the name of the Governor General’s youngest daughter, HRH Princess Patricia of Connaught. The princess consented and embroidered a flag for the regiment to carry. The Light Infantry suffix came about because Captain Gault, a veteran of the South African War, liked the Irregular feel it gave the regiment.

The 2nd Battle of Ypres had opened on 22nd April 1915 with the first ever massive gas attack. The final big push came on the 8th May when three German Corps assaulted the areas of Mouse Trap Farm, Frezenberg and Bellewaerde.

Outnumbering the defenders by three to one the German’s third assault on the Frezenberg Ridge proved decisive and a hole was punched into the 28th Division’s line.

To the south and on the extreme left of the neighbouring 27th Division the PPCLI were holding a key position supported by the 4th Bn King’s Royal Rifle Corps.

The blanket of fire put down on their positions was so intense that the Canadians’ front line was dreadfully battered. Casualties were so extreme that Major Hamilton Gault was forced to call up the cooks and batmen to man the line. Two of their machine guns were out of action and although their steadiness met the German assault at 0900 hours with accurate fire, the right of the line began to give.

Falling back to the crest of the ridge the Canadians, with a company of the 4th Rifle Brigade, withstood everything that the Germans threw at them for the rest of the day. No further ground was given.

Aid was not long in arriving and a few kilometres to their north a gallant stand by the 2nd Bn Northumberland Fusiliers near Mouse Trap Farm stopped any further encroachment into the northern sector of the line.

For the next few days the remnants of the PPCLI and 4th KRRC held the line. 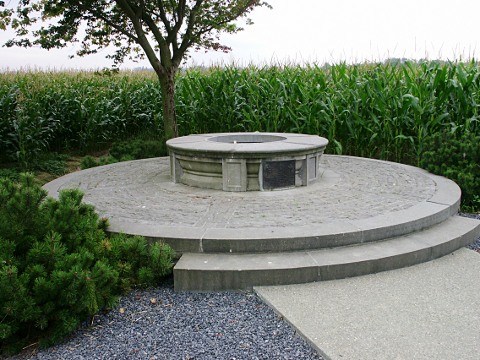 The memorial was unveiled in 1958 by Mrs Hamilton Gault the widow of the Battalion’s founder.

Their memorial takes the form of a memorial seat of Belgium Blue Granite with bronze inscription panels fastened to its backrest. 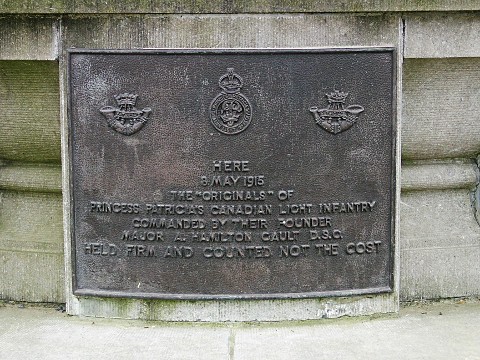 Plaque to the ‘Originals’

An inscription on the base of the memorial states:

Here 8th May 1915, the Originals of Princess Patricia’s Canadian Light Infantry commanded by their founder Major A Hamilton Gault held firm and counted not the cost.

That cost was almost 400 casualties — the battalion being reduced to just 4 officers and 150 men.

The Battalion lost both Lt Colonel Farquhar and his successor, Lt Colonel Buller in the salient. They are buried side by side at Voormezeele Enclosure No 3 in a block made up almost entirely of soldiers from the battalion.

Voormezeele Enclosure No 3
The Canadian Memorial
2nd Battle of Ypres