Whilst the Royal Irish Fusiliers spent all the 24th April on the march, the quiet of the 23rd had changed dramatically into another all out offensive by the Germans — again using gas.

The danger point for the Canadians was the top left corner of the old front line. During the night the 13th Canadians supported by a company of 2nd Buffs had withdrawn slightly in order to offer a bevelled edge between the 15th Battalion on their right and the 7th Battalion near Keerselare (Where you will find the Canadian monument).

The situation at the apex was precarious because, forming the two sides of a triangle, they could be attacked and squeezed from both sides simultaneously. The remainder of the old front line was held (from west to east) by the 15th, 8th and 5th battalions.

From the 13th Battalion downwards the newly formed left flank which had been cobbled together over the previous twenty-four hours was made up of eight battalions who were opposed by three times their number.

At 0400 hours a ten minute bombardment commenced against the Canadian 15th and 8th Battalions accompanied by a release of chlorine gas across the junction of the two units.

Fortunately for the Canadians the preceding day’s comparative lull had allowed Allied scientists to identify the gas and examine captured German masks.

Many of the Canadians had been advised — correctly — that even a dampened handkerchief held over the face would offer basic protection and help alleviate some of the noxious effects, but only for a short period of exposure.

The gas enveloped a much shorter front than the previous attack (a kilometre as opposed to seven) but it was directed at the junction of the two battalions. The 8th Battalion in the 2nd Canadian Brigade had the advantage of supporting fire whereas the 3rd Brigade’s artillery had been retired out of range and found itself unable to help the 15th Battalion.

With the aid of their supporting artillery the left hand companies of the 8th Battalion managed to halt the Germans but the right hand company of the 15th Battalion finding itself severely gassed and sorely pressed by the German infantry and artillery gave way.

The apex of the Canadian front line (13th Battalion and a Company of 2nd Buffs) was held, but by 0630 hours, with the 15th Battalion having been forced back, the Germans were seeping in behind them.

At 0830 hours they were ordered to fall back in front of St Juliaan (St Julien) along the Gravenstafel ridge.

The three left hand companies fell back in good order but only a few dozen from the exposed right hand company made it to safety. Holding the tip of the line, the soldiers of the Buffs never received the orders to retire and were cut off and forced to surrender.

No retirement could have been more orderly or harder fought, but the enemy was using his field gun fire direct, and the men of the 48th [48th Highlanders of Canada = 15th Battalion], the Royal Highlanders [13th Battalion], the Buffs and the 7th were literally blown out of position after position.

The line that the Canadians were falling back to is the road that runs between the windmill at the back of the Canadian Monument and the 1917 New Zealand Monument at the top of the ridge.

Along this road was an area known as Locality C which saw a great deal of heavy fighting. Near to that position you will find a memorial plaque to the 15th Battalion CEF (48th Highlanders of Canada) whose casualties over the period of the 22nd-24th came to 647 — the highest of any Canadian unit during the attack.

The fight for the left flank

Although they had not used gas against the west facing flank of the Canadians it had been severely pounded throughout the morning by artillery and numerous attempts had been made to force the line. By mid-morning the situation at St Juliaan was becoming delicate.

At 1100 hours the commanders of the retiring northern flank units decided to pull back again to a less exposed position. This position proved to be as untenable as the last and a second meeting at 1230 hours pulled the units back to the Wieltje Gravenstafel Road, exposing the right flank of the garrison in St Juliaan.

Near Keerselare Lieutenant Edward Bellew the machine gun officer of the 7th Canadians stayed with his gun, firing until he ran out of ammunition. Cut off from his battalion and wounded, he fought on with fixed bayonet until overpowered. In 1919 on being released from his POW Camp he discovered that he had become the first Canadian Officer of the CEF to be awarded the Victoria Cross. 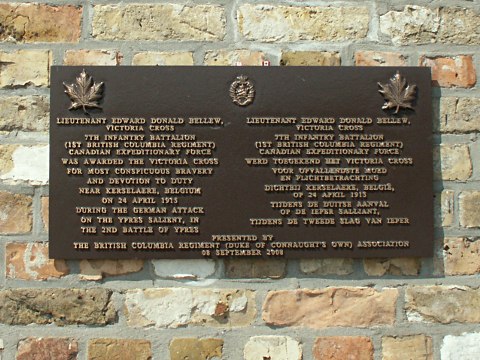 The memorial plaque to Edward Bellew VC on the wall of the café opposite the Canadian Memorial at Vancouver Corner.

The Canadian Memorial at Vancouver Corner

For hours all the available British and Canadian artillery had been directed in support of the retiring Canadians.

Ammunition rationing and all thoughts of trying to conserve shells were forgotten about as the ammunition trains worked themselves to exhaustion trying to replenish the guns.

The quota for field guns was easily exceeded and the 7th Battery of the Canadian Field Artillery recorded that over the first five days of the battle each of their guns fired on average; not the allotted 3 rounds a day but 250.

The Germans now launched another attack and this time against St Juliaan. Despite much bravery by the little garrison of men from the 14th and 15th Battalions by 1500 hours the village was in German hands.

There was now some confusion in the Canadian camp as to what holding the line actually meant. Brigadier General Turner understood it to mean; the reserve system of defences known as the GHQ line, and thus ordered a withdrawal to these secondary positions along the St Jan-Poelkapelle Road.

This was not communicated to the advancing British units of the 150th Brigade and by happy coincidence as the Germans attempted to advance to the south, out of St Juliaan, they ran headlong into two British battalions being brought up in reserve.

Assessing the situation rapidly the 4th Bn Green Howards and 4th Bn East Yorkshire Regiment launched themselves in a furious counter attack against the Germans forcing them back. (This is a phenomenon that the Allies would face for years. Getting into the village was one thing, getting out the far side was another, as you left the shelter of the buildings.)

For the moment it could be said that the lines had more or less stabilised but the Canadians had been sorely tried and although reinforcements were arriving the British Commander in Chief Sir John French could only hope that it would not yet be necessary to retire the 28th Division (on the Canadians right).

The attack by 10th Brigade

In the early evening of the 24th April, Brigadier General Hull commanding the 10th Brigade (which was still on its way to the front line) was given command of a further ten battalions in addition to his own five and ordered to retake St Juliaan.

What the fog of war had not revealed was the fact that at midnight St Juliaan had not yet actually been occupied by the Germans. The surrounding Canadian and British units could have walked in.

At 0300 hours General Hull moved his Headquarters up to Mouse Trap Farm, south of St Juliaan (near the present day Buffs Road Cemetery) but in the pouring rain and the confusion of roads blocked with wounded, units withdrawing into new positions and transport wagons, he could not get in touch with anybody other than his own battalion commanders.

By this time the Germans had taken possession of St Juliaan and were fortifying it at their leisure.

The original plan of attack had been for a commencement at 0330 hours, but it soon became quite obvious that it was not going to be possible to coordinate such an attack within such a short time frame. The attack was postponed until 0530 hours.

Unfortunately nobody told the artillery that the attack was delayed and the covering bombardment went off as prearranged. St Juliaan was deliberately left out of the bombardment because in all the confusion the gunners thought that the Canadians still held it.

At dawn the 1st Battalion Royal Irish Fusiliers left Wieltje advancing on Fortuin just to the south east of St Juliaan. Then at 0600 hours having reached the Hanebeek and their start line the battalion spread out into formation with the Royal Dublin Fusiliers on their left.

The attack was launched and as the Official History recalls:

They were now called on to attempt the impossible.

The men advanced into the morning mist immediately coming under heavy fire.

Thirty minutes later it was all over. The brigade had been brought to a halt just short of St Juliaan by machine gun fire which had been particularly murderous. The men had been tired after their forced march, the attack had been carried out over open ground without proper artillery support, and the final straw was, when it did open up again, the British bombardment shelled its own troops.

The 1st Bn Royal Irish Fusiliers lost 48 men killed and 167 wounded with a further 150 soldiers missing most of whom were in fact dead.

Amongst the dead was Private Morrow who would never know that he had been awarded the Victoria Cross just a fortnight before. He is buried in the White House Cemetery alongside over a thousand other soldiers.

A Regular Army Brigade, the 10th lost nearly 2,500 trained and experienced soldiers either killed or wounded. Losses that a small professional army could not afford.

As General Hull had started his attack a German assault on the 28th Division on the right of the Canadian Division was for the most part repulsed but they did take Gravenstafel pushing the old British front line back to just behind the village.

The attack by the 10th Brigade had however one unexpected outcome.

The German Commander, Duke Albrecht of Württemberg had given up on trying to force the Canal at Steenstraat. Whilst the French and Belgians were not making much progress in recovering lost ground (despite the arrival of numerous reserves) the Germans were not able to advance either.

The Duke had therefore decided to impose his will on the Ypres Salient. Instead, however, of being able to concentrate his energies on both sides of the Canadian position, his forces on the western flank spent themselves in meeting General Hull’s attack.