The Second Battle of Ypres

The First battle of Ypres at the end of 1914 had resulted in a static line of trenches stretching from the Belgian coast down through France to the Swiss frontier. 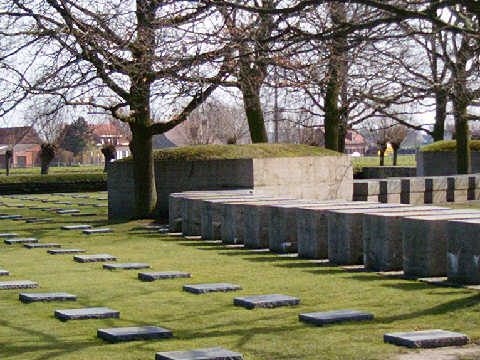 The German Military Cemetery at Langemark

For four years the two antagonists would attempt to break their opponent’s line, rupture their defence system and allow a rolling up victory via the flanks.

The 1st Battle of Ypres had been exhausting for both sides and the Germans had lost considerable numbers of well trained and seasoned troops. They were still a considerable force to contend with, but for the moment they had learnt (like the French) that parade ground advances against defensive positions resulted in untold casualty lists.

For their part, the Allies were looking in 1915 at possible offensives in the area around Arras to the south.

On 25th January 1915 General von Deimling the commander of the German XV Corps was summoned to GHQ and informed that his area of command had been chosen for an attack using gas.

In fact both French and Germans had already resorted to using tear gas grenades or shells but they had all gone unmarked. This attack was going to be different it was going to be a large scale lethal attack.

A basic introduction to gas warfare

Whilst such a move was almost certainly contrary to the conventions of war (No matter how they tried to word and reason their argument), honour and integrity were somewhat subsumed by the possibility of winning the war in one single but terrible blow. This in the long run would actually save lives.

No doubt similar conversations were held prior to the attack on Hiroshima.

The gas was chlorine and was contained in cylinders which had to be placed in predetermined areas, linked by a simple pipe arrangement with a funnel pointing towards the enemy lines. Some 6,000 cylinders were placed at various points along the line between Zillebeke and Steenstraat.

If the German soldiers were to have any doubts about how lethal the gas could be (They argued that it was an irritant and not actually deadly) they were soon put right by a couple of accidents when some of the cylinders were punctured by shrapnel, injuring all the soldiers close by and killing four of them.

The German infantry became very wary of their new super weapon even after they had been issued with primitive gas masks which were little more than soaked cloth placed over the mouth and nose.

By the middle of March the cylinders were all in place. All they needed now was a wind in the right direction and just strong enough to push the gas without actually breaking it up.

As modern maps show the Flemish spellings I have used these rather than the older variants.

At the beginning of April the Ieper sector had become reasonably peaceful. The Belgians had flooded part of the polders and now controlled the Allied front line from the coast down, almost as far as Boezinge to a hamlet called Steenstraat.

They were aided by a French contingent at Nieuwpoort on the coast. As the extreme left of 800 kilometres of trenches this was a vital strategic position. The French Groupement d’Elverdinghe took over the line which ran from Steenstraat on the canal, north eastwards towards Langemark and then eastwards to just behind Poelkapelle.

At Poelkapelle the line was handed over to the British who had the Canadian Division on their left next to the French, followed by the 28th Division and then the 27th Division taking the front line round as far as Hooge on the Menen Road.

The 45e DI were made up of French Colonial units from North Africa whilst the 87e DIT was made up of soldiers who were reaching the end of their conscripted service.

An explanation of French Conscription

A shallow collection of holes

Trenches had been dug, but these were not the formidable systems of 1916 that we think of when the phrase Trench System is used. The water table in Flanders is very high and this prohibited anything other than shallow trenches which then had to be reinforced upwards by means of sand bags and emplacements.

In places the French front line was nothing but a series of discontinuous sections of shallow trenches.

When the Canadians took over their section of the line (From the French at the beginning of April) they found, according to the Official History that:

They consisted of isolated groups of shallow fire and support trenches, with parapets in some cases only four feet thick at the base, and not bullet proof; they had good machine gun posts, but few traverses, no parados, and only flimsy built dug outs which afforded little more than shelter from the weather.

When one of the 45e DI’s Tirailleur Officers arrived on the evening of 21st April to take over his section of the line on the Canadian left he described it as a cemetery. They couldn’t dig down even if they wanted to because of the water level, and there were bodies everywhere still unburied from the winter battles. The more used a footpath was, the more likely it was to suddenly reveal a red trousered or feldgrau coated body.

The French army had gone to war in 1914 in their famous red trousers which were totally unsuited to modern warfare. Soldiers soon began replacing them or covering them up.

Long before they became known as the Poilus the French soldier was known as a pantalon rouge. Ironically the German chemical industry provided the garance coloured dye forcing the French to adopt something else : Horizon Blue.

Trying to improve the system had proved difficult to their predecessors, as the slightest movement during the day was likely to bring down the wrath of the German artillery, wrecking what little trench system they had.

Canadians and French then, were both agreed they had been left deep ditches rather than a defensive position.

It was all to do.

For this reason the French had also built up a second line of trenches further back known as the GHQ Line. These were also separated by gaps but were more solidly built than the front line.

To bolster their position the French had been relying on their forward placed and rapid firing 75mm cannon batteries just to the east of the village of Pilkem. The front line would be held relatively lightly, if the enemy broke through, there were reserves in place and the renowned soixante-quinze field guns would demolish the incursion.

Later in the war this would become known as defence in depth.