The British commander in the sector was General Sir Horace Smith-Dorrien and he was aware by 2000 hours on 22nd April that something cataclysmic had happened to the French and that a serious threat was now posed to his left flank.

Orders were immediately sent out to the 1st Canadian Brigade who were in reserve to come up to the line.

Other units from the 27th and 28th Divisions (holding the eastern flank of the salient) were also ordered to move towards the gap that had been created between St Juliaan and Wieltje. Time was of the essence and soldiers can only walk so fast.

If the Germans launched a further determined assault Ieper would probably have to be given up.

Now that they had retreated to the canal bank, the French were faced with the problem of moving reinforcements to the eastern bank.

With the Germans controlling the canal around Steenstraat the only place that they could get across was at Boezinge and it was by pontoon bridges that the II and III/7e Zouaves were moved across to join their 1st Battalion in the area around (What the British called) Lancashire Farm.

The French were momentarily short on supporting artillery, having lost 51 pieces of their field artillery in the gas cloud, and the Zouaves’ first attempt at 0230 hours to force the Germans back was stopped in its tracks by hedges of barbed wire and machine gun fire.

It has long since disappeared and can now only be located by a commemorative plaque, but at the time to the west of St Juliaan was a large and important wood known locally as the Bois de Cuisiniers. This was translated by the British into Kitchener’s Wood. In theory then the wood’s name had nothing to do with Field Marshal Lord Kitchener. 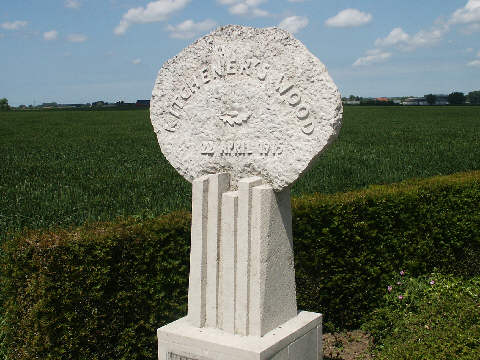 The importance of the wood lay in the fact that it was situated on the slope of the hill overlooking the Allied lines (or rather gaps). With free and easy access via the rear of the wood, control of it would give the Germans an enormous advantage.

Whilst the Zouaves were preparing their own attack the Canadians launched a hurriedly prepared assault on Kitchener’s Wood at midnight.

It was carried out by the Canadian 10th and 16th battalions and they stormed straight through to the far side and dug in. However the problem with all woods is that they are a large, clearly visible and attractive target for artillery. As soon as they knew that it was completely held by the Canadians the German artillery put down a bombardment which reduced the two battalions to the fighting strength of less than one.

Nothing had been heard from the French and efforts by a supporting unit, the Canadian 2nd Battalion, to reach their compatriots met with such a withering fire that they risked being annihilated if they continued.

The wood for the moment had to be given up and the Canadians retired to its southern edge at 0400 hours. Rifle fire that had been heard to the west was the only indication that the French were still there.

With ten assorted battalions drawn from all available sources patching up the British left flank as best as they could, the Allies at dawn on the 23rd could only wait to see what the day and the Germans would bring them.