When the railway was cut through the area a number of spoil heaps were formed. One of these became known on the British maps as Hill 60 (as it was marked by a 60m contour line). On the far side of the railway line was another artificial mound which, because of its shape, was known as the Caterpillar.

The Germans had taken both the Caterpillar and Hill 60 from the French on the 10th December 1914. When the British took over the line in February of the following year they discovered that the Germans on the top of the mound had a superb view of everything all the way to Ieper.

This is very flat ground, so even the slightest bump in the terrain gave the occupying party an enormous advantage. Unfortunately for the Allies the Germans held most of the bumps around Ieper.

The Cloth Hall of Ieper easily visible in the distance

The argument for taking the hill

The problem with trying to capture Hill 60 was the fact that it was overlooked by the Caterpillar on the far side of the tracks. The railway cutting running between the two is very deep and the possibility of taking and holding both mounds was therefore not considered achievable.

Holding Hill 60 on its own without the Caterpillar would also pose problems. The argument has been made that the British should have made the mound at best costly to hold or at worst untenable, rather than trying to take possession of it themselves.

But this was still early in the war and the Allies believed that their major campaigns which were due to commence within weeks would be war winning and so the decision was taken to take Hill 60.

The task was allotted to 13th Brigade of 5th Division.

At 1900 hours on the 17th April five mines were detonated under the German positions on the hill. Two pairs and then a single detonation – all at 10 second intervals. These created three large craters in front and two smaller ones behind.

As the debris settled the 1st Bn Royal West Kent launched their attack, rapidly gaining the mine craters and the German positions.

The dazed Germans of Infantry Regiment Nr 172 put up little resistance and the RWK and support engineers began turning the trenches around so that the fire steps faced the other way. The RWK had suffered just 7 casualties.

In the early hours of the morning the Germans launched a counter attack which was repulsed but the struggle for possession of the hill was far from over.

One of the reasons that the Germans were eager to recover their lines was the fact that unbeknown to the British they had been planning a large scale gas attack against their positions.

Some of the new tenants on the hill actually noticed an unusual smell in the air but the cylinders of chlorine gas that had been dug in and concealed appear to have gone unnoticed apart from some small amount of leaking (French accounts state that the British did find cylinders but that the report was lost in the administration).

In the event the wind direction changed and the Germans would settle on gassing the French on the far side of the salient. This attack took place on the 22nd April and acted as the opening of the 2nd Battle of Ypres.

On Hill 60 the custody of the line was now handed over to 15th Brigade and the 1st Bn East Surrey Regiment (on loan from the 14th Bde) who installed their C Company in a position covering the railway line and around the hill to the left hand crater.

One of the problems for the defenders was the fact that as these were the old German trenches there were a couple of communication trenches running between the two new front lines and these had to be blocked off.

The Germans had also been working a sap down the left hand side of the British position which allowed them to get within 20 metres of the Surrey’s left flank. Equipped with steel loop holes this stronghold allowed the German snipers every advantage for causing havoc in the British trenches.

On the 19th April Lt Roupell took half of his A Company up to relieve the left of C Company on the hill. Thus there were now two half companies manning the position with the remainder of the battalion positioned along the road behind them.

At 1100 hours the following morning the German artillery opened up on the hill and the supporting trenches. With much of the defensive work still facing the wrong way the field guns firing at very close range caused terrible damage.

At 1500 hours the Germans attempted to rush the craters from their stronghold. The snipers ensured that any head raised above the parapet was soon lowered again, voluntarily or otherwise.

To put an end to this situation Private Edward Dwyer climbed out of his trench and constantly harassed the stronghold with grenades despite coming under a hail of fire. His bravery was acknowledged by the award of the Victoria Cross. (He was killed at Mametz Wood in 1916 and is buried in Flat Iron Copse cemetery).

Two more Victoria Crosses would be awarded for the day’s fighting.

Lt George Roupell’s Company was strongly attacked from the old communication trenches and the bombardment had left him with very few men and a trench that had been all but destroyed. Despite being wounded a number of times he directed the defence of his position throughout the attack. In the evening he managed to get back to his Battalion Headquarters to make his report and then returned to the front with reinforcements.

2nd Lt Benjamin Geary of C Company had responded to Roupell’s calls for assistance and taken his platoon forward. They managed to get into the left hand crater where they found men from the 1st Bn Bedfordshire Regiment who had been brought up from support. Fighting and organising the position throughout the evening and on through the night Geary ensured that all German attempts to take his position were repulsed. 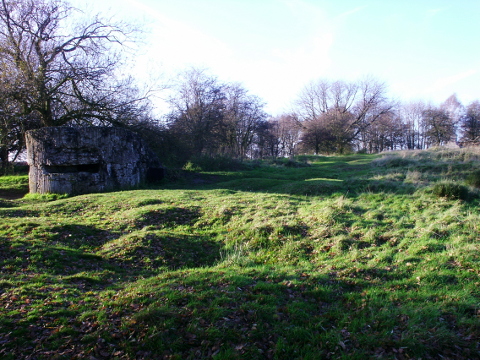 The following day another would be awarded and this time it would go for the first time during the war to a member of the Territorial Army.

Queen Victoria’s Rifles were the 9th Bn London Regiment and were amongst the first Territorial units to arrive in France. During the initial capture of Hill 60 they had been in reserve and taken little part in the fighting. Now on the 20th April they were moved forward to aid the East Surreys on the hill.

Lieutenant Harold Woolley was sent forward with an ammunition party and in the midst of a renewed German bombardment and assault found himself commanding the garrison by now made up of a mixture of men from various units.

The Germans had moved field guns onto the Caterpillar less than 300 metres away and these were knocking down the protecting edges of the mine craters.

When word reached Woolley that he and his men were to retire he realised that this would leave the position under strength and reported that he would wait until a relief could be organised. The situation became increasingly difficult and although runners were sent back asking for reinforcements none were forthcoming.

Thinking that his messages were not getting through Woolley ran back across the battlefield in person. He was told that he was going to be relieved by 1st Bn Devons, but it was only on a second return to the rear that any of them were sent up with him. During all this time the Germans had continued their assaults and the British were running short on bullets and grenades, having to scavenge what they could from around them.

Much to Woolley’s dismay on returning with the Devons he discovered an entire squad of trained bombers (The term bomb in trench warfare invariably means grenade) from the Northumberland Regiment gathered just behind the rear of the hill waiting to be told where they were needed. They were swiftly informed.

For his encouragement, direction and personal bravery throughout the night of the 20th Harold Woolley was awarded the Victoria Cross. As a chaplain following the war he would return to Hill 60 to dedicate the memorial to the QVRs.

Hill 60 is lost again
The Monument at Hill 60