The British Use Gas

Visitors to the Canadian Memorial at Vimy or the French Cemetery at Notre Dame de Lorette can look out across the great plain and marvel at the size of the great crassiers to the north-west marking the old Béthune coal fields. 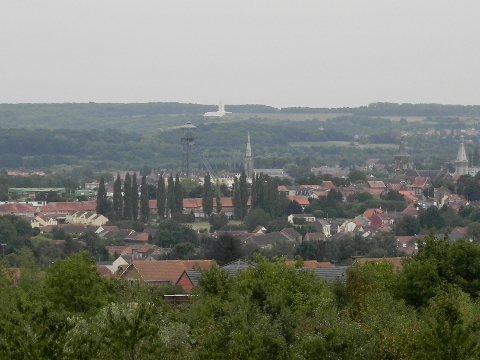 What many do not realise is that just behind those giant coal tips lies the area of the Loos battlefield where the British Army first used gas in warfare on 25th September 1915.

The ill fated battle of Loos was in fact planned as an accompanying assault to a French attack on Vimy Ridge.

The French commander Général Joseph Joffre had seen his 10th Army fail to take Vimy Ridge in May of that year, and both he and the local commander Général Ferdinand Foch were of the same mind: more guns and more shells were needed if Vimy Ridge was to be taken and held — as it had, and hadn’t, in May.

There had been much talk about what to do for the remainder of 1915 after the failures of the summer. Britain tended to favour the idea of sitting it out whilst waiting on the new Kitchener Armies to be up and ready in 1916.

There was also the great initiative in the Dardanelles and hopes were once again high that a breakthrough there would lend aid to the Russian cause which on the eastern front was becoming ever more desperate.

For his part, Joffre was utterly convinced that the only way to win was in France, on French soil and with every man and round of ammunition available.

By August it was evident that the Dardanelles campaign was in its dying throws and both Russia and now Italy were on a backward footing.

Joffre wanted the British to attack eastwards towards Loos and Lens from the north of Vimy and thus threatening the German rear positions. This area, Joffre insisted, offered great opportunities for the British to secure a breakthrough.

The name Loos is actually pronounced closer to Loss than Loose. It should also be borne in mind that the full name of the village is Loos-en-Gohelle. The town of ‘Loos’ is near Lille.

Lt General Sir Henry Rawlinson (Commanding IV Corps) was of a somewhat different opinion, and when his commander, Sir Douglas Haig (whose First Army would have to carry out the attack) went to look he also had serious misgivings: the land is almost flat with any slight ridges to the east already in the hands of the Germans. Worse and as can still be seen today, the area is almost completely devoid of any cover. The British would be attacking in full view of the German defenders.

A more unpromising scene for a great offensive battle can hardly be imagined; and on 25th September 1915 the surface was a barren prairie of rank grass, intersected by trenches whose white chalk parapets defied concealment.
British Official History

Whilst previous British attacks to the north around the Aubers Ridge had not brought any great success they could be re-attempted with a greater chance of a breakthrough across known countryside, rather than the open field of Loos. Haig and the BEF’s Commander in Chief, Field Marshal Sir John French argued that such an attack would still serve to support the French at Vimy.

Joffre would have none of their arguments and appealed directly to Field Marshal Lord Kitchener in London. Kitchener rather surprisingly came down on Joffre’s side. The British were there, he said, to assist the French and although Sir John retained a certain amount of independence as to the — how — on this occasion he should go along with General Joffre’s — where. The British should be seen to be aiding the war effort.

Haig was still not happy but to soften the blow he was informed that the attack would be carried out with the aid of a discharge of gas.

Gas had been used by the Germans at Neuve-Chapelle in October 1914 but nobody had noticed. Neither the quantity, or the method of distribution (in shells) had brought it to the attention of the French.

In January 1915 the Germans had again used gas, this time on the eastern front against the Russians at Bolimor. They obviously hadn’t considered that at such a low temperature the gas would freeze and be rendered useless.

On 22nd April 1915, however, the Germans launched the first successful gas attack (against the French) as an opening to the 2nd Battle of Ypres.

Condemnation by the Allies was swift to follow, but in reality the Germans had merely given a green light to everybody else to use such a weapon. Of course once both sides were using it, gas stopped being barbaric and became a necessary implement.

In 1915 both sides tended to use chlorine gas but later in the war an
ever increasing variety, including mustard gas, would be used.

The fear of gas proved more harrowing to soldiers than its actual capacity to kill, but soldiers poisoned by gas continued to suffer from long term respiratory problems long after the war had ended. For many, the after effects cut short their lives by many years.

Trained gas officers were brought up to the front to supervise the placement of the 140 tonnes of gas in over 5,000 canisters, for, at this stage gas was delivered not so much by artillery but by the weather.

Everything depended on the wind, and The Met Office in London were required to continuously predict which way the wind would be blowing and how strong.

Obviously the wind needed to be blowing towards the Germans but if it was too light it wouldn’t take the gas with it and the British soldiers would have to attack through their own gas cloud. On the other hand if the wind was too strong it would simply blow the gas cloud apart and render it useless.

The other factor taken into account was the limited efficiency of German gas masks. It was thought that exposure to gas for longer than 30 minutes would be sufficient to neutralise the masks — but could the wind be relied upon to play ball for almost twice that long.

In some respects the problem was academic. There simply was not enough gas in stock to maintain the necessary level (Twelve cylinders for every twenty required). It was therefore decided to launch a smokescreen in between two discharges of gas. This it was hoped would keep the cloud cover but ultimately the amount of gas was still insufficient to overcharge the German respirators.

With or without gas: Two plans

Haig’s First Army, had two plans, one for each possibility — with gas and without. If gas couldn’t be used then Haig only planned to attack on a limited front with a couple of divisions. In daylight and without the aid of gas to give them some cover and an element of surprise his men would be like the French knights at Azincourt almost exactly 500 years before (25th October 1415) trying to make their way up a slight incline towards a defended position. This time the Germans had machine guns and not long bows.

If gas proved to be an option then First Army was going to attack along the front with six divisions. Crucially, two more divisions would be held in reserve — but under the orders of Sir John French and not Haig himself.