Ieper (Ypres) is a town in the Province of West Flanders. The Memorial is situated at the eastern side of the town on the road to Menin (Menen) and Courtrai (Kortrijk).

Each night at 2000 hours the traffic is stopped at the Menin Gate while members of the local Fire Brigade sound the Last Post in the roadway under the Memorial’s arches. 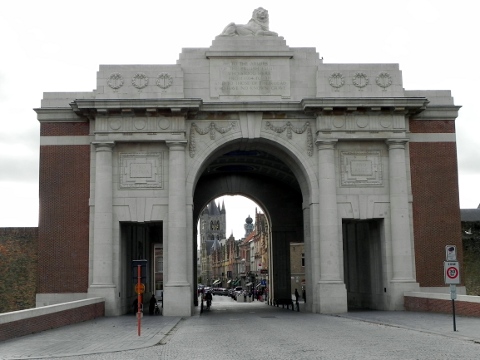 Unlike most cemeteries with just one register, The Menin Gate has dozens, further highlighting the scale of numbers commemorated on its walls.

It is generally easier to use the register to find who you are looking for and then search for the panel.

The Panel Numbers quoted at the end of each entry relate to the panels dedicated to the Regiment served with. In some instances where a casualty is recorded as attached to another Regiment, his name may alternatively appear within their Regimental Panels. Please refer to the Memorial Register Introduction to determine the alternative panel numbers if you do not find the name within the quoted Panels.

Units are in Regimental and not Alphabetical order.
The names are then listed by rank first and then alphabetically. 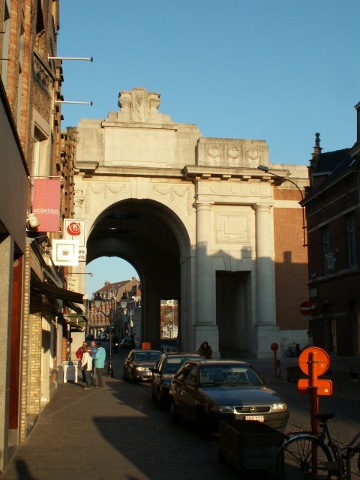 The Menin Gate is one of four memorials to the missing in Belgian Flanders which cover the area known as the Ypres Salient.

Broadly speaking, the Salient stretched from Langemarck in the north to the northern edge in Ploegsteert Wood in the south, but it varied in area and shape throughout the war.

The Salient was formed during the First Battle of Ypres in October and November 1914, when a small British Expeditionary Force succeeded in securing the town before the onset of winter, pushing the German forces back to the Passchendaele Ridge.

The Second Battle of Ypres began in April 1915 when the Germans released poison gas into the Allied lines north of Ypres. This was the first time gas had been used by either side and the violence of the attack forced an Allied withdrawal and a shortening of the line of defence.

There was little more significant activity on this front until 1917, when in the Third Battle of Ypres an offensive was mounted by Commonwealth forces to divert German attention from a weakened French front further south.

The initial attempt in June to dislodge the Germans from the Messines Ridge was a complete success, but the main assault north-eastward, which began at the end of July, quickly became a dogged struggle against determined opposition and the rapidly deteriorating weather. The campaign finally came to a close in November with the capture of Passchendaele.

The German offensive of March 1918 met with some initial success, but was eventually checked and repulsed in a combined effort by the Allies in September.

The site of the Menin Gate was chosen because of the hundreds of thousands of men who passed through it on their way to the battlefields. It commemorates casualties from the forces of Australia, Canada, India, South Africa and United Kingdom who died in the Salient.

In the case of United Kingdom casualties, only those prior 16th August 1917 (with some exceptions). United Kingdom and New Zealand servicemen who died after that date are named on the memorial at Tyne Cot, a site which marks the furthest point reached by Commonwealth forces in Belgium until nearly the end of the war. 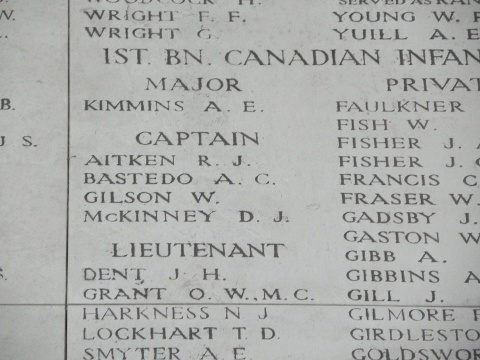 The Ypres (Menin Gate) Memorial now bears the names of more than 54,000 officers and men whose graves are not known.

The memorial, designed by Sir Reginald Blomfield with sculpture by Sir William Reid-Dick, was unveiled by Lord Plumer on 24th July 1927.

There are eight recipients of the Victoria Cross commemorated.

There are four executed soldiers commemorated.