Two roads connect Ieper town centre onto the Zonnebeekseweg. The Torhoutstraat leads from the market square onto a small roundabout. Take the first right turn which is Basculestraat. At the end of Basculestraat there is a crossroads and Zonnebeekseweg is the turning to the left. 7 kilometres along the Zonnebeekseweg, in the village of Zonnebeke, lies the left hand turning onto the Langemarkstraat (further on this street name changes to Zonnebekestraat). The cemetery lies 1.5 kilometres along this road on the left hand side.

Continuing along this road leads you to the Canadian Memorial at Vancouver Corner. Before reaching it you will see a sign to your right for the New Zealand Memorial and Passendale. 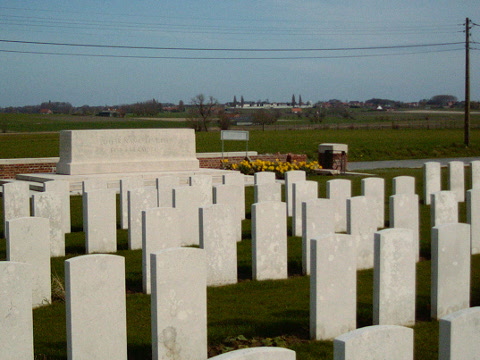 Dochy Farm and the Tyne Cot Cemetery on the right of the horizon.
Behind and to the left of Dochy Farm is a white obelisk.
This is the New Zealand Memorial at ‘s Graventafel
The New Zealanders’ attack in the battle of Broodseinde on 4 October 1917 crossed this area

Dochy Farm, which had become a German strong point, was taken by the 4th New Zealand Brigade on 4th October 1917, in the Battle of Broodseinde. The cemetery was made after the Armistice when isolated graves were brought in from the battlefields of Boesinghe, St. Julien, Frezenberg and Passchendaele. 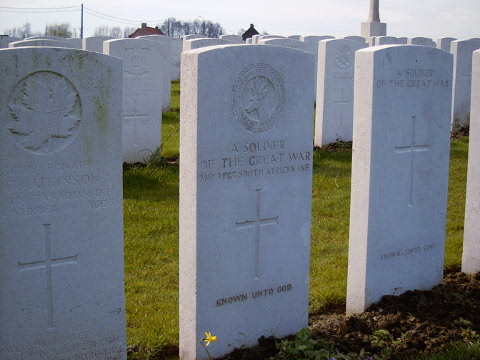 The cemetery now contains 1,439 burials and commemorations of the First World War. 958 of the burials are unidentified but special memorials commemorate two casualties believed to be buried among them. 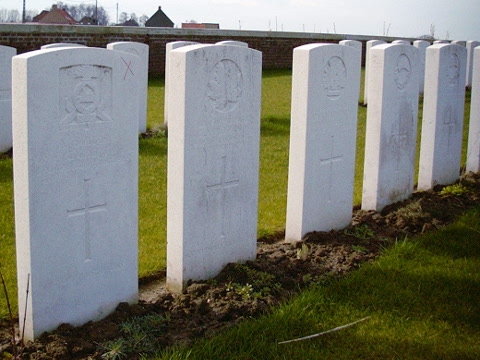 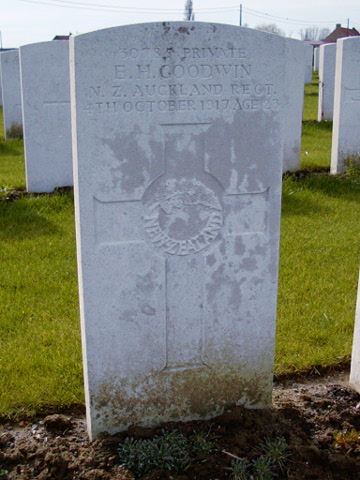 It will be noted that Kiwi graves never carry an inscription.

This was because a small payment had to be made and their government felt that as this was not fair on the poor, no grave carries an epitaph.