From Ieper take the Menin Road (Meenseweg N8) or Zuiderring (N37) as far as the major roundabout where these two roads meet (Hellfire Corner during the war). Follow the signs towards Zonnebeke on the N 37. You will cross over the A19 Autoroute and enter Zonnebeke. Follow the road through the village passing the Memorial Museum on your right.

Continuing towards Broodseinde you turn left at the roundabout into Passendalestraat (You will also see CWGC signs for Tyne Cot Cemetery). Continue up the hill (Tyne Cot will be on your left and the Nova Scotia Monument on your right) into the village of Passendale as it is now given in Flemish.

As you come into the square turn left onto Canadalaan.

If you are coming from Tyne Cot Cemetery, you leave the car park and turn right across the front of the cemetery. At the next crossroads (which is no wider than the road you are on) turn right onto Canadalaan and you are following in the footsteps of the Canadians as they mounted the slope. 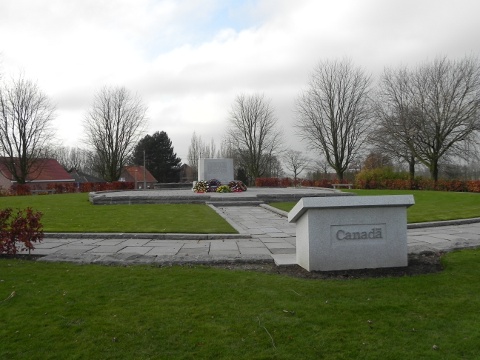 Liberating the Belgian coast and depriving the Germans of their U-Boat facilities had always been a priority for Field Marshal Sir Douglas Haig. He had been obliged to fight the Battle of Arras in April 1917 because of the sway the French Commander in Chief, Robert Nivelle had over the Prime Minister, David Lloyd George.

Whilst Arras was initially a great success, Nivelle’s much vaunted offensive was an unmitigated disaster and Haig found himself obliged to slog on in order to draw the Germans’ attention away from the difficulties being encountered by the French.

With Nivelle dismissed in disgrace Haig was able to turn his attention to his [et project in Belgian Flanders. This was opened on the 7th June 1917 by the (literally) thunderous success at Messines (Mesen). 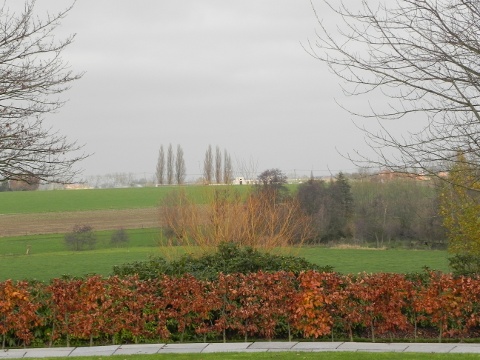 Passchendaele New British Cemetery can be seen in the distance

For a moment the Germans thought that they were about to be driven back but the expected follow up never happened as Sir Hubert Gough was not yet prepared and the delays drifted into weeks allowing the Germans to recover their nerve.

On the 31st July 1917 the string of battles known collectively as the 3rd Battle of Ypres or more colloquially The Battle of Passchendaele began. The artillery bombardment was impressive but only served to destroy the already fragile drainage system. When unexpectedly heavy rain arrived in August the entire battlefield was turned into scenes that have entered into the common memory of what a Great War battlefield resembled.

The initial drive towards Passendale was in the hands of the British and Anzac forces but by October the Anzacs who had just taken Tyne Cot were exhausted and Haig brought the Canadian Corps up from Artois to replace them.

General Currie, commanding the Corps expressed his grave doubts about the venture making it clear that the village could only be taken at great cost. Haig insisted.

The final assaults on Passendale began on 26th October 1917 with the Canadians edging further forward. On the 30th October the Canadian Corps assisted by two British Divisions launched its assault proper.

Passendale had in effect been wiped off the face of the earth, aerial photographs show a once bustling village had been reduced to a lattice work of holes in the ground and rubble. The Germans however defended their positions and in the most appalling rain and mud the two sides fought over the glutinous mud bath that was Passendale.

On 6th November reinforcements were brought up and the battle was truly won. Currie’s prediction of 16,000 casualties was almost spot on.

The position here in Passendale is that of the former Crest Farm which is why this Passchendaele Memorial is also known by that name. 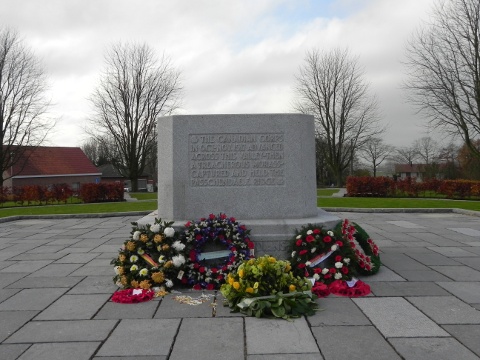