The day that Sussex died

The battle has been described as The day that Sussex died with the 13th Battalion suffering the lion’s share of the casualties.

Many of those who died were never identified in the aftermath of the war and are commemorated on the Loos Memorial at Dud Corner. 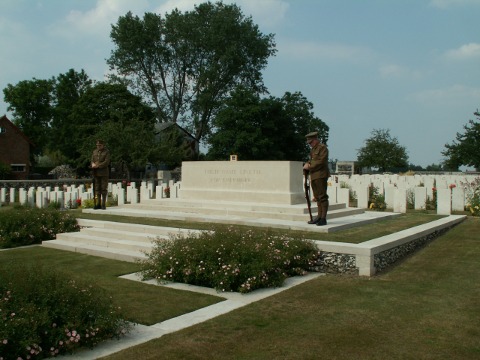 For some families the cost of the five hour catastrophe was more than one son.

Private Leonard Blaker was 29 years old when he was killed fighting in the 13th Battalion. His 27 year old brother, Frank died the same day in the ranks of the 12th Battalion. Leonard is buried at St Vaast Post and Frank is commemorated on the Loos Memorial.

Privates Eric and Tom Blurton served and died together in the 12th Battalion. 19 year old Eric is buried at Cabaret Rouge British Cemetery on the far side of the Vimy Ridge whilst 20 year old Tom is another of the missing commemorated on the Loos Memorial.

Private James Honeyset, already a veteran of the Boer War, and serving in the 13th Battalion was killed, aged 36. He is buried at St Vaast Post whilst his brother Cecil can be found on the Loos Memorial.

Three brothers from the Pannell family; William, Charles and Alfred all fell leaving just George. None of the three brothers were ever identified and are all commemorated on the Loos Memorial.

There were a number of young soldiers within the ranks of the South Downers that fateful day.

Private Harry Mercer had enlisted in the 11th Battalion at Hastings aged only sixteen; eighteen months later and still in theory not old enough to be at the front he would fall whilst taking part in a carrying party. He is also buried St Vaast Post.

On the Loos Memorial can be found Private John Searle of the 12th Battalion – age: unknown. His simple inscription hides the story of a boy who had enlisted at fourteen and a half. By the time that he was deemed Missing in Action he was still only fifteen.

As the news of the first day’s disaster on the Somme filtered through some families were probably thankful that their sons had missed out on the carnage, but it was not yet finished for the Sussex. Not all of the wounded from the Boar’s head would survive.

On the 3rd July whilst being treated in one of the coastal hospitals Private Reginald Jackson died of his wounds and was buried in Wimereux Communal Cemetery (Where he would be joined two years later by John McCrae, author of In Flanders Fields).

He would not have known but his brother Ralph who had also been wounded died the same day and is now another of the regiment buried in Cabaret Rouge.

2nd Lieutenant Edmund Blunden with the 11th Battalion had been waiting with his men to the rear of the British lines expecting to be sent forward at any moment. Instead he was stumbled upon by a retiring party of soldiers who had : ‘blundered dazedly round the trench corner’.

In his, Undertones of War, he writes :

What the Brigade felt was summed up by some sentry who, asked by the General next morning what he thought of the attack, answered in the roundest fashion, ‘Like a butcher’s shop.’ Our own trenches had been knocked silly, and all the area of the attack had been turned into an Aceldama.