Villers- Cotterêts is a small town 22 kilometres south-west of Soissons in the direction of Meaux. From Soissons take the N2 (signposted to Paris, Meaux, Senlis), passing after 3.5 kilometres the Military Cemetery of Vaubuin and after a further 6 kilometres a French War Memorial on the right.

DO NOT TAKE the left hand turn towards the town of Villers-Cotterêts, but continue along the N2 as the memorial is north of the town. Take the next right hand slip road and then turn right along the D81 towards Vivières. After a further 3 km, you will arrive at the Guards Grave Cemetery set down in a hollow on the right. Immediately after it as the road swings back to the left you will see this memorial on your left. 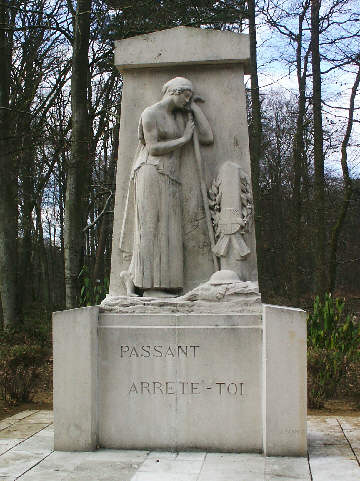 The rearguard action of the 4th (Guards) Brigade

At this moment in the war the British Army was still in the process of retiring in front of a numerically superior enemy, a retirement which had been taking place since the very first encounter at Mons on 23rd August 1914.

Just north of Villers-Cotterêts within the Forest of Retz you will find the Guards Grave Cemetery and this small monument dedicated to the men who fell here.

The 4th (Guards) Brigade was covering the retirement of the 2nd Division, with the Irish Guards and 2nd Coldstream, under Lt Colonel Hon George Morris of the Irish Guards in the front line and the 2nd Grenadiers and 3rd Coldstream in second line at Rond de la Reine. (The clearing just after the Cemetery and the site of the monument).

The men were exhausted after their long march and the fighting that had taken place at Landrecies near Le Cateau-Cambrésis.

We are used to seeing photographs of desolate forests reduced to a few gnarled stumps, but of course in the early months of the war these forests were much as they are today with thick undergrowth and the fighting became highly confused.
On the northern side of the forest, about four kilometres away are the villages of Soucy and Montgobert. Between these two the 2nd Battalion of the Grenadier Guards and the 3rd Coldstream Guards dug themselves in with the Coldstream and Irish Guards in a line on the edge of the forest.

The Germans launched their attack at 1000 hours and forced the outer line back to the forest. Whilst the density of the forest helped the defenders by slowing the Germans down it made communicating between units very difficult.

The Guardsmen were forced back through the forest to this point the Rond de la Reine where some of the fiercest fighting of the day took place as the Guards were subjected to sustained machine-gun fire. Lt Colonel George Morris was killed and to make matters worse Brigadier General Scott-Kerr commanding the Brigade was badly injured as his men retired from this location.

The loss of two senior officers did little to help the confusion but the Guards remained steady and continued to retreat in good order. The fighting continued throughout the day but by 1800 hours some relief was provided by men of the Royal Berkshire Regiment and the Guards managed to extricate themselves from the forest and rejoin the continuing general retreat towards the Marne.

The Brigade had been successful in its purpose but at the cost of 300 fatal casualties.

Erected by Lady Cecil in honour of her son, it also honours those Guardsmen that fell here on 1st September 1914.

George Cecil was 18 when he died and was one of the four officers brought in from the local Communal Cemetery to Guards Grave cemetery a short distance away.

An inscription on the rear explains :

In honour of the officers and men of the Grenadier Coldstream and Irish Guards who fell near this spot on 1st September 1914. This memorial was placed here by the mother of one of them and is especially dedicated to Second Lieutenant George Edward Cecil

The inscription on the front is possibly best translated as: