The Forest of Retz lies alongside the N2 road between Soissons and Villers-Cotterêts. Once within the forest, you will see signs directing you to the Tour d’observation du Général Mangin.

The stone memorial has been there since 1926, but a new tower (replacing the original destroyed in a storm in 1924) has been constructed ready for the centennial anniversary. 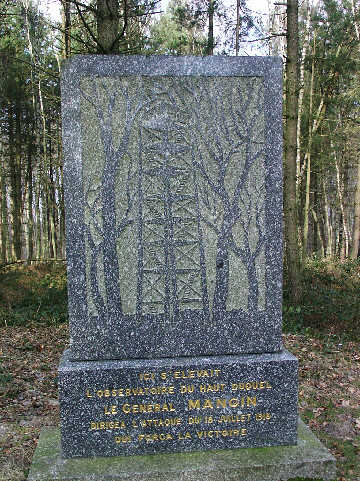 On 21st March 1918 in a bid to win the war before the recently arrived American Army could make its full impact felt, the German Army launched a massive assault (Operation Michael) against the British 5th Army in the area of the Somme.

Initially the British lost all cohesion and collapsed against the battering blow, but little by little the German advance was slowed down and eventually halted. The Germans had, however, retaken in days what the British had struggled to take for months.

This first offensive was halted on 6th April, but three days later on the 9th a second blow (Operation Georgette) fell on the British along the Lys River in Flanders.

The failure of these two hammer blows to crush the British once and for all placed Ludendorff in a dilemma. He was utterly convinced that if he could beat the British then the French would simply seek terms. To try, however, a third operation against the British along the Ypres salient would require an attack elsewhere against the French. This would keep both Allies guessing and prevent them from gathering their reserves.

The Second Battle of the Marne

To this end on 27th May 1918 General Ludendorff launched Operation Blücher against the French positions along the Chemin des Dames, the scene of Général Nivelle’s crushing defeat the year before.

At 0100 hours more than 4,000 pieces of German artillery opened up along a thirty kilometre front against the French Sixth Army. It is reckoned that over the next three hours two million shells fell on the French, neutralising their artillery and impeding the possibility of launching any form of counter attack.

Général Duchêne, the commander of the Sixth Army had flaunted Général Pétain’s orders to form a defence in depth and had his major units not only up front but on the German side of the River Aisne.

The result was a swift advance for the Germans and a shattered defence for the French. By the end of the month the Germans had punctured the French lines by up to fifty kilometres creating a salient around Château-Thierry. On 9th June Duchêne was relieved of his command and replaced by Général Degoutte.

The Americans at Belleau Wood

To the west near Noyon it became evident to the French that another assault was about to be made. Prisoners revealed that it would take place on 9th June against the French Third Army. This time the French Generals had their defence well laid out with lightly held forward positions with reserves ready to lead counter offensives once the right moment had been ascertained. The German Gneisenau Offensive was launched just after midnight and the French retreated before it for some kilometres.

The advance however did not make spectacular gains as the others before it had done, and Général Foch, the recently appointed Allied Commander in Chief, was ready to make his counter attack.

To lead it Foch summoned Général Mangin back to power. Manginhad been held in disgrace since the debacle on the Chemin des Dames and in which he had played a leading role.

This was a move not without risk on Foch’s part, but Mangin had a reputation for aggressiveness (leading to his nickname of The Butcher) and that was something the hour called for.

At 1600 hours on 10th June, Mangin was given command of the XXXV Corps plus five reserve Divisions. Suffering no delays from his commanders Mangin counter attacked along the Matz Valley at 1030 hours the following morning. The French had some success but within 24 hours it was apparent that the German defences were for the moment too strong and further attacks were called off.

Within the ranks of the XX Corps were the 1st and 2nd US Divisions as well as the famed Moroccan Division — which itself included a Battalion of the Foreign Legion as well as the Russian Brigade ; made up of Russian soldiers who had remained loyal to the Allied cause.

The decision was taken that Mangin would lead the counter attack on the morning of 18th July which must have kept the Germans waiting and wondering what had happened with their intelligence reports for an attack on the 14th July (The French National Holiday).

Between the 11th and 13th July Mangin’s men had indeed made a few small thrusts to even up the line here and there but what the Germans did not realise was that in great secrecy the Tenth Army was moving into the Forests of Retz and Villers-Cotterêts. The equivalent of 24 Divisions of Infantry, 1500 guns and more than 300 tanks. The night of the 17th was foul with a constant downpour of rain leaving the soldiers still trying to get into position ; soaked through.

On the opposite side of the Château-Thierry salient Général Degoutte’s Sixth Army was also readying itself for action.

Within the Forest of Retz Général Mangin set up an eight platform high observation tower from which he could survey the ensuing battle.

The XX Corps acted as the spearhead for the attack with the Moroccan Division in the centre and the Americans either side. The barrage opened up at 0435 hours on the 18th July with the infantry immediately following the creeping barrage. The surprise was complete and over the next few days the Tenth Army made great gains before encountering heavier resistance as it pushed steadily on towards Soissons.

A monument near the village of Buzancy recalls the actions of the US 1st Division in the advance towards Soissons and of the heavy toll in casualties which they suffered.

US 1st Division Monument at Buzancy

By 20th July Mangin’s Tenth Army was finding it hard going south of Soissons but crucially they had done enough to ensure that the vital rail link there was now untenable. Even the reserve system was now under French bombardment. This was one of the major reasons which convinced the German High Command that they would have to evacuate the Château-Thierry salient.

With the Allies now counter attacking on a daily basis, Ludendorff found that his dream of launching the final hammer blow against the British was going to have to be put on hold and in all probability postponed indefinitely.

The Official History recounts how the Americans left their Field Hospital behind for four days to assist the Highlanders, however, some lucky soldiers who wandered into French Medical ambulances found themselves recuperating in the south of France.

Général Foch now ordered General Pétain to press on with all possible might against the western flank of the salient. However rather than just trying to push eastwards they were to push south eastwards in order to pre-empt any attempt at an orderly withdrawal similar to 1917 when the Germans had laid waste to the land.

On 25th July Villemontoire was captured by the French 67e RI an infantry regiment raised in Soissons. A monument commemorating this act by the local boys can be found on the edge of the village not far from the CWGC Raperie Cemetery.

The original tower was brought down by a storm in October 1924 so a monumental stone was created showing the tower and explaining its significance. It was inaugurated on 4th November 1926 in a ceremony which reunited Maréchal Foch, seven general including Gouraud et Weygand, a number of Senators and the mother, wife and four children of Mangin himself (who had died in 1925).

A recreation of the tower is now in place thanks to a local 100th Anniversary project.