To the north east of the town of Soissons in the Aisne lies a high ridge running west to east and nicknamed the Chemin des Dames : The Ladies’ Road.

It received its name following its use by the two daughters of Louis XV in the eighteenth century. They travelled along the highway on their way from Paris to meet their governess in the Château de la Bove near Vauclair.

In 1814 Napoleon’s retreating soldiers fought along the ridge against the invading Austrian and Russian armies. Today there are two monuments celebrating the Napoleonic associations of the road. 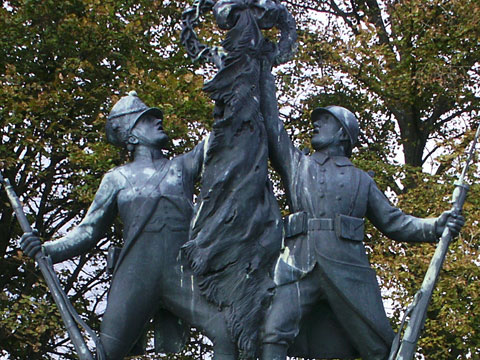 More than anything else though, the name of the Chemin des Dames has become synonymous with the disastrous Nivelle Offensive in April 1917 and the resulting mutinies within the French army.

The collapse of the offensive and the soldiers eventual refusal to take part in any more wasteful exercises led to Nivelle’s dismissal and the appointment of Pétain.

On 20th January 2008 the last soldier to have fought in Nivelle’s battle passed away at the age of 110.

After the 1st Battle of the Marne in September 1914 the advantage of territorial positioning lay with the retreating German Army. As they fell back towards the coast in the Race for the Sea the German High Command chose all the most advantageous positions giving them the edge in height almost everywhere.

So it would prove to be at Ieper, on the Somme and here on the Chemin des Dames.

During the First Battle of the Aisne in September 1914 initial breaches of the Chemin des Dames by the French and British were subsequently repulsed by the Germans. It was the beginning of trench warfare.

From Laffaux in the west to Craonne in the east the Germans made full use of natural positions and fortified everything. The ridge is made of chalk and there are numerous quarries in the area all of which were used as fortifications and shelters. The difference in terrain between the north side and the south side is quite remarkable. The French attacking from the south were faced with numerous minor ridges and valleys and slopes that reach 30 degrees in places as the land suddenly rises to 200 metres.

You could almost compare it to some enormous natural castle wall with a moat in the shape of the valley below and the crenulations formed by the numerous concrete bunkers and machine gun positions.

Nivelle’s Plan for the Battle of 1917
Touring the Ridge