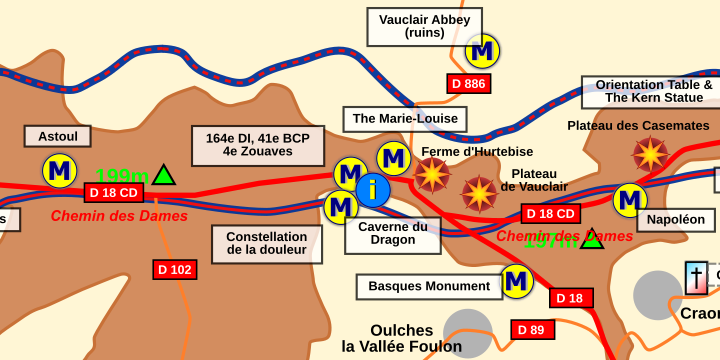 Museum of the Chemin des Dames

The creutes of the Chemin des Dames 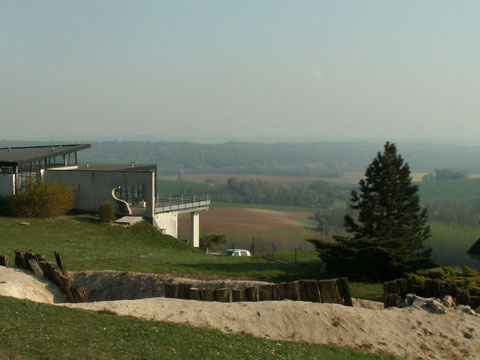 So what is a Creute? You could ask nearly the same question in the north around Arras.
What is a Bove?

The answer is the same regardless of the local dialect : an underground cave created by the quarrying of stone for building.

In Arras the British used them for housing troops, on the Chemin des Dames it was the Germans who found them ideal shelters.

Following the 1st Battle of the Marne the Germans entrenched themselves around the Ferme d’Hurtebise a hundred or so metres away whilst the French held this enormous cave. It was in fact the only point on the ridge that the French held.

On 25th January 1915 following an intensive bombardment the Germans attacked the French positions and pushed them out. The new occupants wasted no time at all in refining the cave system. 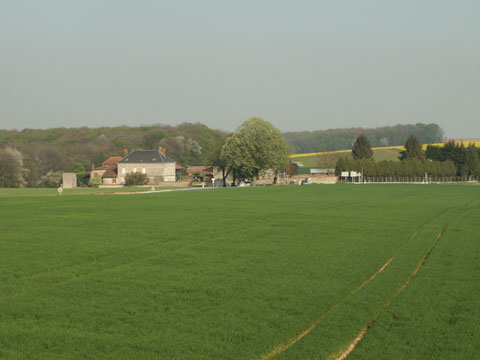 No longer just a hole in the ground, the quarry was turned into a complex with command posts, sleeping quarters and even a chapel. Electricity was installed and a well provided fresh water (compare this with the French forts at Verdun which didn’t even have toilets until 1917 !).

More importantly, they began digging new entrances into the northern side of the ridge.

On 16th April 1917 as the French 33e Régiment d’Infanterie coloniale mounted the ridge they immediately came under fire from machine gun nests behind them.

It was the same story the following day when the 4e Zouaves attempted to take the position and the story replayed itself for the next two months as the French struggled in attack after attack to take the area.

The German’s who lived here nicknamed the cave the Dragon’s Lair — Drachenhöhle — and when the French finally took it the name stayed.

On 25th June 1917 the 152e and 334e RI attacked the caverne. During the attack the northern entrances were subjected to a heavy bombardment and whilst a medic called Jean Py of the 152e RI was treating a wounded soldier he spotted a German soldier coming towards him with his hands up.

The German gestured for Py and his colleague to follow him as there were other Germans who wished to surrender.

He took them down and into a cave occupied by 150 German soldiers who had become trapped. And so the Caverne du Dragon was taken by a medic, a stretcher bearer and a pistol.

The French success though did not last very long. A month later the Germans launched an attack and managed to take their side of the underground system.

For months the two sides had to live side by side in the caverne with only a hastily built wall separating them. Each side living in the fear of being gassed out by the other, terrified by the least sound made on the other side of the wall.

Following the battle for Malmaison in October the Germans were forced to relinquish their grip on the northern sector of the caves, but they would return again in May 1918 as they swept through the region.

The Dragon’s Lair would remain in German hands almost until the Armistice. It was only definitively taken by the French on 23rd October 1918.

The quarry has now been turned into a museum which traces the everyday lives of the men that lived here. The new building (1999) seems rather out of place to me with its modern style. You might be expecting a concrete bunker, not a glass fronted lookout point. 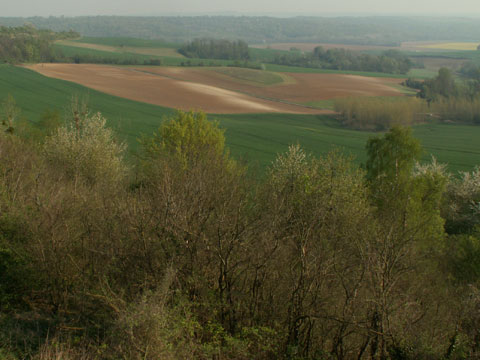 Looking out across the valley

The tours are interesting but in making it all easily accessible the Aisne Council have made it a bit bland. However, go and see for yourselves. It is by no means expensive and does give a very good idea of how the two sides were forced to cohabit the same system of tunnels.

From the viewpoint at the rear you overlook the valleys beyond with the ridges running away from you. The drop in front of you is fairly dramatic as well. Together with that at the Plateau de Californie further along the road you gain a very good idea as to the enormous task Nivelle set his men.

Regimental Monuments at the entrance 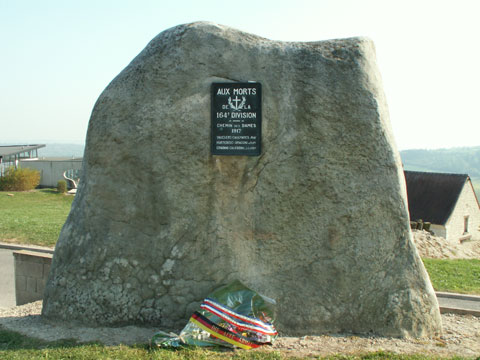 The 164e Division d’Infanterie (DI) were initially an independent unit. They were assigned to VII Corps in the Fifth Army in May and fought all along that front (From here to Craonne further along the road) from May to July.

It was this Division which finally managed on 25th June 1917 to take the Caverne du Dragon and 307 prisoners.

The Ferme de la Creute was situated next to the caverne and the position was known as Creute Farm up until it was baptised with its new name.

There is another plaque honouring the regiment on the wall at Hurtebise Farm.

The 41e Bataillon de Chasseurs à pied (Light Infantry) were part of the 164e DI and were involved in numerous attempts to take the Caverne and Hurtebise Farm throughout May and July 1917.

Leaving the Caverne du Dragon it is only a few hundred metres to the Hurtebise Farm.