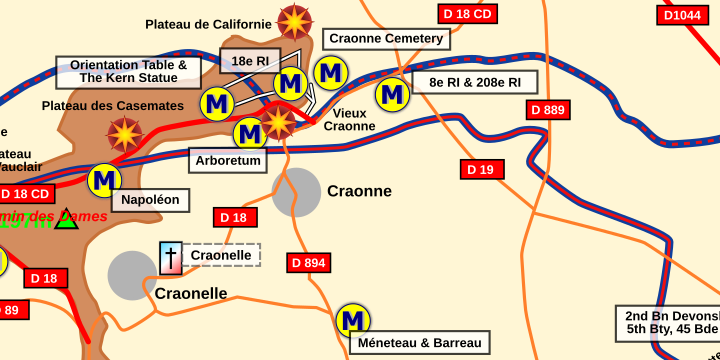 The French I Corps were the left flank of Général Mazel’s Fifth Army. Their 2e Division d’Infanterie (DI) would attack the area of Hurtebise whilst the 1er DI would be responsible for the village of Craonne and the Plateau de Californie.

Less than a fortnight earlier the Germans had captured the plan of attack for a neighbouring regiment near Berry au Bac. The Germans knew pretty much everything about what was going to happen from the French side.

View towards Hurtebise: Craonnelle in the valley is all but hidden
On the ridge is the Basque Monument

The plateau was the observation point for the German artillery at Corbenny and Brimont, which far from being silenced by the French bombardment, put down its own barrage just an hour before the commencement of the attack.

The French, massed in their jumping off lines, lost considerable numbers of casualties before they had even started the day, and a sudden bombardment like this can put it into your head that : perhaps they know we are coming.

The infantry left their trenches and started their advance. At first all seemed to be going well but the moment they reached the ridge itself, all hell broke loose.

In the afternoon anything that had been taken was counter attacked by the Germans, their artillery and machine guns remaining supreme over the battlefield. The 2e DI trying to take the wood to the east of Craonne was so badly mauled (3,800 casualties that morning) that it had to be replaced.

One of its regiments, the 208e RI lost, 1,641 men in the opening hours of their attack and had all but ceased to exist.

For the next few days the French tried to dislodge the Germans from Craonne in order to get to the plateau but it proved impossible.

Long before the 16th April the French had lost mastery of the air in the sector (something governed as much by new aircraft as anything else) and the foul weather had prevented even minimal observation.

Thus, the French were not up to date as to where the German artillery was, nor were they truly aware as to where all the machine gun points were.

Some of these reinforced concrete bunkers were quite capable of withstanding anything other than a direct hit by heavy artillery and they were scattered across the territory the French were trying to take.

By now the French were exhausted from 48 hours of constant fighting and Général Micheler, who was directing the battle as a whole, wrote a report to his Commander in Chief: Général Nivelle.

Allowing for the losses already taken, the dreadful weather which didn’t look like changing, the fatigue of the soldiers, lack of shells…it becomes quite a list of pertinent points…it would be better to call off the grand scale offensive.

Calling off the offensive after 48 hours was something that in theory Nivelle was sworn to do. It was part of his big selling point to Lloyd George, the British Prime Minister. If we don’t break through, he had said, we quit. No more grinding Battles of the Somme.

What did Nivelle do ? On 22nd April he decided to throw in the Tenth Army as well, and try again.

To the north the British were still fighting at Arras — what was supposed to be a secondary battle. Field Marshal Haig was fairly supportive of the French continuation, after all they had made considerable gains and taken a lot of prisoners and material.

They hadn’t, however, broken through.

In January 1917 Haig had remarked that whilst Nivelle seemed to have his battle plan laid out in three phases, he seemed to have forgotten about the fourth phase — what do we do if it all goes pear shaped ?

If you have not already done so, it is quite simple to visit the plateau from Craonne Village.

From Craonne take the minor road, near the church, towards Pontavart, turning left onto the D 925 in the direction of Berry-au-Bac. Almost immediately turn left again onto the D 89 and drive to the Ville aux Bois lès Pontavert where you will find a memorial to the 2nd Battalion Devonshire Regiment who perished there almost to a man in 1918.

If time is short, simply continue towards Berry-au-Bac where you will find the French Tank Corps Memorial at the roundabout.