The panorama at La Royère 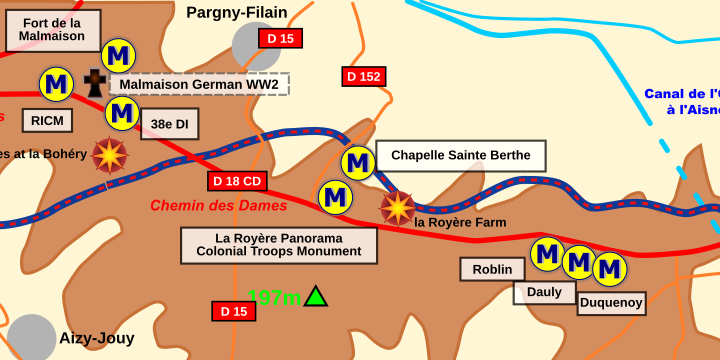 Another couple of kilometres along the road you will come to this parking space and panorama which looks out over the valley of the Ailette, the Bove Wood and the villages of Pargny-Filain. 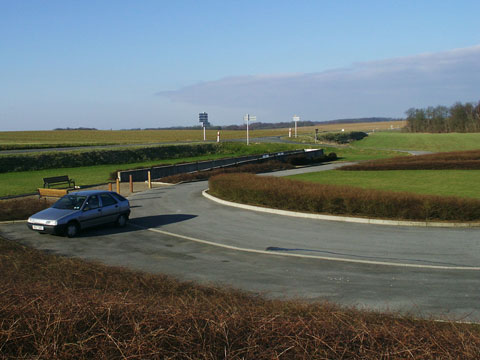 A sunken walkway representing the trench lines offers a number of panels explaining the types of regiments within the Colonial troops.

The Colonial Troops of France

As France’s overseas territories grew she realised that she had insufficient Marines to guard all the ports. In Africa and Indochina the European soldiers suffered from tropical diseases and could, in theory, be recalled back to France at any moment.

In order to address this problem it was decided to recruit local regiments from these territories.

In 1900 these regiments of colonial troops were placed under the French War Ministry and in 1910 the then Colonel Mangin published a book called La Force noire : Black Strength.

Mangin launched a campaign suggesting that in Black Africa, France could find a reservoir of soldiers who came from a fighting culture and could be used to defend the mother country.

Opinion was split — yes it sounded good, but was it a good idea to give the locals guns ?

Two years later Mangin’s policy became effective and a form of conscription based on a lottery came into being. (A similar idea would be put forward by the Australian Prime Minister during the war and defeated by public referendum; but only just. Conscription was never introduced in Australia.)

Although 32,000 colonial troops were called to the colours in the opening months of the war, it was not always smooth running, and revolts broke out in some areas against the idea of enforced service : to defend France.

Racism within the French Army had also to be contended with as many officers did not think that blacks were up to the job (Similar ideas pervaded the US Army when it arrived later in the war. Only white Americans were allowed into battle, the Negroes would find it all too complicated !)

Once, however, German propaganda started complaining about atrocities and savage rites carried out on their soldiers, the French became much more supportive of their Colonial soldiers.

It was obvious, they declared, that these Negro soldiers with their short hair styles and unusual faces were far superior to the murderous Huns who destroyed villages and massacred women and children.

In the four years of the war some 475,000 colonial troops would be placed under arms. A further 200,000 mostly Algerian and Indochinese (nowadays Vietnamese) provided valuable labour.

There were a number of different units to which a Colonial could belong.

Colonial Infantry were made up of Senegalese, Anamite (Indochinese) and Malagasy Tirailleurs who wore a khaki uniform rather than the French Horizon Blue.

Some of the more brightly coloured uniforms were worn by the Zouaves who were part of the North African Army as opposed to raised Colonial Troops.

These Zouaves like the Chasseurs d’Afrique, cavalry unit were made up of pieds noirs : Frenchmen living in north Africa.

Why pieds noire (black feet) ? Because when the Africans saw these French colonialists, the boots they were wearing made it look as though they had black feet !

Indigenous Tirailleurs in the North African Army were recruited in Morocco, Tunisia and Algeria (The Turcos), whilst the Algerians also provided cavalry called the Spahis.

Almost all of these soldiers would fight in France and 72,000 would end their days on the battlefields fighting for a mother country they had, up until then, never seen.

Over 25 years later it would be the next generation of this African Army that would lead the French landings in the south of France and march through to Alsace.

The weather takes its toll

To the north at Arras : the British armies had opened an offensive on 9th April 1917 in the midst of snow storms. Soldiers were found frozen to death during the night. Here on the Chemin des Dames a week later the weather was still atrocious.

The soldiers from hotter climates found themselves waiting it out in freezing cold trenches and their bodies could not cope — the Indian Army had the same problem in 1915 and found better employment in the middle east.

Over a thousand soldiers had to be evacuated before the battle had commenced and when it did their losses were considerable with 7,500 casualties across 2e Corps Colonial.

Once their officers had been killed the soldiers already terrified and frozen to the marrow lost all of their offensive spirit.

This was the end of Mangin’s idea to use Colonial troops en block and he came under severe criticism for having sacrificed them needlessly.

The answer it was decided was to have regiments made up of both black soldiers and white. The celebrated Régiment d’Infanterie Coloniale du Maroc (Whose monument you may have just seen) were composed of two battalions of white soldiers a battalion of Senegalese Tirailleurs and a battalion of Somalians.

From there on in, the Colonial troops brought spectacular results. 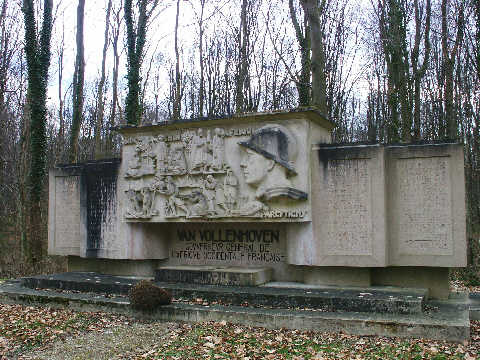 Van Vollenhoven was Dutch by birth but grew up in Algeria taking French citizenship in 1899 at the age of 22.

In April 1915 he took up a position as a Sous Lieutenant in the RICM.

After being wounded numerous times and having received numerous citations for valour, he was asked in May 1917 to return to his Civil duties and take up a post as Governor General of French West Africa — this at the age of 40.

His period in Africa didn’t last very long though, for by the end of the year he was engaged in a major disagreement with the French Government over the recruitment of African soldiers. He quit his post and rejoined his old regiment, this time as a Captain.

His argument was not about whether they should be recruited, but that they were being sacrificed gratuitously.

He would be killed near Soissons on 20th July 1918 leading his men into battle during the Second Battle of the Marne.

The monument to Joost Van Vollenhoven

As you leave the car park turn right following the signs down to the Chapelle Sainte Berthe.