Webmatters : Visiting the Chemin des Dames: The village of Soupir 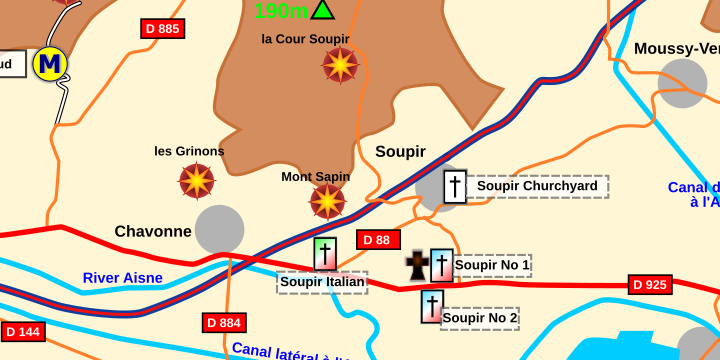 Towards the end of August 1914 the sound of gunfire was already approaching this small village nestled between the spurs at the foot of the Chemin des Dames.

On 3rd September the local bridges were blown by the engineers and that same evening the first Uhlans (German Lancers) arrived in the village. They did not stay for long as at this stage of the war the cudgel of the German right wing was hammering both the French Army and British Expeditionary Force back towards Paris and the Marne.

At the Marne, the German advance was brought abruptly to a halt, and by 12th September the German front line was back in Soupir ; only this time in retreat with the BEF hot on its heels.

The British though were exhausted and were unable to push the Germans much further.

On 2nd November the Germans launched a heavy assault on the village from the north and swiftly took it from the French garrison, but their conquest was short lived as within days Senegalese troops put them back out again.

Thus, the scene became set with the Germans digging themselves into the hill crests and creutes (underground quarries) above Soupir, whilst the French used the cellars and tunnels under the village.

The two Divisions of the French VI Corps were instructed to take the strong points around and above Soupir before advancing against Laon. They were to be assisted by a Special Detachment consisting of a regiment of Territorial Infantry and two Battalions of Senegalese soldiers.

At 0600 hours on 16th April 1917 the soldiers of the 56e Division d’Infanterie (DI) on the right and the 127e DI on the left were poised in their trenches; ready. It had been a cold night and a heavy mist hung over the woods and hill crests but everybody was confident, their hour had come, the high command was sure of victory. It is very easy to make the comparison of less than a year earlier on 1st July 1916, when British soldiers were told that they would be able to dander across no man’s land to obliterated trenches.

The 56e DI had the task of fighting through the woods to the north of Soupir, mounting the steep plateau, crossing the Chemin des Dames and descending into Chavignon on the other side.

Almost immediately the soldiers found that the barbed wire in front of them was quite intact. The 132e Régiment d’Infanterie (RI) managed to get into the German first line but at a cost of 160 dead and 382 wounded. Pinned down by machine gun and artillery fire the French looked on as German reserves poured down the hill.

To their left some of the 106e RI managed to get through the woods but they were also then stopped by the defensive fire.

The Germans were well prepared for the attack behind almost untouched defences. The French barrage required the soldiers to advance at 100 metres every three minutes but this was quite impossible under the conditions and their protection rolled away over the hill like some ominous storm.

Efforts by the Division to get the barrage brought back again were met by Général Mangin’s tirade that : …the artillery preparation could not possibly have left the Germans any means to form a machine gun line. The men were simply too hesitant to attack.

The left flank of the VI Corps was the 127e DI and they were intended to attack towards the north-west in the general direction of Fort Malmaison.

Immediately in front of them was the steep slope around the Mont Sapin (At the base of which now stands the Italian Cemetery) and the village of Chavonne a kilometre to the west.

The taking of this ridge was the key to the entire sector. If it could be taken then the valleys on either side would be opened up for some considerable distance.

On the right of Mont Sapin the 172e RI attacked through the woods around Soupir using a Company of flame-throwers to flush out defenders but even then, it was a hard day’s fighting to reach the plateau.

Once there though they managed to liaise with the 25e Bataillon de Chasseurs à Pied (BCP) who had taken Mont Sapin after a hand to hand, grenade to grenade, blood bath against determined defenders.

Both Units had found the first lines easy enough to take but then the greasy slope of the hillside took time to climb and the German machine gunners were given a free hand once the barrage had moved over them.

The fight for the village of Chavonne by the 355e RI was a flow of attack and counter attack throughout the morning. With the slow progression on their right the Regiment finally managed to gain control of the village and started their assault on a stronghold known as the Grinons just above the village.

This area is marked on modern maps as Crinons and was a warren of underground caves and tunnels. The fighting there ran on into the 17th April when the Senegalese soldiers of the Special Detachment forced their way in.

The Senegalese had been targeted by German propaganda as depraved natives who practised primitive rituals on their captives and many of the Germans were terrorised by the idea of falling into the hands of the Africans.

The fight for the heights of Soupir would last until about the 20th April by which time both the 56e DI and 127e DI had reached the Chemin des Dames in places and dug in. Malmaison still held out though and the cost for such a short advance had been high.

The evening meal on the 16th had not been eaten in Laon and wouldn’t be until almost the end of 1918.

There are four large cemeteries in Soupir as well as a CWGC Burial ground in the churchyard.

If you have been following my general tour of the Chemin des Dames continue on towards Vailly-sur-Aisne where you will find the CWGC Cemetery next to the French Military Cemetery. Follow the signs for Soissons and you will drive past the two of them on your right – within the town.

From there if you have not already done so it is a simple matter to visit the Fort de Condé.

That will bring you to the end of this guided tour of the Chemin des Dames.

There are other things to see, but I haven’t had the chance to visit everything. I hope however that this short guide helps you discover an area that is neglected by visitors from the UK.

On the other side of Soissons in the Forest of Retz there is further evidence of the part played by the British not only in 1914 but again in 1918. But that will have to do for another time perhaps.

Soissons and the Forest of Retz