La Ville aux Bois lès Pontavert is a village approximately twent kilometres south-east of Laon. It can be easily reached on the D 1044 (old number N44) towards Berry-au-Bac or from Soissons via Pontavert (D 925).

The La Ville-aux-Bois British Cemetery at La Musette, sits at the junction of the D 1044 and D 89 on this busy main road.

Do not confuse the two Pontavert villages — they are quite separate. In French the word lès (Note the accent) means near to and can be seen in many village names. 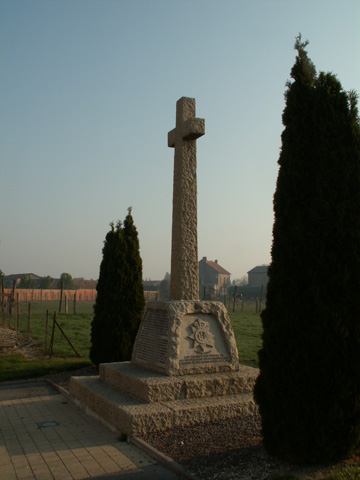 As the Germans launched their Spring Offensive on 21st March 1918 — the Kaiserchlacht — the 2nd Bn Devonshire Regiment was rushed up to St Christ to the east of Amiens in order to hold back the German advance whilst the Royal Engineers detonated the bridge.

The fighting was particularly brutal as wave after wave of Germans tried to dislodge the Devon’s. Unable to do so and in accordance with their new style of attack, the German storm troopers pushed on around the bridge by crossing elsewhere and by the 25th were threatening to cut the Devon’s off altogether.

Forced to make a fighting withdrawal the battalion retired with the rest of the Fifth Army until the German advance petered out. In the space of a week the battalion had lost a third of its effective strength.

On 26th March 1918 Général Foch was nominated as Commander in Chief of the Allied forces following a meeting at Doullens.

The British would no longer be trying to guard the ports and the French Paris. They would be united under one guiding hand ; a hand which proposed forming a general reserve which could be made up by transferring tired British Divisions to a quiet area on the French line relieving fresh French Divisions.

And so, on 12th May 1918 the Devon’s were moved to a nice quiet spot near Berry-au-Bac on the old battlefield of the Chemin des Dames. Nothing had happened here since the French had finally taken the ridge at the end of 1917. It would be a good place for the new arrivals to settle in.

Despite these new arrivals, the battalion was still only about 650 soldiers strong — well below its theoretical strength.

The British IX Corps (including the Devon’s 8th Division) had been given the eastern edge of the Chemin des Dames from the Plateau de Californie round to just beyond Berry-au-Bac.

They were situated in between French Divisions making up the French Sixth Army whose commander Général Duchêne had decided that, against all the advice he had been given, he would make any necessary stand in front of the River Aisne instead of behind it.

The General was a somewhat odious character forever ready to growl : “Because I say so”, at anyone who questioned his orders, which now included British generals who were not happy with the idea of putting recruits on a front line that had suddenly turned dangerous.

Word was filtering through that an attack was coming and this was confirmed on 26th April when the French captured two prisoners who eventually informed them that the German Army was about to pounce.

The front line in the area was already quite thinly held and what Duchêne did not realise was that his 22e Division d’Infanterie and their right flank neighbours, the British 50th Division, were about to be hammered off the ridge by almost four times their number of troops.

Operation Blücher: The 2nd Battle of the Marne

At 0100 hours 4,000 German guns and mortars fired off one of their whirlwind, battle opening barrages along a thirty kilometre front.

The Germans had stopped using long winded week of bombardments, preferring to go for the same number of shells in a far shorter time span. The effect was even more terrifying as high explosive and gas shells rained down along the line, behind the line, deep in the rear areas and above all on the allied guns.

All the British and French gun emplacements had been identified and were knocked out within hours ; hardly a round was fired in defence.

The Devon’s position was as the Divisional reserve and they were able to make use of the creutes at the Bois de Buttes where they were located. These tunnelled quarries provided them with some shelter against the tempest of flying metal which was shattering the allied front line.

The Germans considered the Plateau de Californie to be the keystone of the ridge and attacked the British 50th Division with three divisions plus a fourth in reserve. The French 22e DI on the left were faced by five divisions.

The breakthrough was achieved and the Germans had breakfast in the Allied front line.

On the right of the 50th, 8th Division was attacked by over twice its numbers.

At 0400 hours with all communications cut and the tunnels becoming unbearable the Commander of the Devon’s : Lt Colonel Anderson-Morshead, ordered his men up to their battle positions along the northern edge of the Bois de Buttes. What he didn’t know was that the Germans were already infiltrating on either side of him.

By 0500 hours the 2nd West Yorkshires who had been holding the front line had been pushed back by the weight of the German advance. Behind them the 2nd Middlesex who were holding the so called Battle Zone were also being forced backwards.

A few minutes later on the extreme left of the Devon’s, their B Company were the first to see the unusual sight of two German tanks acting as towing vehicles for observation balloons.

Then came an air attack with German aircraft raking the trenches with machine gun fire whilst they reported back to the artillery on changes of the British positions.

By 0700 hours the Devon’s were isolated from the rest of their Division, their three front companies ripped apart and then pushed aside.

In a desperate measure of resistance C Company under Lieutenant Tindall fixed bayonets and charged headlong into the approaching Germans. He and almost all of his men were killed.

By 0930 hours little remained of the battalion apart from a small nucleus of men around their Commanding Officer at his headquarters shelter and a short time later even he was amongst the numbers of the dead.

All but out of ammunition Captain Burke the Adjutant and the remainder of the men managed to hold on for a while longer by crawling out and grabbing what ammunition they could off their fallen comrades.

There is no doubt that this battalion perished en masse.
It refused to surrender and fought to the last.

The swift breakthrough by the Germans was eventually halted on the Marne and in July 1918 the French and Americans would commence a highly successful counter attack led by a man who a year earlier had fallen from grace on the Chemin des Dames : Général Charles Mangin.

That day, 23 officers and 528 soldiers were either killed wounded or captured. The battalion had been wiped out rather than surrender, just forty survivors managed to evade the Germans, cross the Aisne river and swim the canal to make it back to Allied lines.

For their exceptional heroism and self-sacrifice, the 2nd Devon’s and the 5th Battery, 45 Bde RFA (who had fought it out with them) were awarded the Croix de Guerre and Palm Leaf by the French Government.

It was presented to the Battalion by Général de Languishe on 5th December 1918 and can be seen in the National Army Museum in London.

Although the Devonshire Regiment no longer exists, having been amalgamated in 2007 into The Rifles, the green and red ribbon of the Croix de Guerre continues to be worn on the shoulder by all ranks of this new regiment. 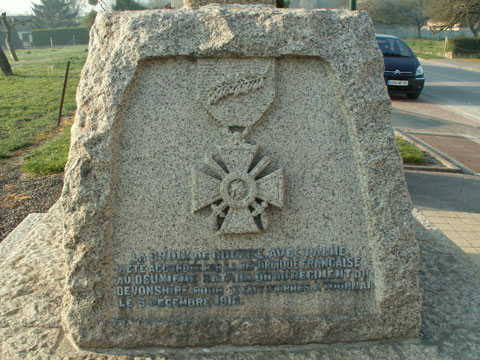 The medal and inscription on the side of the base

Raised in 1918 by the Battlion in memory of the action here on the 27th May 1918 the front of the base carries the citation from the French Fifth Army :

“On the 27th May 1918, at a time when the British trenches were being subjected to fierce attacks, the 2nd Bn Devonshire Regiment repelled successive enemy assaults with gallantry and determination and maintained an unbroken front till a late hour. The staunchness of this battalion permitted defences south of the Aisne to be organized and their occupation by reinforcements to be completed. Inspired by the sang-froid of their gallant commander, Lt Colonel RH Anderson Morshead, DSO in the face of an intense bombardment, the few survivors of the battalion, though isolated and without hope of assistance, held on to their trenches, north of the river and fought to the last with an unhesitating obedience to orders. Thus, the whole battalion, colonel, 28 officiers and 552 non-commissioned officers and men, responded with one accord and offered their lives in ungrudging sacrifice to the sacred cause of the allies”

The Croix de Guerre was awarded for being Mentioned in Dispatches. It could thus be awarded to an individual or a unit. The decoration on the ribbon depended on the level of that citation. In this case a silver palm leaf as the citation came from Army level.

If you have not already done so visit the CWGC Cemetery.

From here it will be a short drive towards Berry-au-Bac where you will find the French Tank Corps Memorial at the roundabout.

On the western outskirts of Pontavert you will find a large French Cemetery with a British Plot. In it is a monument to one of the French Regiments that had taken the area, held by the Devon’s in 1918, during the initial days of the Nivelle Offensive 16/18 April 1917.

From Ville-aux-Bois take the D 89 to Pontavert and turn right onto the D 925.