Situated on the D 1044 just to the north of the town of Berry-au-Bac the monument is easily seen and visited from the roundabout leading to the Junction 14 of the A26 Autoroute. There is plenty of parking space. If approaching from Reims, the road is the D 944.

The old N44 was downgraded to a ‘D’ some time ago. In France that simply means that it is now the Département that pays for its upkeep. However, most Départements already had a D44 so some added 900 and if that still didn’t work 1000.
This results in the old N44 being the D1044 in the Aisne but the D944 in the Marne. 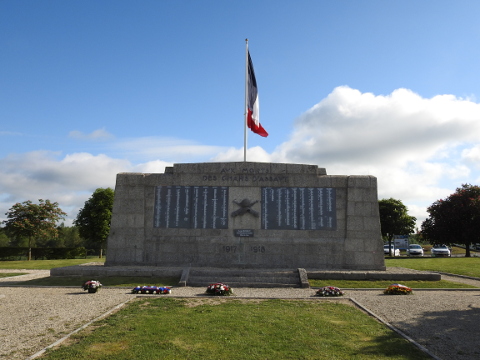 There is no longer a possibility of winning
and the decisive cause of this has been the tank. 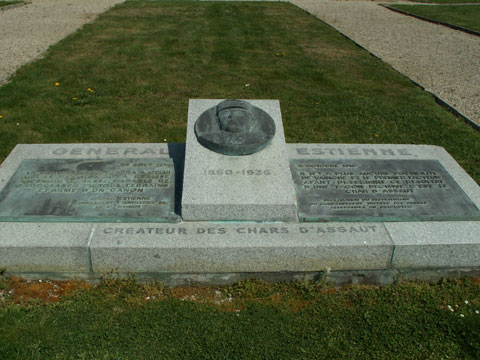 Gentlemen, victory in this war will go to whoever is the first to create an armoured machine capable of crossing all terrain and armed with a 75mm cannon.

Général Jean-Baptiste Estienne was not only a gunner by profession (like Général Nivelle who commanded the French in April 1917) but also an original thinker. He saw quite early on in the war that the problem for his artillery was that having destroyed the ground the infantry were attacking, they — the artillery — couldn’t move over it fast enough.

The infantry needed artillery cover and could only advance as far as that protective curtain’s range.

In 1915 Estienne put forward the idea to Général Joffre (Commanding the French Forces) that time and energy should be applied to developing some form of Land Battleship. He had seen the British heavy guns being pulled into position by American Holt tractors. Why not, he reasoned, armour a tractor and equip it with a 75mm cannon ?

Estienne contacted Louis Renault but at that moment the car manufacturer had no spare capacity or time to even consider such an idea (He would however, within the year, start work on the Renault Light Tank).

As things happened, Eugène Brillié of the Schneider company (an armaments firm) and Jean-Louis Bréton (a politician) were already in the process of developing a vehicle capable of cutting barbed wire and their project was based on a tracked Holt chassis.

When Brillié heard of Estienne’s idea he immediately became interested and the development of the first Chars d’assaut began (literally: assault chariot). 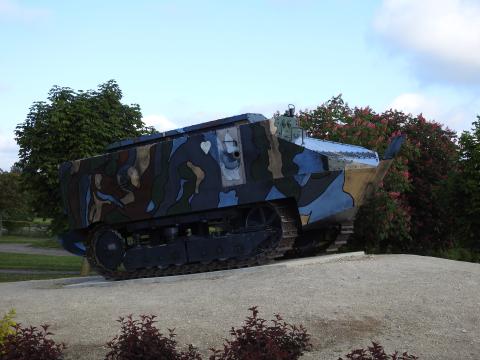 The Schneider CA’s canon could only fire to the right

Despite being encouraged by those who would use the tank, the Schneider tank had some remarkable faults. It’s greatest disadvantage was that it could not fire forwards. It’s canon, a shortened 75mm, was located on the right of the chassis whilst the machine gun was located on the left. The canon was a version of a mortar designed to fire in an arc at long distance making it unsuitable for close range work.

Like the early British tanks, the Schneider’s speed was less than walking pace and it became heavier and slower as soon as it was clear that the Germans had perfected an armour piercing bullet and additional armour had to be applied. Whilst the wire cutting bar at the front may look useful in fact it only helped to immobilise the vehicle if the front dipped into the ground.

The last working Schneider tank belongs to the French Tank Museum. Note how it turns, one of the tracks simply stops and the other forces the tank around.

The Leclerc is twice the size of the Scheider (in the background) but much more manoeuvrable.
It will still rip your lawn up though !

On 30th September 1916 Estienne was made : Commander of the Artillerie Spéciale (Special Artillery) and was raised in rank to Général de Brigade.

By this stage the first British tanks had already made their appearance on the Somme at Flers. Their limited success fuelled great hopes for the future — but the Germans were also quick learners and began widening their trench systems to stop the lumbering beasts being able to cross them so easily.

Like the British, the French had come up with a war winning device but they were not certain how to integrate it into their system.

Then came Robert Nivelle and his battle plans for the Chemin des Dames.

Nivelle liked the tanks and wanted to use them immediately — en masse — whether inter-arm tactics had been worked out and practised or not.

Commandant (Major) Bossut was offered and took on : a secret and dangerous mission. The mission was to form the first French Tank Units.

The tactical unit was a : Groupe d’Artillerie d’Assaut, composed of four batteries of four tanks a piece. Thus, sixteen tanks a group. 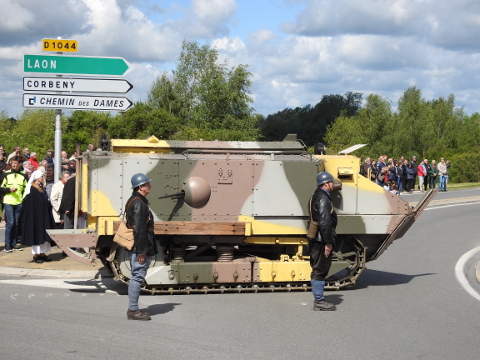 The only working Schneider, from the French Tank Museum

These could then be further grouped together to form larger units which were named after the commander.

On 16th April 1917 Bossut decided to go forward with his creation only to have his own vehicle hit by a shell early on, completely destroying the tank and killing all the crew.

The attack at Berry au Bac 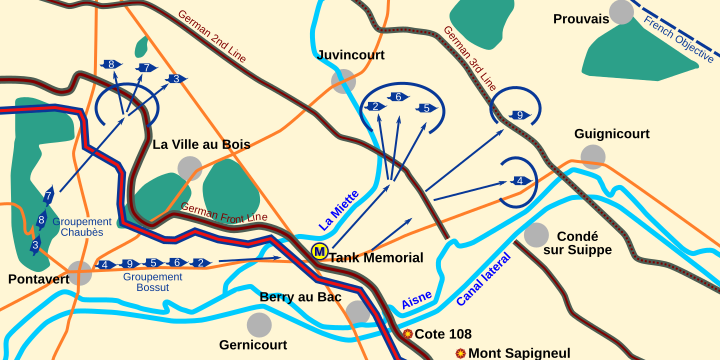 For the attack on the Chemin des Dames two of these larger formations were brought up. Commandant Bossut’s own of five Groupes and a second commanded by Commandant Chaubès of three Groupes. A recovery section completed the formation.

The area around Berry au Bac was chosen because it was nowhere near as steep as the ridge and offered good possibilities for the tanks.

Each of the Groupes was numbered off with an Infantry Regiment and the tactic was for the infantry to advance with the tanks coming up behind acting as mobile artillery.

On the right and attacking to the east of Juvincourt, the Bossut formation made steady progress despite the loss of many of the tanks and their leader early on. They got through the Germans’ second position and kept going only to discover that the infantry were not following on.

With the German artillery observers still actively in place on the Plateau de Californie the lead tanks were forced to retire.

On the left of Juvincourt the first tanks of Chaubès formation discovered on reaching the enemy lines that the Germans had so widened them that the tanks couldn’t get across. This meant that behind them, the rest of the unit couldn’t deploy into battle formation and the column became a sitting target.

Despite the advance made by Bossut’s units the day was a disaster for the French Tank Corps.

Three quarters of the tanks either broke down or were destroyed as they tried to cross the German trenches. Of the 720 crewmen, 143 were either killed or wounded — including their commander Bossut himself.

German gunners would put this experience to good use against the British on 20th November 1917 when the British launched their surprise attack with more than three hundred tanks at Cambrai.

Général Estienne was a firm believer in his creation and after the war wanted his units to be given their own corps. The French High Command, however, decided that they would be assigned to the infantry. 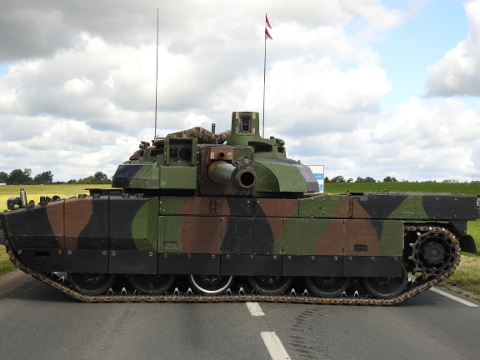 Considered lumbering Leviathanons, Great War tanks were tiny when
compared with their modern equivalents, such as the French Leclerc

At least two other people disagreed with this idea. One was Charles de Gaulle who became a tank commander. The other was Adolf Hitler. The Germans had shown little interest in tanks during the war but made up for it afterwards, their Panzers striking across France with impunity.

Whilst Brillié was working on what would become the Schneider CA1, the arms manufacturer Forges et Aciéries de la Marine et d’Homécourt from Saint-Chamond, Loire, was also given an order to build 400 tanks.

As it happened, the design engineer at Saint-Chamond was Colonel Émile Rimailho, an artillery officer who had worked on designing the famous soixante-quinze field gun. He created his own model of the 75mm canon which he fitted to the new tank. 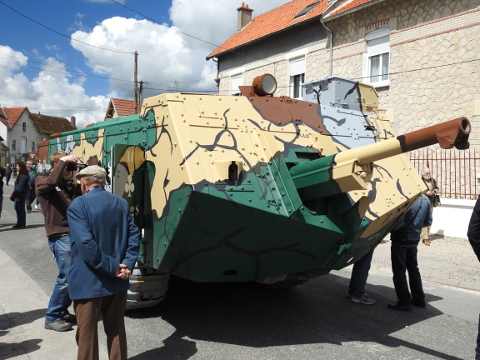 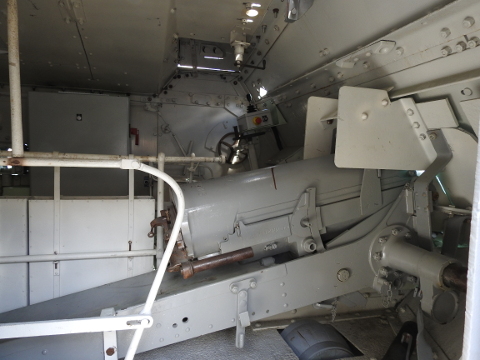 The interior of the St Chamond Tank

Under powered, and like the Scheider without a turret the Saint-Chamond became nothing more than a cumbersome way of moving a 75mm gun forward. Although the gunner could raise the barrel, he couldn’t traverse the gun to hit the target, to do that he had to get the driver to turn the entire tank.

The mother of all modern tanks 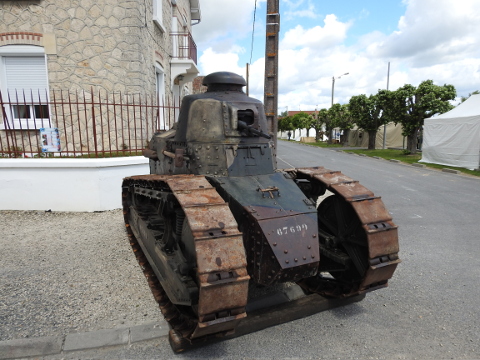 Although their first day in combat had not gone well, a lot was learnt. Better training was needed for the infantry working with the tank crews. The tanks needed better armour and were too slow and liable to mechanical breakdown.

Estienne decided that lighter tanks were more likely to achieve results than the heavy monsters. To achieve success, though, they would need to be used in large numbers.

By 1918 the new Renault FT-17 light tank was available and 3,000 saw service with the French and American Armies.

Capable of travelling at 7 kph and armed with either a machine gun or 37mm cannon the Renault FT-17 (FT — Feeble Tonnage) also boasted the first fully revolving turret. It was thus very much the prototype of all tanks ever since.

This one in the Military Museum in Bruxelles is armed with the cannon. As you can see there was not much room inside for the two man crew.

The Renault became symbolic of the victory and became known as the Char de la victoire. 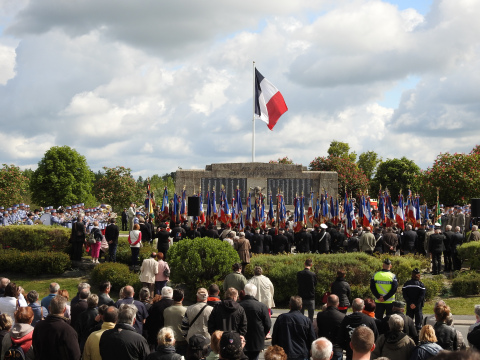 The monument at Berry au Bac was unveiled on 2nd July 1922 in the presence of Maréchal Foch, Général Estienne and Général Mangin.

It sits on the point of departure for France’s first tanks on 16th April 1917 : The Ferme de Choléra.

Like a number of memorials in the area it was designed by Maxime Real del Sarte. 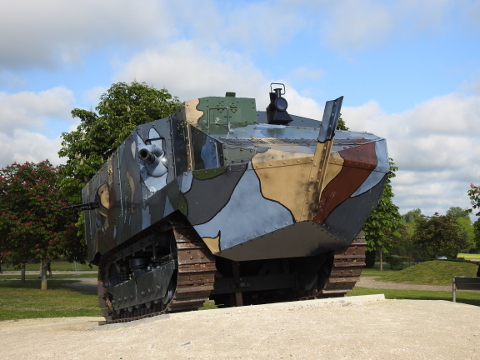 There are a number of explanatory panels in English as well as French. At the entrance to the car park there are two tanks. The Schneider CA1 is a replica created by the community of Berry au Bac for the 100th Anniversary. The other plinth is occupied by a modern vehicle. 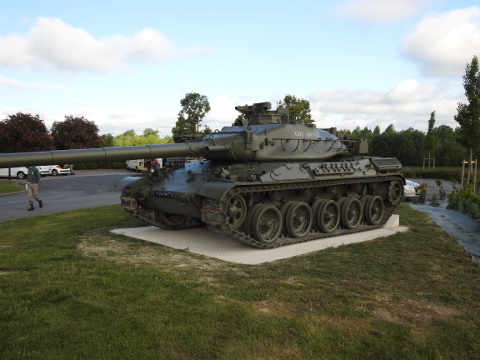 A short drive down the main road will take you into Berry-au-Bac.

Courage and Mutiny at Sapigneul

Immediately in the area at La Ville aux Bois lès Pontavert there is a monument to the 2nd Bn Devonshire Regiment and a Commonwealth Cemetery.

Drive towards Corbeny and you will see the Cemetery on your left. Turning left at the junction by the cemetery will take you into the village.

Taking the D 925 in the direction of Pontavert takes you back towards Soissons via a number of interesting points and cemeteries following along the rear areas of the attack.

It should be remarked that almost all the French Cemeteries along the way have British casualties from either 1914 or 1918 in them.