The official directions state that the Cemetery is situated about twelve kilometres to the east of Soissons alongside the N 31 on the D 14.

This is true but I made the mistake of thinking it was towards the village and it isn’t. The N 31 here is an express and as you come off at the Braine exit you will come to a roundabout. Take the first exit doubling back on yourself along the minor road.

There are signs indicating the two military cemeteries so look out for the Danish flag on the panel. However, once you get there you have to realise that you are there : no signs.

The French cemetery is up within the trees on the right. 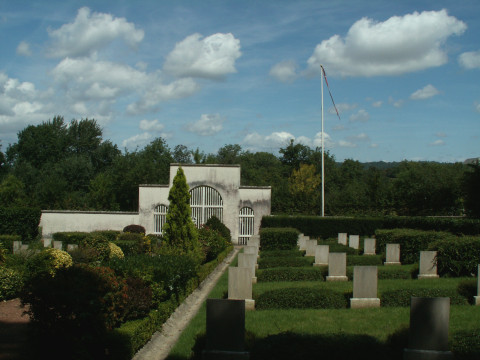 This cemetery contains the tombs of 79 Danish soldiers who fell on French soil during the First World War.

They were all serving soldiers in the German Army.

Their story is a complicated one covering fifty odd years of who was entitled to what part of Denmark/Germany and more to the point — who wanted to live under whose rule.

In essence, the two provinces of Schleswig and Holstein along the Danish frontier with the German border had been argued over for a number of decades and in particular after the death of the Danish King Frederik VII in 1863.

The north of Schleswig was culturally Danish whilst the south and all of Holstein was German and part of the German Confederation (Don’t forget that the Germany of 1914-18 had only come into existence in 1871). However, the Danish King happened to be Duke of both.

The German speaking citizens were alarmed and the Prussian Prime Minister Otto von Bismark suggested military action which was carried out by the Federation, Prussia and Austria.

The Second Schleswig War resulted in a defeat for the Danes and the two Duchies came under Prussian rule in 1866 after Prussia had defeated its former ally Austria.

This suited Bismark down to the ground — or even water level — because he wanted to build the Kiel Canal and couldn’t whilst Holstein was in Danish hands.

In the service of the Kaiser 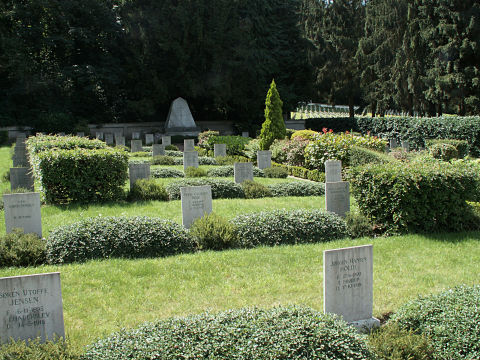 And so those Danes of upper Schleswig found themselves conscripted into the German Army during the war and fighting for a German Empire that they had no great desire to participate in.

Following the Great War, referendums were held throughout the two former Duchies and whilst all of Holstein and southern Schleswig voted to remain in Germany (Schleswig-Holstein) the north of Schleswig was returned in 1920 to Denmark and now forms part of the South Region.

To commemorate the tragic story of its soldiers killed in France a Franco-Danish committee was set up to assemble the bodies of all the Danes killed on French territory into a single cemetery.

The monument was designed by Oscar Gundlach-Petersen and was inaugurated on 7th May 1934. 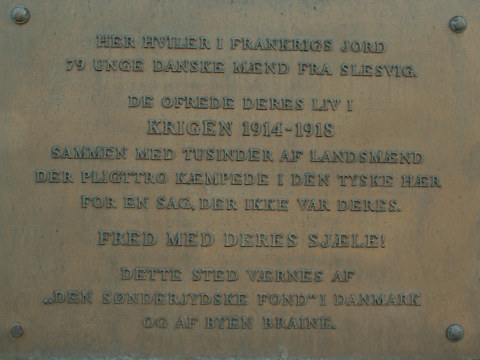 A plaque at the entrance proclaims in French and Danish:

Required to serve with thousands of their compatriots within the German Army they carried out their duty and sacrificed their lives for a cause which was not theirs.

May God grant their souls peace.

This cemetery is under the auspices of the South-Jutland Foundation in Denmark and the town of Braine. 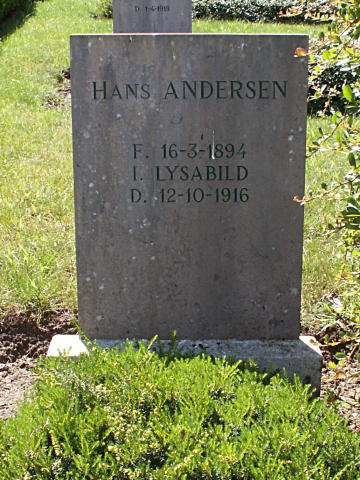 It would appear to me (with very limited knowledge) that many of these soldiers would have served within the German 35th Brigade of the 18th Division.