In preparation for the breaking of this almost impregnable section of the German front line Nivelle massed three armies: Sixth Army (Many of whose regiments were made up of colonial troops) under Général Mangin, Fifth Army under Général Mazel and Tenth Army under the command of Général Duchêne in reserve.

Opposite them was the German Seventh Army under General von Bohm with about 14 divisions to counter the 33 of Mangin and Mazel.

Altogether about 1,200,000 men were massed in readiness for the assault. 500 kilometres of new railway lines were built to supply the attack, and during the build up 872 train loads of artillery ammunition were brought up to supply the 5,341 pieces of artillery. Oh! And 170,000,000 rounds of rifle ammunition.

The troops were in a good spirits and like the British Tommies_on 1st July 1916 the _Poilus believed that this time the German line would give under the sheer bravado and audacity of their attack.

Within minutes in a nightmare repeat of the first day on the Somme, the French were mown down in their thousands. The details of the attack had become known to the Germans who had captured a sergent-major of the 3rd Zouaves complete with the plans on 4th April 1917. It had also been the subject of considerable speculation in all the French papers.

The Germans sat out the preparatory bombardments in their shelters. When the time for the French attack came, the Germans were well prepared.

A Basque Deputy called Ybarnégaray who also happened to find himself commanding a battalion of men into battle commented tellingly :

The battle began at six, by seven it had been lost.

Perfectly sited German machine guns had full command over the French as they attempted to climb slopes that in places are as much as 30 degrees. Units of the French army were obliterated in minutes.

On the first day the French suffered 40,000 casualties and their first use of tanks (Schneiders) on unsuited terrain led to 150 of them being destroyed.

For the colonial troops in Mangin’s Army the weather was completely unsuitable, unaccustomed to the cold, rain and snow they were particularly hard hit. 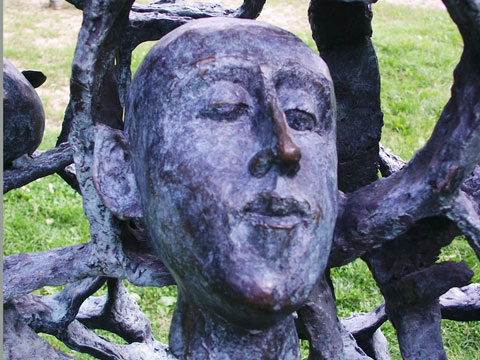 Nivelle refuses to halt the attacks

Despite the fact that he was not making the spectacular breakthrough he had prophesied, Nivelle refused to halt his offensive. Further attacks against the German lines were swiftly brought to a halt.

The Assault continues
Touring the Ridge