Craonnelle is a village a few kilometres to the south of the Chemin des Dames near Soissons.

If following the D 18CD, just after the Caverne du Dragon museum and the Ferme Hurtebise travelling towards Craonne the road forks; to the left the D 18CD (the D 895 on older maps) takes you to the Plateau de Californie. The D 18 to the right, down past this monument and into Craonnelle.

My suggestion is to visit the monument from Hurtebise and then return to the fork and continue towards the Plateau de Californie.

Alternatively from Craonnelle ; take the D 18 out of the village (towards Beaurieux) taking the sweeping right hand junction up towards the ridge about a kilometre outside Craonnelle. 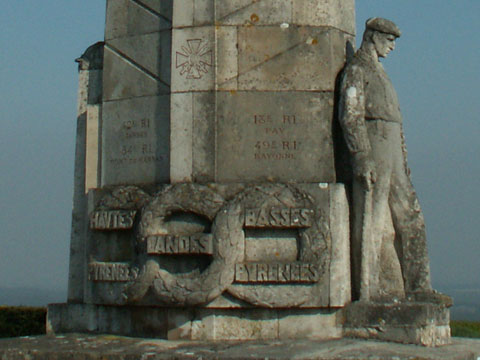 The 36e DI was composed mainly of men from the south-west of France : The Landes and the Pyrenean regions.

It all seems a bit complicated to me but the ancient Kingdom of Navarre, more or less, equated with the Basque Region, straddling the Pyrenees Mountains. Castile eventually incorporated the southern half into Spain leaving the rest north of the border.

On the death, in 1589, of Henri III of France the French were forced to dig deep for a male heir and eventually found one in Henri III of Navarre who was unfortunately a protestant. Forced to chose between a female successor and a protestant, they chose the lesser of the two evils and eventually after a lot of pressure and force of arms Henri IV King of France and Navarre ascended to the French throne (Having changed his religion, declaring : Paris is worth a mass).

Navarre managed to retain a certain amount of sovereignty right up until the French Revolution when they found themselves consumed by the new French Administration.

Notable fishers and farmers the Basques have always been an independent minded people and when war was declared in 1914 many of them felt that it had nothing to do with them. They were Basques and the Germans were fighting, well : the French.

Mindful of the closeness of the Spanish border the local authorities did their best to prevent conscripts from slipping away across the border. What they could do little about though was preventing those who would become eligible for conscription from disappearing.

French boys became eligible for conscription as soon as they reached twenty years of age. There was not a great deal the authorities could do if the eighteen and nineteen-year-olds slipped away quietly to somewhere else.

Pau, the capital of the Basse-Pyrénées (and birthplace of Henri IV) reported thousands missing over the next two years, almost all of whom had taken the traditional route of emigration to Latin America and now felt no great need to come home and defend France (In stark contrast to many British citizens living in Canada).

However, most Basques not only served their military time but did so well, earning their regiments numerous honours.

The 36e Division was composed of :

The Division became particularly associated with this area of the Chemin des Dames having fought here throughout the war.

Initially as part of the Reserve on 16th April they took no part in the fighting but then took over the sector between Craonne and Craonnelle from a shattered 1er DI on 22nd April 1917.

The Regiment from the town of Pau. It was they who had stormed Craonne and the Plateau de Californie above it on the 4th and 5th of May 1917 as Général Nivelle re-launched his ill-fated offensive.

Whilst their initial losses were incredibly light, holding their new found gains proved considerably more costly and amounted to over a thousand men killed or wounded including a large proportion of the officers over the three days of fighting and consolidation. 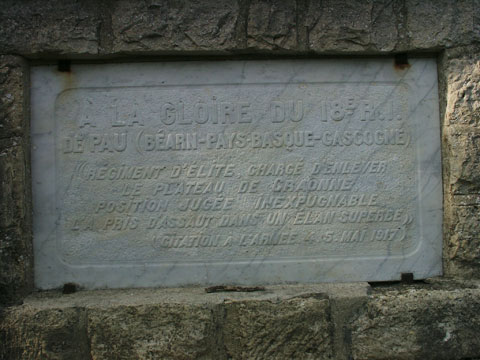 You will see (or have already done so) a plaque on a German bunker on the Plateau de Californie commemorating this amazing feat of arms.

Pulled back from the front to rest, the 2nd Battalion (A regiment had three, which fought together) was billeted at Villers-sur-Fère.

Because of supposed problems with the Basques the authorities had considered limiting the possibilities of them returning home on leave. In reality Leaves of Absence (Permissions in French) were forever behind throughout the French Army.

Now however, the regiment remarked a further decrease in the numbers being allowed home — a sure sign that they were going back to the front again and sure enough, on 1st June the order to march was received.

The 2nd Battalion exploded with indignation, they were being required to go back to the front because another Regiment : the 162e RI had refused to do so (that particular Regiment had lost almost half their numbers fighting in and around Berry-au-Bac).

A large protest took place on the streets, shots were fired, the International was sung and a grenade was thrown into the courtyard of the Inn where the Colonel was dining.

Eventually thirty Gendarmes arrived to restore order and 130 arrests were made. Twelve soldiers were brought before Military Councils and five death sentences were handed down. Others were imprisoned, reduced in rank or sent to Special Sections which probably amounted to being sent on some suicide mission somewhere.

One of those condemned to death was reprieved by the President, three were shot and the fifth managed to escape.

The remainder of the Regiment — including the 2nd Battalion — were back in the lines and fighting off a concerted German counter attack on 2nd June.

The monument was raised at the initiative of the War Veterans Associations of south-west France and local grants helped finance the work.

The architect, Forest and sculptor, Grange were both veterans and decided upon the same stone that had been used to raise the Arc de Triomphe in Paris.

The monument was unveiled in front of a large gathering including veterans and widows on 30th September 1928.

Unlike many of the other military monuments, this one is quite individual in that it represents not a soldier or winged victory but rather a solitary Basque in his traditional clothes and cap looking out across the valley towards farm land : his back turned away from the battlefields.

Behind him is a fourteen metre pylon bearing the Divisional emblem and the names of the Regiments. Wreaths around the base bear the names of the Administrative areas from which the men came.

There are explanatory panels in English as well as a small parking space.

If the fields opposite allow — and taking care not to trample crops — take the chance to look down into the valley.

The Département of the Basse-Pyrénées was renamed Aquitaine-Pyrénées in 1970 which is why you will see it figured on the monument but not on modern maps.

If you are following this tour of the Chemin des Dames you should return to either Hurtebise and turn right along the D 895 continue on towards the Plateau de Californie.

Or, if visiting from Craonnelle return down the D 892 past Craonnelle and on to Beaurieux. From there turn right onto the D 925 towards Soissons. After a few kilometres you will come to Oeuilly.