The Fort de Condé is a wee bit out of the way but well worth the visit. Constructed at the same time and in the same style as the Fort de Malmaison it provides an insight into the construction of these forts.

It is situated in the pocket of the battlefield between Vailly and Laffaux. It is named after the local village of Condé sur Aisne which is situated to the west of Ailly sur Aisne along the D 925 (towards Soissons).

To get to the fort you need to come to the village of Missy sur Aisne which is one village closer to Soissons.

From here the fort is sign posted. As you leave Missy, follow the sign towards the village of Nanteuil la Fosse. A little further along that road, the D 423, turn to your right along a lane which will slowly wind its way up the hillside and amongst the trees. This will also be the route back down again so drive with care and look out for the drainage ditches across the road. 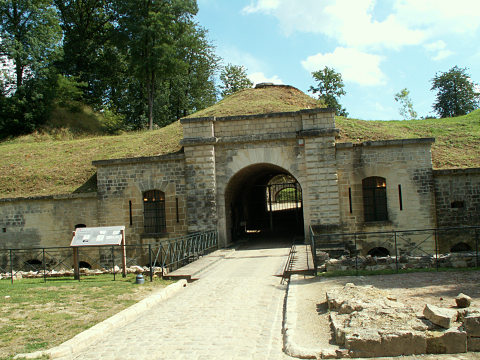 The entrance to the fort

There is ample parking space and a picnic area. Toilets are available at the reception area.

A handout is available which helps you get yourself around the fort and everything is well signposted with information boards in English as well as French.
Allow about an hour for a good wander around.

As Fort Malmaison was crushed to less than a pile of rubble, the Fort de Condé provides us with an excellent alternative.

The Fort de Condé was constructed between 1877 and 1882 as part of a defensive system designed by the Director of Engineering Général Séré de Rivières.

Following the defeat by the Prussians in 1871 this new system was supposed to guard the eastern approaches to Paris should the first line of defence fail (that of Verdun to Belfort).

Initial proposals soon became concrete as the land was bought up and builders were assigned. The initial cost was reckoned at about 1.8 million francs — but even back then this was found to be short of the actual figure when a number of extras had to be added in.

Eventually in 1881 the builder who was charged with both Condé and La Malmaison quit and had to be replaced. The difficulties had got the better of him.

Just getting the armoured turrets up the hill was a nightmare and a half, with special tracks being laid and steam locomotives crawling their way up the steep slope.

It would take the best part of the first half of 1881 to haul the two turrets to their allotted positions and only in December would the Artillery services sign off the work.

Two years later in 1883 the fort was declared finished.

In 1885 two Companies from the 67e Régiment d’Infanterie (about 500 men) were assigned as its first garrison, whilst all around them technical work continued as signalling systems and wells were added.

The place bristled with guns but as tests of new melonite shells at Fort Malmaison had proved these new forts were already obsolete. The new shells simply blew them to pieces — even the French gunners were initially horrified by the new power in their hands.

It was thus decided to reduce the fort to the nature of a simple barracks for some 650 officers and men. Stables were provided for a dozen horses, a forge was set up and a small infirmary added which could take eighty patients.

Its situation so close to the Chemin des Dames had it within the front lines almost immediately and both French and Germans would use it throughout the battles of the First World War.

It was taken by the Germans without a fight on 1st September 1914 and remained in their hands despite efforts by both the French and English to dislodge them during the German retreat from the Marne in September.

In the opening phases of the Nivelle offensive on 16th April 1917 the Germans left the fort having booby trapped it beforehand. Fortunately the French Engineers were on hand and dealt with the hidden mines.

The American General Jack Pershing came up here with Général Franchet d’Esperey to watch the final battles of the campaign in October 1917.

The following year the fort was back in the firing line as the Germans swept in and retook it on 28th May 1918 during their Blitzkrieg assault on the weakly held Franco-British lines.

The gamble of the Spring offensive though had been placed and lost and on the 7th August the French pushed the Germans northwards in Général Foch’s counter attack which had begun the final acts of the war.

Following the war the fort fell into ruin until it was eventually bought by the local commune of Chivres Val ; because the locals needed the stone. It could well have been totally dismantled if it had not been for a local couple, M and Mme Potier who organised an association to try to save not only the fort but many of the other local stone edifices as well.

With the aid of other communes in the Aisne Valley the fort has been put back on its feet and has been declared an Historic Monument since 2001.

It provides numerous events and expositions throughout the year so a look at their web site before visiting is well advised.

Take the time to read the panels as you make your way around. Looking carefully at the plan in your guide you will realise that although it looks like a maze the warren of tunnels does make sense.

From the entrance boutique you pass through the officers quarters into Courtyard No 1 with one of the armoured casemates on your left and the entrance to the galleries in front of you. 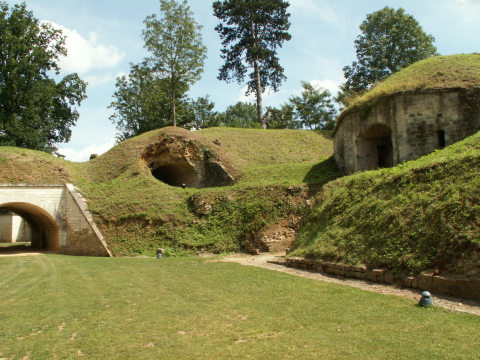 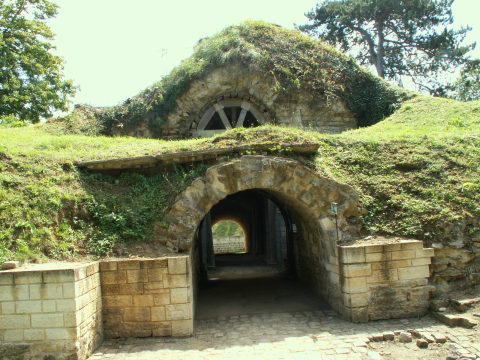 Part of the system of these defences (and it is the same for the great fortresses around Verdun) is that once the enemy had managed to get over the outer ramparts they found themselves in a ditch with high walls in front of them (Escarpment and counter-escarpment). 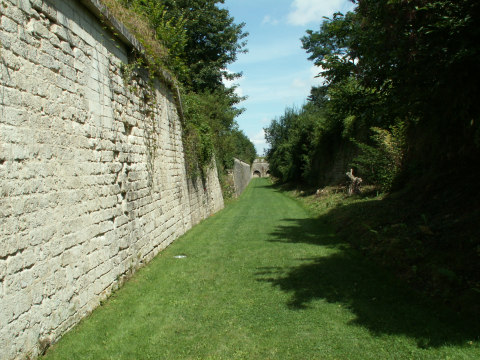 From within the front ditch
In the distance the firing gallery

At the top of the front face is a diamond shaped fortification gained by means of a tunnel. The outer ditch goes out and around it, so giving it its name. This jutting structure allowed the defenders to fire down the front ditch as well as the left flank ditch. 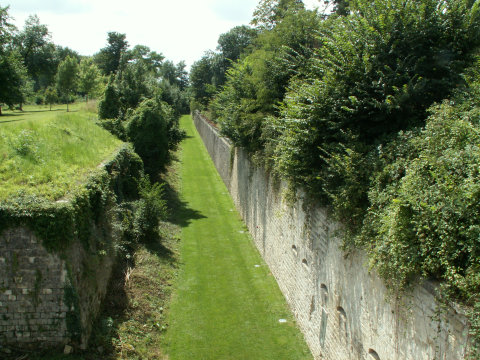 The French defenders would have been using Hotchkiss machine guns from some positions whilst you will also note as you approach that the shooting ports are high up and almost vertical. They are in fact at the foot level of the French defenders. As the enemy approached the wall they would be shot at from above without being able to shoot directly upwards into the protected chamber. 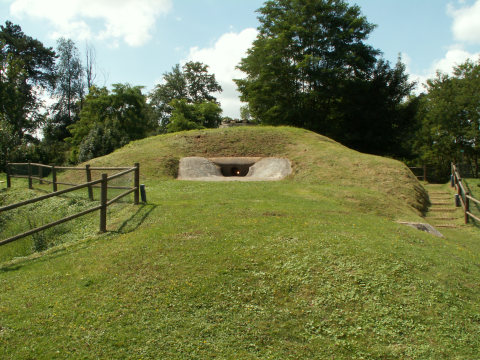 Opposite the firing gallery and within the fort is a second armoured casemate. In some cases the gun was in a turret that could be raised or lowered. Here the chamber has an armoured covering which can be raised to protect the gun. 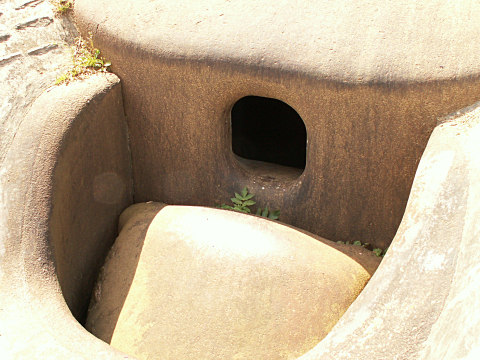 The armoured cap in its lowered position 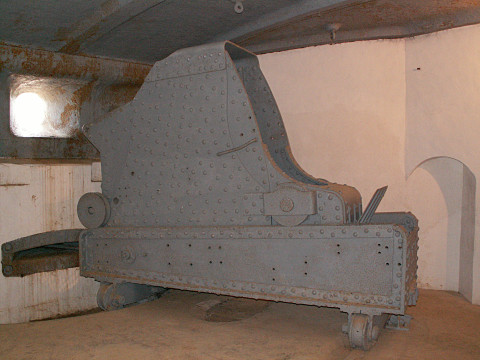 Inside the turret the 155mm cannon could be moved in an arc to increase its field of fire. 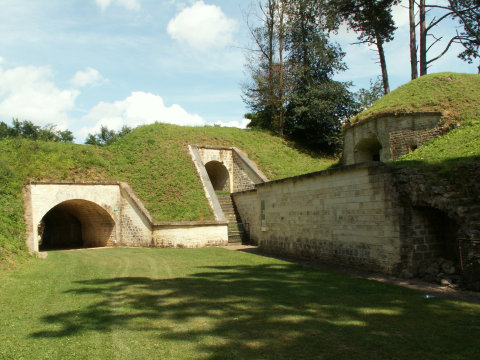 From the casemate you come back out into one of the interior courts near to the old stables, the latrines and the soldiers quarters. 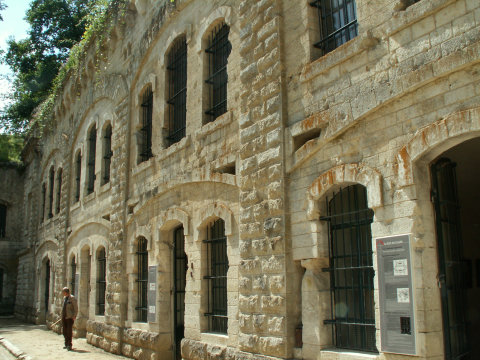 In the buildings to your right you will often find expositions connected to the war or local life.

From the fort you are well placed to carry out a tour of the Chemin des Dames Ridge scene of much bitter fighting in 1917.

For a guided tour of the major sights follow my general introduction and itinerary.