This cemetery sits on the western outskirts of Soupir village on the D 925 between Vailly-sur-Aisne and Bourg-et-Comin.

It sits at the junction of the D 88 for Soupir and coming from Vailly could be missed as it is in part hidden by trees. From the other direction however the front gates are easily visible. 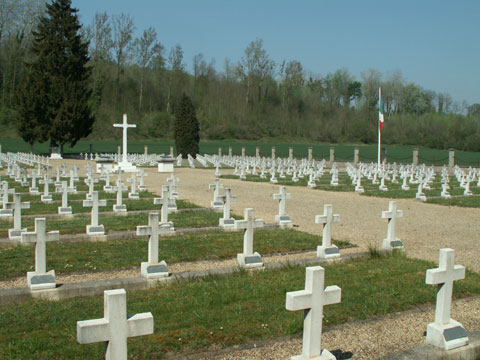 This area is known as Mont Sapin and was the subject of fierce fighting throughout the war.

The 2nd Italian Army Corps arrived in France on 25th April 1918 as a sign of mutual aid from the Italian Government. Under the command of General Albricci the Corps consisted of the 3rd and 8th Italian Divisions. They were initially positioned alongside French Divisions near Verdun in order to acclimatise themselves to conditions on the Western Front.

Four months later on 15th July 1918 the Germans attacked in the opening of the 2nd Battle of the Marne. The Germans struck either side of Reims, in what was to be their last offensive of the war.

The attack on the eastern side of Reims against Général Gouraud’s First Army came to a grinding halt on its first day. The western prong against Degoutte’s Sixth Army made better progress and established some semblance of a breakthrough.

Reinforcements from the French Ninth Army plus British, American and the two Italian Divisions were all used to shore up the front. The German offensive was brought to a halt and then pushed back. On 20th July 1918 the Germans ordered a retreat and by 3rd August 1918 they were back on their starting lines.

Following their participation in this success the 2nd Italian Corps was positioned on the river Aisne just south of Soupir below the Chemin des Dames on 22nd September 1918. On 1st October they took Soupir and spent the remainder of the month fighting along the Chemin des Dames as the Germans were slowly pushed northwards.
A short account of the fighting in Soupir during 1914 – 1917 can be found here : 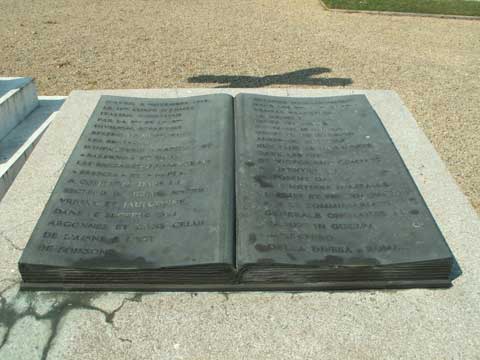 There are two major Italian cemeteries in France, one is at Chambrecy on the Marne with 3,040 graves and an ossuary of 400.

This, smaller cemetery, contains the bodies of 593 Italian soldiers, the majority of whom fell in fighting along the Chemin des Dames.

In the centre of the cemetery and either side of the flag pole there are two open books in bronze. The one on the left is in French the other Italian.

From April to November 1918 the 2nd Italian Army Corps, made up of the 3rd and 8th Divisions (The Brescia and Alpi Infantry Brigades) fought in the Reims sector between Vrigny and Jaulgonne, in the Ardennes sector and in this one of the Aisne to the east of Soissons fighting under the 5th, 10th and then 3rd French Armies.

The Italian forces commanded by General Alberico Albricci suffered more than 9,000 soldiers killed during its victorious campaigns. 592 of them rest in this Military Cemetery created and maintained by the Italian Ministry of Defence. 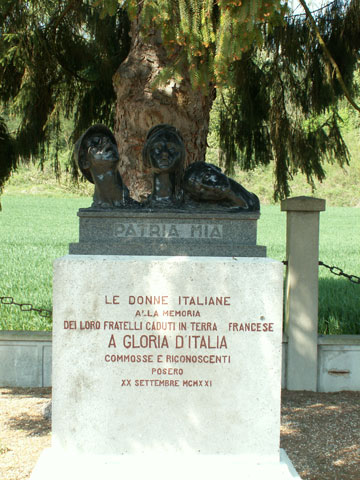 At the far end of the cemetery and under a tree is a small sculpture by Fernad Cian erected in 1921 on behalf of Italian women honouring the memory of all Italians who had fallen in France.

Some Italian prisoners who were used as labourers by the Germans died behind the German front line and were buried in either France or Belgium.

Continue on towards Vailly-sur-Aisne where you will find the CWGC Cemetery next to the French Military Cemetery. Follow the signs for Soissons and you will drive past the two of them on your right — within the town.

That will bring you to the end of this guided tour of the Chemin des Dames.

There are other things to see, but I haven’t had the chance to visit everything. I hope however that this short guide helps you discover an area that is neglected by visitors from the UK.

On the other side of Soissons in the Forest of Retz there is further evidence of the part played by the British not only in 1914 but again in 1918. But that will have to do for another time perhaps.

Soissons and the Forest of Retz