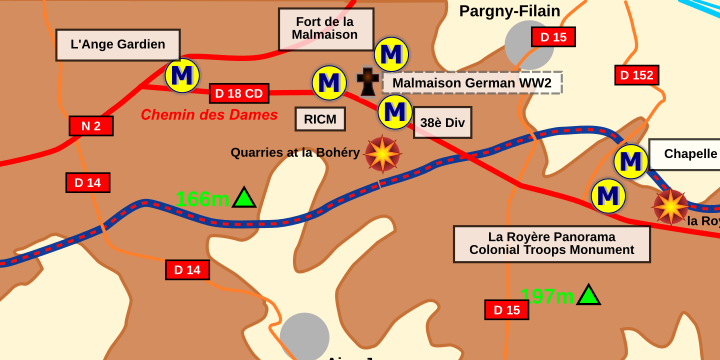 Coming from Soissons the entrance to the Chemin des Dames (D18CD) at the crossroads of l’Ange Gardien is marked by a Calvaire. The location is now effectively on the D 23 in the direction of Chavignon. There is parking but the intersection is a complicated one with multiple roundabouts. 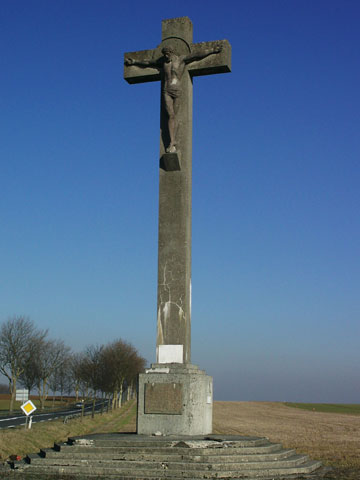 The cross was erected in 1924 by public subscription to commemorate all the French soldiers who fell during the battles of the Chemin des Dames and Malmaison. 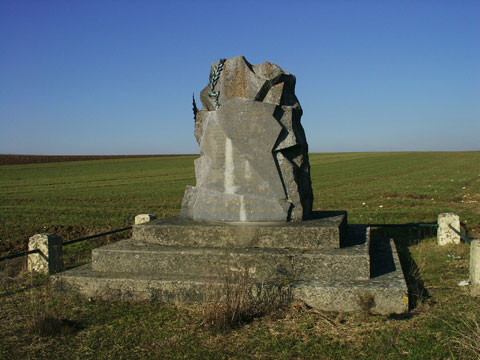 A couple of kilometres along the Chemin des Dames you will see this block of granite erected in 1934, commemorating this celebrated Regiment’s taking of the quarries at la Bohéry on the southern slope on 23rd October 1918.

Under the command of Lt Colonel Debailleul the Regiment not only managed to take the quarries but also the trenches held by the Prussian Guard who had been told to defend them to the last.

Even then the Regiment pushed on for a total distance of 2.5 kilometres under heavy fire and sustaining heavy losses. They took all their objectives and captured 950 prisoners and 10 guns.

The battle in this area over the next few days acted as the lever on the German positions. Once their right had been eased open it was impossible for the Germans to remain on the ridge.

The Soldatenfriedhof at La Malmaison

Almost immediately after the monument you will reach the Soldatenfriedhof at La Malmaison.

This is a Second World War German Military Cemetery containing about 1,200 soldiers gathered from smaller graveyards in the area. It is remarkably different from their First World War cemeteries. To begin with it is far more spacious. The graves are only two to the cross not the usual four. There is a visitor’s centre and an enormous cross. 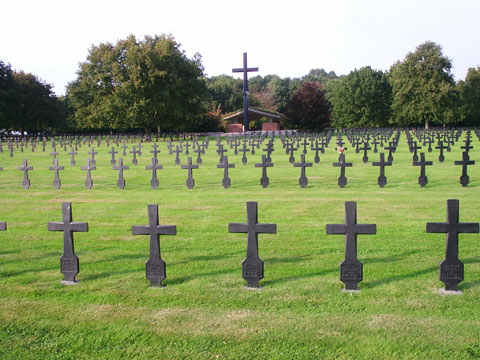 I have to say that I find it rather strange. Somewhere deep inside me is the feeling that whilst the German Soldiers of the First World War were fighting for their country, there was something far more sinister in the ideals of the Nazi Government that was directing them in the Second. I would have expected there to be more embarrassment about the German dead from the second war than the first.

Not wishing to miss out in the monument stakes the 38e DI (to which the RICM belonged) also erected a monument at Malmaison right next to the entrance to the cemetery and on the road down to Malmaison Fort.

It states how the Division which also included the 4e Régiment de Zouaves-Tirailleurs (and thus young Taillefert — whose memorial is at Laffaux) and the 8e Régiment de Tirailleurs Tunisiens stormed the fort and surrounding area.

It also states that the 4e Zouaves in taking the fort took 600 prisoners, 17 guns and numerous machine guns. It was for this action that they received their 6th citation.

Citations in the French Army were a little like Mentioned in Dispatches for the British. The difference being that for regiments they acted on a cumulative basis earning collective medals and the right for its men to wear lanyards representing the citations (you will notice that even today some French regiments have a lanyard).

In this way soldiers got to wear something that marked the achievements of their regiment. As the citations increased so the lanyard changed colour.

The RICM received ten citations and her regimental colours and soldiers wore not only the distinction of the Croix de Guerre but also the Legion d’honneur.

If a soldier was Mentioned in Dispatches he received the Croix de Guerre with a range of different stars attached to the ribbon according to the level (Regiment, Division etc.) of the mention.

Continue down the side of the Cemetery a few hundred metres to Fort Malmaison.