Soupir is a village situated on the D 925 between Bourg-et-Comin and Vailly-sur-Aisne. 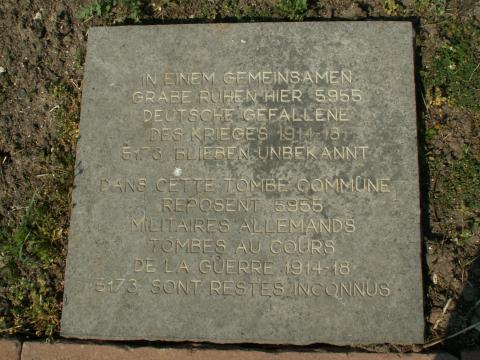 The cemetery was initially created near a Casualty Clearance Station during the fighting of 1917. It was used to bury both French and German soldiers.

In 1920 it was decided to regroup the bodies from smaller cemeteries and as many of the bodies were of German soldiers the German Military Cemetery was adjoined to the French one. There is no barrier or fence between the two just the sudden change from grey stone to white crosses.

German soldiers had been buried next to the French Military Hospital, and so, like its neighbour the German cemetery was extended in 1920, in this case in order to receive German soldiers from 143 different locations within a thirty kilometre radius.

There are 11,089 German soldiers buried here. 5,134 have their own graves (19 of them unknown soldiers : unbekannt) whilst a further 5,995 are buried in the mass grave in the centre of the cemetery.

Of these only 794 were identified and there names are marked on plaques along the pathway.

After an initial refurbishment of the cemetery by the Volksbund (The German CWGC) in the Thirties the wooden cross were replaced by those of stone in 1972.

A short distance further on towards Vailly-sur-Aisne will bring you to the Italian Cemetery at Mont Sapin.