Webmatters : The Battle of Cambrai 1917

Following the battles of the Somme and Verdun in 1916 the new German Commanders on the Western Front : Field Marshall von Hindenburg and General Ludendorff decided that they needed to shorten their front line.

In October 1916 RFC pilots noticed that there seemed to be a lot of digging going on in the area of the villages of Bullecourt and Quéant some twenty kilometres behind the front line. Then an escaped Russian prisoner gave the information that thousands of them were building bunkers for the Germans near St Quentin fifty kilometres to the south of Bullecourt.

Towards the end of February 1917 the Germans began Operation Alberich. This involved not just the retirement to a shorter and more formidable defence line but also the razing of the territory they were leaving behind. Buildings were dynamited, trees cut down, orchards burnt, bridges blown. Nothing was left intact.

The Germans called their new defensive system the Siegfried-Stellung.
The British called it the Hindenburg Line.

The word Stellung in this context means : a system, and the German word gives a far more accurate idea as to what these defences entailed than the English translation.

First came an outpost line which was lightly held and intended merely to act as a warning system. Behind it a belt of barbed wire a hundred metres thick ran in front of the front line. The trenches had been dug so that the tops of them would be at least three metres wide. It was felt that this would severely hamper any attempt to cross them by tanks.

Dotted along the trench systems was a system of concrete bunkers protecting the machine gunners. The bunkers were laid out in a mutually supporting fashion and the barbed wire jutted out in triangles to funnel attacking troops into the field of fire of the machine guns.

Behind the front line was a similarly created support line and behind that a support system which duplicated the front and support lines. To round it off a further defensive position known to the Germans as Siegfried II and to the British as the Masnières-Beaurevoir Line had been raised. The entire defensive system thus ran to perhaps six kilometres in depth and would take enough time to cross as to give the German Command adequate time to bring in reserves for a crushing counter attack.

On 24th October 1917 the Austrian Army with a large helping hand from the Germans crushed the Italian 2nd Army at the battle of Caporetto. During the rout that followed 650,000 Italian soldiers were killed, captured or wounded — half the army’s strength. Suddenly Italy looked on the verge of collapse.

Then another ally took a turn for the worse. Russia, already in the throws of political turmoil became embroiled in Lenin’s October Revolution (Which by Western calenders took place on 7th November).

The battles in Flanders were grinding to a halt — or more to the point ; wallowing to a halt in the rain soaked fields of mud. In London the politicians were scrutinising the casualty lists in comparison to ground gained. Lloyd George in particular thought long and hard about adding Haig to that list of casualties.

A victory was needed and it happened that some pre-planning had already been carried out for a possible attack in front of Cambrai.

Why then chose Cambrai ?

In April 1917 during the Battle of Arras the formidable Vimy Ridge had fallen to the Canadian Corps under Lt General Sir Julian Byng and as a reward for his success Byng was promoted to full General and given command of 3rd Army (General Allenby having been packed off to Palestine).

On 24th April, whilst the battle of Arras had been taking place, Field Marshal Haig had spoken with his French counterpart: Général Nivelle about the possibility of a combined attack in the area of St Quentin and Havrincourt in order to take Cambrai.

Nivelle’s own battle on the Chemin des Dames was a disaster for the French Army and in May Haig now found himself talking to Général Pétain. If the British didn’t go ahead with their intended assault in Belgian Flanders then Cambrai still looked inviting.

The 3rd Battle of Ypres did indeed take place and one of the consequences was that Byng’s 3rd Army found itself taking over the area to their south in front of Cambrai.

Another consequence — though unknown to the British — was that the Germans considered the Cambrai front as a Flanders Rest-Home for tired soldiers. It was nice and quiet, with not a great deal going on.

In Flanders, tanks had been used but without great success. The ground was waterlogged and smashed to pieces by the constant barrages. The tanks bogged down under their own weight.

By contrast the area around Havrincourt and Flesquières to the south west of Cambrai offered rolling plains over ground all but untouched by cannon fire.

It was ideal for a tank battle — not in the handfulls of the Somme or Ypres but en masse. Hundreds of them.

On 4th August 1917, Brigadier General Hugh Elles commanding the Tank Corps and his Chief of Staff, Lt Colonel John Fuller presented an idea for a full scale hit and run raid led by tanks against the Hindenburg Line. The tanks would smash their way through the German lines in the area of Banteux and Ribécourt drive on to Marcoing and then return to base. 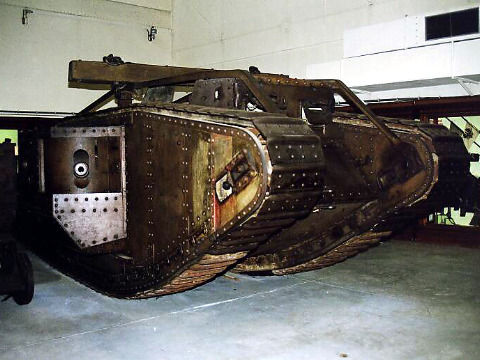 The Mk IV Tank in the Royal Army Museum, Brussel

Instead of trying to coordinate artillery cover, the Royal Flying Corps would bomb German positions. The raid was conceived to take as many German guns as possible and thoroughly demoralise the Germans by highlighting the ease with which the tanks could destroy their defences.

General Byng who had been told to draw up plans for an attack along his front liked the proposals. In return, the Chief of the General Staff, Lt General Kiggell, didn’t. With the fighting still going on in Flanders he replied there would not be enough troops available.

The idea was set aside for Byng to work out the finer details which were completed by the 16th September. Byng informed Haig that he wanted to use a tank led assault supported by five of his Divisions — each of which needed bolstering to the tune of about 3,000 men.

On 15th October Haig told Byng to commence combined infantry and tank training for a date as yet to be set. Operation GY was to be Top Secret and was no longer a simple raid as envisaged by the Tank Corps. Haig wanted and needed a victory. The tanks would smash the line, the infantry would hold the gap and then : the cavalry would pour through, sweeping on to Cambrai and the railway networks beyond.

Elles and Fulton were not the only people thinking of how to wreck German morale. Brigadier General Henry Tudor was the Commander of Artillery in 9th Division which was holding part of Byng’s front line. During the Battle of Arras he had shown great initiative in refusing to conform with the issued orders and deployed a barrage better suited to the ground in front of 9th Division.

Up until now he argued, artillery had relied upon a time consuming and enemy alerting method of ranging its cannons. One gun would fire on a target until it was spot on, at which point the coordinates were passed to the remainder of the battery who then added corrections until they in turn were on target.

This was all very well but at a time when artillery spent a lot of time trying to knock out the other side’s guns, all the enemy had to do was move location once they realised that they were being targeted.

New methods, Tudor continued, would allow the British guns to locate the enemy’s positions and calculate ranges etc to neutralise them.

‘C’ and ‘H’ Sound Ranging Sections of the Royal Engineers would later be involved in locating up to 90% of the Germans’ batteries without the need of a single ranging shot. The German gunners did the work for them !

Working with a listening station and six Tucker microphones distributed across a wide line it was possible using the time taken for each microphone to register the sound of the gun to calculate how far away that gun was and on what bearing.

Tucker was a Royal Engineer who as a corporal had found a way of eliminating the sonic boom of the shell in the recording. This meant that the microphones were listening to the gun and not the shell.

Another method was called Flash Spotting. An observer watched the muzzle flash and then timed how long it took to hear the noise. By using a bearing on the guns and the fact that light and sound travel at different speeds it was possible to gain the range. This was a system that the French had been using to good effect.

The Royal Flying Corps were not to be left out and their aerial photographs were put to work in pinpointing other targets.

On paper it sounds straightforward but there were a lot of variables that had to be added to the mathematical equation : temperature, humidity, wind, wear on the barrels.

The objective was to allow the barrage to commence at the moment of the attack giving the Germans no forewarning of a pending attack.