Webmatters : The Battle of Cambrai 1917, the Tank Corps

In 1914 a track system patented by Hornsby and Sons of Grantham had been sold to and developed by the Holt Manufacturing Co in California for use on their heavy Caterpillar tractors (The company is now known as CAT Inc).

At the beginning of the war Sir William Tritton the Director of Foster and Co Ltd, Lincoln was approached by the War Office with a view to developing one of their renowned heavy duty tractors to pull a 15 inch howitzer. This he did and the basic motor unit, with the addition of Holt’s Caterpillar tracks, was developed in 1916 into the Mk I Tank.

The French started their own construction plans based around Holt Tractors which were also being used to pull guns. The problem and its resolution faced by the two nations was the same. To advance, the infantry needed artillery cover. Having advanced as far as possible with that cover, the infantry now had to wait for the artillery to move up.

Here lay the fundamental problem. The artillery had just turned the landscape into a broken wreck which wouldn’t support the easy transport of heavy guns.

As the French declared: we need a method of being able to drive our field guns across the battlefield with the infantry.

The British team led by Colonel Ernest Swinton had Winston Churchill amongst its supporters and the new fighting machines were initially given the name of Tank (as in: water carrier) by Fosters to hide their actual purpose. The name stuck.

On the 15th September 1916 the Heavy Section Machine Gun Corps (Could they have been any heavier ?) deployed the first ever tanks at Flers on the Somme when forty-nine were used. Whilst they suffered a number of breakdowns they helped achieve an advance of two kilometres, and aided the capture of the three, long sought after, villages of Flers, Martinpuich, and Courcelette.

From here on in the, by now, Heavy Branch Machine Gun Corps were allotted an ever increasing presence on the battlefield though always as a subsidiary arm to the infantry – a few tanks here and few there.

On 27th July 1917 the Tank Corps was formed and took part in the 3rd Battle of Ypres which commenced a few days later on the 31st. Overall, they were not a great success. The ground had been ploughed by the shelling destroying the low-lying irrigation system. The ground was about as unsuitable to tanks as it could have been.

An interesting point is that in 1940 the German Panzer commanders were wary of approaching Dunkerque (in French Flanders) because of the flat and marshy ground.

The Battle of Cambrai would be the first time in history that a major battle had been led by armoured vehicles.

All three of the Brigades, each of three battalions, of the Tank Corps would be used at Cambrai.

Each battalion had a fighting strength of forty-two Mk IV tanks with two supply tanks and four more to act as wire pullers.

The basic structure of command was that each tank was crewed by a (2nd) Lieutenant with an NCO and six soldiers. A section of four tanks was commanded by a Captain and four sections made up a Company headed by a Major. The Battalion was commanded by a Lieutenant Colonel and consisted of three Companies.

Inside the tank there was little room for the men to work. Each track required its own gearsman and two men were allotted to each of the sponsons (the gun turrets on each side of the tank). In the front, two seats were occupied by the commander and his driver — neither of whom could really see where they were going with the very rudimentary periscopes they had or the wee tiny slits provided.

The temperature inside the tank very quickly rose to over 40 C and the addition of the fumes from the engine and discharges from the weapons made the working conditions almost unbearable. The crew frequently burnt themselves on the engine parts and could only communicate with each other by means of hand signals.

Once battle had been engaged every strike on the armour plate caused slithers of the interior to fly off inflicting wounds which became contaminated with the grease and oil the men were working with. 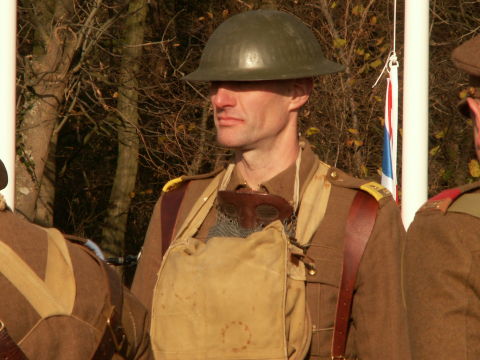 If severely damaged by anti-tank fire the box became a trap. The male tanks carrying 6 pounder guns had doors in the rear of the sponsons but the female tanks equipped with Lewis machine guns offered just two half metre doors under the sponsons. Whilst there was also an escape hatch on the roof this offered no protection at all to a fleeing crew. 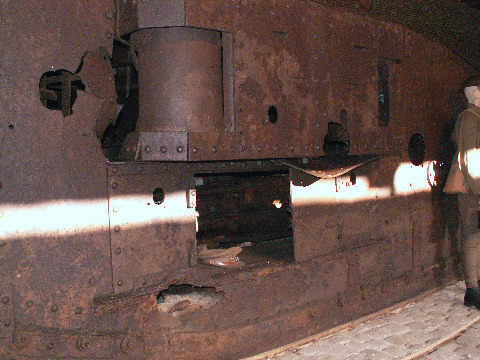 Escape hatch for a female tank

It is hardly surprising that under such conditions a few hours was as much as most of the men could stand before needing a rest.

With vision limited to holes and slits the standard forage cap with its peak was quite impractical and many men chose to wear them back to front so that they could press their faces as close as possible to the observation slits.

A few months after the battle of Cambrai, in May 1918 General Elles tried on a beret of the 70e Chasseurs Alpins and decided that it would be highly suitable for his crews — apart from the fact that white would show up all the grease — so it became black. They thus became the first British military unit to wear the beret, and the black colouring has remained with them as part of their heritage.

General Elles was also responsible for the Corps’ colours : brown, red and green. He had bought strips of silk to make up a flag for the opening day of the battle and all he could find were those particular colours.

Through mud and blood to the green fields beyond

To get to those green fields beyond meant traversing the wide German trenches and this posed a great problem.

To solve it Elles had devised a fascine made up of enormous bundles of wood held together by chains. The term : a bundle of wood, hardly does justice to something which weighed almost two tons, was three metres wide and a metre and a half in diameter. To hold it all rigidly together the chains had to be pulled taught by two tanks.

The fascines were carried on the top of each fighting tank as it went into action. On reaching a wide trench the commander could pull a lever releasing the fascine into the trench ; filling it. The tank could then continue on its way. The same method is still used by modern armoured units with the slight change that the wood is now plastic piping.

The word fascine for the bundles of wood derives from the Latin fascis. Roman magistrates carried fasces (bundles of wood gathered around an axe) as a sign of their power. The symbol of the French Republic includes one and it was also used by the Fascist party of Italy. If you look at his monument, Abraham Lincoln is sitting with one either side of him.

At the beginning of November the 3rd Army began combined training with the tanks. The tanks would crush the enemy defences but needed infantry to protect them. The crew’s ability to see what was going on was so limited they needed people with them to point out possible targets and enemy anti-tank guns.

To encourage the infantry, the tank crews invited them to prepare the hardest defences they could think of, and then proceeded to rip and crush them to pieces. The infantry were suitably impressed.

The general tactic was as follows :

The fly in the ointment was Major General Harper of the 51st (Highland) Division. He didn’t want his men within a hundred metres of the tanks and insisted that slightly different tactics were used. The tanks would have to go it alone with the infantry well behind them. His insistence would cost the British dear.