On the right of III Corps 12th (Eastern) Division had the task of forming a defensive flank whilst the 59th Brigade of 20th (Light) Division came through their two leading Brigades and took up the fight towards the all important crossing points of the St Quentin Canal and the River Escaut (The Schelde by the time it passes through Belgium and the Netherlands).

Although some of the retreating Germans attempted to rally on the slopes in front of Masnières and Marcoing they were brushed aside by the advancing tanks and infantry. The advance became more difficult for the 11th Rifle Brigade (Which is in fact a Battalion) as they entered les Rues Vertes on the southern side of the canal opposite Masnières.

German snipers had taken up position in all the houses and the Riflemen were content to wait on the tanks to pummel the buildings with their 6 pounder guns rather than incur excessive losses in trying to force the crossings.

Towards Marcoing on their left the Riflemen could see dozens of German soldiers trying to get across to the northern side of the canal — hundreds of those who couldn’t were taken prisoner.

The Tanks of A Battalion who were progressing towards the east of Marcoing arrived in the village at 1050 hours and just in time to prevent the Germans from blowing the bridge. B Battalion on the west of the village took up position on the railway embankment and extinguished much of the sniping emanating from the houses.

An hour later soldiers from 6th Division’s 9th Suffolks arrived in Marcoing and began a house to house clearance operation.

To the north-west of Marcoing tanks from H Battalion advanced on a small wood known as Nine Wood. On French maps this is shown as the Bois des Neufs (New Wood). The French word neuf does mean 9 but is also the word for ‘new’ (as in the Pont Neuf in Paris) so the British use of Nine Wood may have been mistranslated.

It was important to suppress any opposition in the wood as it commanded the valley of Noyelles on the Canal below it.

Later that afternoon the 1st Royal Guernsey Light Infantry (29th Division) found itself in action for the first time helping to clear out the wood. 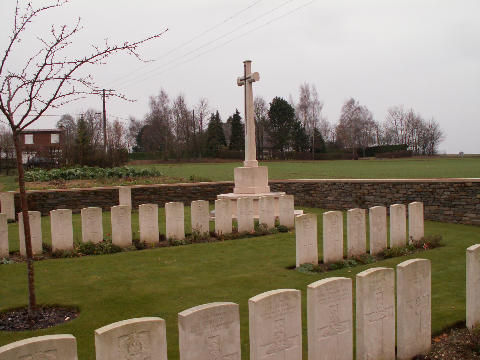 The 1st West Yorkshires had crossed the railway line at Ribécourt (Near the current CWGC cemetery) at 1050 hours and had advanced steadily towards the Premy Chapel Ridge on which stood Nine Wood. As they reached its crest they came into full view of a German field howitzer battery which quickly changed its sights and opened up directly on the Yorkshiremen.

The West Yorksires were no more impressed by this attitude than 9th Division had been at Battery Valley during the Battle of Arras in April 1917 and charged the German gunners at bayonet point.

On the left though the 2nd DLI (Durham Light Infantry) were trying to work their way through the west of Ribécourt and onto the Flesquières Ridge. Here they too came under direct artillery fire and were being harassed from the still untaken village of Flesquières. They charged the guns in front of them and then began picking off gunners from exposed batteries forcing them to either abandon their guns or limber up and canter off.